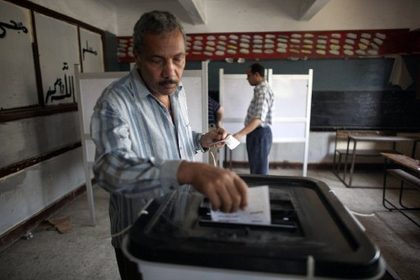 CAIRO, Egypt (AFP) – Egyptians were voting Wednesday, May 23, in historic presidential elections contested by Islamists and secularists promising different futures for the country after the overthrow of veteran dictator Hosni Mubarak.

Queues formed outside polling stations long before they opened at 08:00 am (0600 GMT), with voters in a festive mood.

“It’s a beautiful day for Egypt,” said Nehmedo Abdel Hadi, who was voting at the Omar Markram school in Cairo’s Shubra neighbourhood.

“Now I feel this is my country and I have dignity,” said the 46-year-old woman, who wears a full-face veil.

Across the city, in the leafy Mohandesseen neighborhood, Rania, wearing gym clothes and a ponytail under her baseball cap, was at the front of the line.

“It’s the first time in Egypt’s history we choose our president,” she said, preferring to keep her choice “a secret between me and my ballot box.”

More than 50 million eligible voters have been called to choose one of 12 candidates wrestling to succeed ousted president Hosni Mubarak.

Voting over two days is taking place at 13,000 polling stations, with initial results expected on Sunday. Voting ends at 8:00 pm (1800 GMT) on both days.

A senior interior ministry official said police were on standby across the country and helping soldiers secure polling stations.

The election marks the final phase of a tumultuous transition overseen by the ruling military council after Mubarak was ousted in a popular uprising last year.

After decades of pre-determined results, for the first time, the outcome of the vote in the Arab world’s most populous nation — which also pits revolutionaries against old regime members — is wide open.

According to pollsters, the large number of voters undecided between candidates reflecting radically different trends and the novelty of a free presidential vote make Wednesday’s election almost impossible to call.

Among the leading contenders is former foreign minister and Arab League chief Amr Mussa, who is seen as an experienced politician and diplomat but like Ahmed Shafiq, Mubarak’s last prime minister, is accused of belonging to the old regime.

The powerful Muslim Brotherhood’s candidate Mohammed Mursi faces competition from Abdel Moneim Abul Fotouh, a former member of the Islamist movement who portrays himself as a consensus choice with a wide range of support.

The next president will inherit a struggling economy, deteriorating security and the challenge of uniting a nation divided by the uprising and its sometimes deadly aftermath, but his powers are yet to be defined by a new constitution.

Islamist candidates have promised an Islamic-based project that will meet the revolution’s goals, prompting fears among secularists and Egypt’s Coptic minority over personal freedoms and raising questions over the future of the country’s lucrative tourism industry.

Shafiq and Mussa have vowed to maintain stability and restore law and order but their ties to the old regime sparked fears of renewed protests by those who will feel their revolution threatened.

Candidates have been campaigning across the country for weeks in an unprecedented democratic exercise made possible by the early 2011 revolt.

The ruling Supreme Council of the Armed Forces (SCAF), in power since Mubarak’s ouster, urged Egyptians to turn out en masse to the polls, while warning against any “violation.”

The SCAF has vowed to hand power to civilian rule by the end of June, after a president is elected, but many fear its retreat will be just an illusion.

The army, with its vast and opaque economic power, wants to keep its budget a secret by remaining exempt from parliamentary scrutiny, maintain control of military-related legislation and secure immunity from prosecution.

Mubarak, 84 and ailing, may watch the election from a military hospital on the outskirts of Cairo as he awaits the verdict of his murder trial on June 2.

The former strongman is accused of involvement in the killing of some 850 protesters during the uprising and of corruption. – Sara Hussein and Jailan Zayan, Agence France-Presse