May 24, 2012 1:25 PM PHT
Agence France-Presse
Facebook Twitter Copy URL
Copied
Suu Kyi will leave Myanmar for the first time in more than 2 decades to attend an economic forum in Bangkok 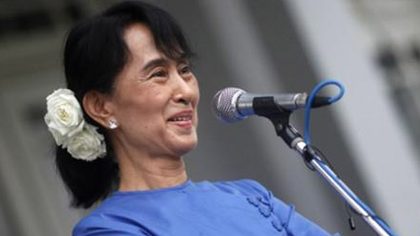 The former political prisoner’s plan to leave her homeland for the first time since 1988 is the latest sign of dramatic political change sweeping through the country, where decades of outright military rule ended last year.

“She will go to the World Economic Forum (on East Asia) in Thailand,” said Nyan Win, a spokesman for the Nobel laureate’s National League for Democracy.

The gathering of senior government officials and business leaders from around the region is being held from May 30 to June 1 at a luxury hotel in the Thai capital.

Myanmar President Thein Sein will also attend the event, according to a government official who did not want to be named.

Suu Kyi was released from seven straight years of house arrest in November 2010 and has now been issued with a passport, enabling her to travel abroad for the first time in 24 years.

She also plans to go to Europe where she will address an International Labour Organization conference in Geneva on June 14.

After that she will make a speech in Oslo on June 16 to accept the Nobel Peace Prize she was awarded in 1991 for her peaceful struggle for democracy, according to the Nobel Committee.

At the time her British husband Michael Aris, who died in 1999 while she remained imprisoned, and her two sons accepted the Nobel medal on her behalf.

Suu Kyi also intends to travel to Britain, where she lived for years with her family, and has been given the rare honour of addressing the country’s parliament on June 21.

The daughter of Myanmar’s independence hero General Aung San was thrust into the limelight as protests broke out against the junta while she was visiting her homeland to care for her sick mother in 1988.

The military crushed the demonstrations and in July 1989 placed Suu Kyi under house arrest, 10 months after she helped form the National League for Democracy.

Despite her confinement, the NLD won a landslide victory in 1990 elections, but the junta did not recognise the result.

She spent much of the two decades since then locked up in her Yangon home and has not set foot outside Myanmar, fearing that the generals would prevent her from returning.

Now 66, Suu Kyi was released in November 2010 just days after another controversial election won by the military’s political allies.

But since then Thein Sein, a former general, has won international praise for releasing hundreds of political prisoners and welcoming Suu Kyi and her party back into mainstream politics.

Myanmar’s relations with the international community have improved dramatically since his nominally civilian government took over. Last month Suu Kyi won her first ever seat in parliament in by-elections.

In response the international community has begun to roll back sanctions against the impoverished country, led by the European Union which has suspended all measures except an arms embargo for one year. – Agence France-Presse