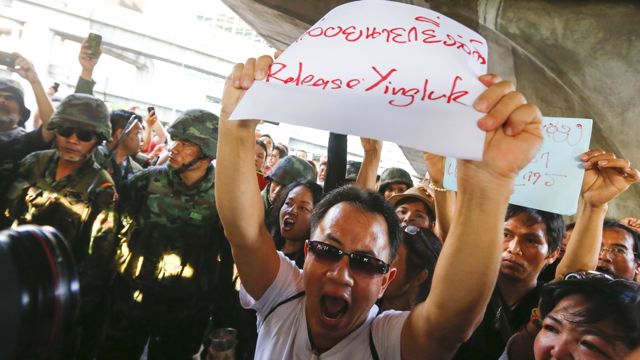 BANGKOK, Thailand (2nd UPDATE) – Thailand’s ruling junta warned protesters it would not tolerate any further rallies against its coup after tense standoffs Sunday, May 25, between soldiers and angry crowds in the capital Bangkok.

Dozens of demonstrators faced off against lines of armed soldiers before and after more than one thousand protesters marched through the city, the largest show of dissent since the army seized power on Thursday, May 22, following months of political turmoil.

The military has detained former premier Yingluck Shinawatra along with scores of ousted government leaders, political figures, critics and academics in a sweeping roundup since the coup, which has drawn sharp international criticism.

The army said demonstrators would be held for one or two days, but could be jailed for up to two years if they kept taking to the streets.

“We will give them a last chance today, but if they continue to rally we will use measures to deal with them,” Lieutenant General Apirat Kongsompong told a press conference.

‘I am not afraid of them’

Protests began outside a Bangkok shopping mall in the Chidlom area, where boisterous demonstrators brandished signs reading “Junta Out” and “Fuck Coup” and pushed armed troops.

Minor scuffles broke out and at least two protesters were taken away by the troops, one bleeding, according to Agence France-Presse (AFP) journalists.

Demonstrators then made their way across the city to the Victory Monument cheered by onlookers, defying a junta call to avoid protests and a martial law ban on gatherings of more than five people.

“I am not afraid of them because the more we are afraid of them, the more they will stamp on us,” protester Kongjit Paennoy, 50, told AFP. “We want an election – to choose our own boss.”

The junta on Saturday, May 24, announced it had disbanded the Senate and placed all law-making authority in the hands of army chief General Prayut Chan-O-Cha.

Civil liberties have been curbed, media restrictions imposed and most of the constitution abrogated. (READ: Human Rights Watch calls for restoration of Thai democracy)

Bangkok has seen several smaller outbreaks of protest against the junta since Prayut launched his takeover on Thursday.

Witnesses also reported demonstrations overnight in parts of the Shinawatra family’s northern power base, with rallies in the city of Khon Kaen and a heavy military presence in Thailand’s second largest city Chiang Mai.

The military intervention is the 19th actual or attempted coup in the kingdom since 1932.

It follows seven months of anti-government protests that derailed elections in February and sought to eradicate the influence of Yingluck’s divisive brother Thaksin Shinawatra, who was ousted from power by royalist generals in a coup in 2006.

He has been in exile since 2008 but critics said he still controlled supportive governments, including his sister’s, from overseas.

Those being held by the junta include politicians and leaders from both sides of the country’s warring protest movements.

Analysts see the latest developments as an ominous signal that the army is digging its heels in and may be unwilling to hand over power to a civilian government in the near term.

Thailand has been rocked by persistent and sometimes violent political turmoil for nearly a decade, with the protests preceding the latest coup leaving 28 people dead and hundreds wounded.

Yingluck was ousted by a court ruling earlier this month, but her embattled government remained in place till last week.

Thaksin or his allies have won every election this century, thanks to their strong support among the working class and communities in the north and northeast.

But he is reviled by parts of the elite, the Bangkok middle class and southerners – an alliance with wide influence in the establishment and army but little electoral success.

The tycoon-turned-politician posted his first public messages on Twitter since the coup on Sunday, saying he was “saddened” by the coup and urging the military rulers to “abide by international law and respect human rights”.

The military said Saturday that Prayut had sent a letter about his takeover to the revered but ailing king, Bhumibol Adulyadej. It said the king had “acknowledged” Prayut’s letter but stopped short of describing the response as an endorsement

The army on Sunday said it would begin paying off outstanding debts of 92 billion baht ($2.8bn) to farmers racked up in a controversial rice subsidy scheme under Yingluck’s government.

The scheme has weighed on the public purse as the economy stutters – shrinking 0.6% year-on-year in January-March – amid falling consumer confidence and a tourist slump as the political crisis takes its toll.

It has suspended $3.5 million in military assistance, cancelled official visits and army exercises and said its remaining Thai aid budget was under question. – Rappler.com