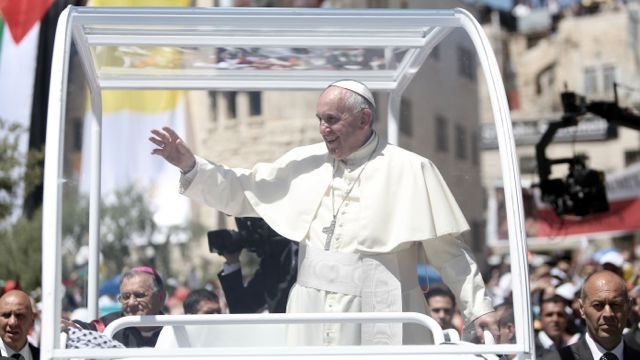 Facebook Twitter Copy URL
Copied
(UPDATED) The pope says, "The time has come to put an end to this situation which has become increasingly unacceptable"

BETHLEHEM, Jerusalem (UPDATED) – Pope Francis came face to face with the daily reality of Palestinians on Sunday, May 25, even touching the controversial separation wall, after calling for an end to the “increasingly unacceptable” Israeli-Palestinian conflict.

The pope has said his three-day visit to the Middle East, which began in Jordan Saturday, May 24, has “purely religious” motives, but he grabbed headlines with a spontaneous stop at the West Bank separation wall, where he rested his forehead against the barrier in prayer.

It was a show of support that Palestinians had been hoping for, weeks after the collapse of US-brokered peace talks with the Israelis.

In an unprecedented move, Francis invited Palestinian president Mahmud Abbas and Israeli President Shimon Peres to his home in the Vatican for a “heartfelt prayer” for peace.

“Building peace is difficult, but living without peace is a constant torment,” he said.

Neither president’s office would explicitly confirm acceptance of the invitation, though Peres’ spokesman said he welcomed it.

“President Peres, welcomes has always supported, and will continue to support, any attempts to progress the cause of peace,” he said.

Peres, 90, steps down at the end of next month.

Francis’s arrival in the West Bank early Sunday marked the start of the second stage of his brief tour aimed at easing an ancient rift with Orthodox Christians and speaking out in favor of regional peace.

“The time has come to put an end to this situation which has become increasingly unacceptable,” the 77-year-old pontiff said.

Flanked by Abbas at his official welcoming ceremony to the Palestinian territories, Francis added: “The time has come for everyone to find the courage… to forge a peace which rests on the acknowledgement by all of the right of two states to exist and to live in peace and security within internationally recognized borders.”

Abbas raised the thorny subject of Jerusalem – claimed both by Israel and the Palestinians as their capital – accusing Israel of “systematically acting to change its identity and character, and strangling the Palestinians, both Christians and Muslims, with the aim of pushing them out.”

Shortly afterwards, the “humble pope”, famed for his defense of the oppressed, halted his open jeep as his convoy passed near the controversial separation wall in Bethlehem erected by the Israelis.

The Vatican admitted the stop was a surprise.

Dressed in his white cassock and flanked by anxious Palestinian security guards, he walked over to the eight-meter (26-foot) high concrete barrier, which is topped by a guard tower.

He rested his hand and forehead on the graffiti-daubed wall, pausing for several moments in front of a scrawled appeal for his help: “Pope we need someone to speak about justice.”

The stop came as the pope was on his way to celebrate mass with 10,000 pilgrims in a packed and colorful Manger Square, next to the site Christians revere as the birthplace of Jesus.

The pope then shared his lunch with several Palestinian families, before meeting with refugee children at the entrance to Dheishe refugee camp. (READ: Pope makes West Bank plea for protection of children)

Israel began building a vast barrier through the West Bank in 2002 at the height of the second Palestinian intifada, or uprising, saying its construction was crucial for security.

But the Palestinians see the barrier, two-thirds of which is located inside the West Bank, as a land grab aimed at stealing part of their future state.

Francis was set to meet Peres in Tel Aviv before continuing his visit with a trip to Jerusalem later Sunday.

Arriving in Manger Square in Bethlehem, Francis was greeted by a choir singing the Christmas carol “Angels from the Realms of Glory.”

Catholic pilgrims had filed past security barriers into the square since dawn.

The scene was dominated by a stage where the pope celebrated mass, decked with huge Palestinian and Vatican flags and adorned with a giant tableau depicting the birth of Jesus.

The Vatican said the main reason for the visit was a meeting in Jerusalem with Bartholomew I, the Orthodox Patriarch of Constantinople, seeking to heal a nearly 1,000-year rift between the Orthodox and Roman Catholic churches.

Meanwhile, in Jerusalem, police arrested 26 Jewish extremists protesting at a site on Mount Zion where the pope will celebrate mass on Monday, May 26. (READ: Pope urges Syria peace at start of Mideast pilgrimage)

In a separate development, Israel’s foreign ministry confirmed that two of the three people shot dead in an attack Saturday on the Jewish museum in Brussels were Israeli tourists.

The incident has drawn condemnation from top Israeli and European officials.

“Francis comes in with a lot of political capital. He’s sort of a new Nelson Mandela, a new moral authority on the world stage,” said John Allen, Vatican expert for the Boston Globe.

“The question is: can he spend that moral capital to shame both sides into talking to each other?”

US-led peace talks between Israeli and Palestinian negotiators collapsed last month amid bitter recriminations, ending a nine-month bid to reach a solution, with no political initiative on the horizon. – Rappler.com