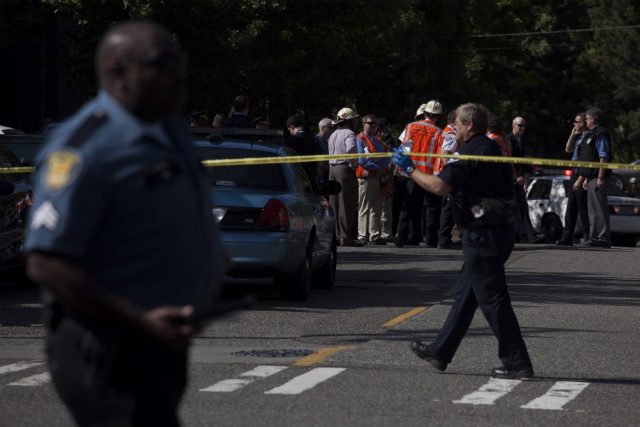 LOS ANGELES, USA (4th UPDATE) – A gunman stormed a college in the northwestern US city of Seattle on Thursday, June 5, and shot four people, one of them fatally, before he was brought down by a student security guard wielding only pepper spray.

In what the city mayor denounced as the latest example of America’s “epidemic of gun violence,” the shooter opened fire on campus with a shotgun and was only halted after he stopped to re-load.

Those wounded at Seattle Pacific University were being treated in hospital. The dead victim was a 20-year-old man who was shot in the upper body and died on his way to hospital.

A young woman in her 20s was also shot in the upper body and was in a “serious condition” and undergoing surgery. Two more young men were hurt, one of them receiving pellet wounds to the neck.

The attacker was armed with a shotgun and a knife. And, in what police said was a sign that he have planned to kill more people, he also carried several additional rounds of ammunition.

“But for the great response by the people at Seattle Pacific University, this incident might have been much more tragic,” McDonagh said.

Police described a “dynamic” crime scene, with investigators still processing the area due to the many witnesses and “a lot” of evidence.

They plan to release the suspect’s name once he has been booked into jail and charged.

The gunman opened fire in a lobby of a science building on the campus.

He was “subdued after being pepper-sprayed by a student security guard,” a police statement said. Initial reports suggested there were two gunman, but police said that proved false.

Mayor Ed Murray expressed outrage that his city had fallen victim once more to the gun violence plaguing the United States.

“Today should have been a day of celebration at the end of the school year. Instead it’s a day of tragedy and of loss,” he told reporters.

Witnesses described their fear as the shooting unfolded, and the bloody aftermath. One student recounted hearing a loud bang from next to the classroom he was in.

His teacher initially thought it was a science experiment, but someone went out and came back saying: “I think someone’s been shot.”

“So we turn off the lights we lock the door and we close the blinds,” the student, identified as Blake, told KIRO 7 TV.

“I was scared for about a minute,” he added, recalling hearing shouting and someone running past the door.

After a couple of minutes, “cops come in through another classroom which was connected to ours and they escorted us out.

“I just saw piles of blood on the ground, just scattered throughout the lobby. And I actually stepped in a puddle….

Police spokesman Chris Fowler described how the young male gunman was taken into custody after opening fire in the lobby of a building on the campus.

He began to reload when a student who was monitoring the building “confronted the shooter (and) was able to subdue the individual,” Fowler told reporters, without directly confirming the death.

“Once on the ground, other students jumped on top of them and they were able to pin the shooter to the ground until police arrived.”

Less than two weeks ago, a reportedly mentally unstable 22-year-old man killed six people before turning the gun on himself at a college campus in Santa Barbara, California. (READ: 7 dead in ‘mass murder shooting’ at US college town)

School shootings have become a tragic periodic occurrence in the United States in recent years. (READ: New US school shooting on eve of Newtown anniversary)

They include the December 2012 massacre in Newtown, Connecticut that left 20 small children dead, and the Virginia Tech shooting in April 2007 in which 33 died, including the gunman. – Rappler.com