Jun 7, 2014 6:10 PM PHT
Agence France-Presse
Facebook Twitter Copy URL
Copied
Mohamed Badie was one of the deposed president Mohamed Morsi's supporters who were arrested in a crackdown that also left more than 1,400 dead 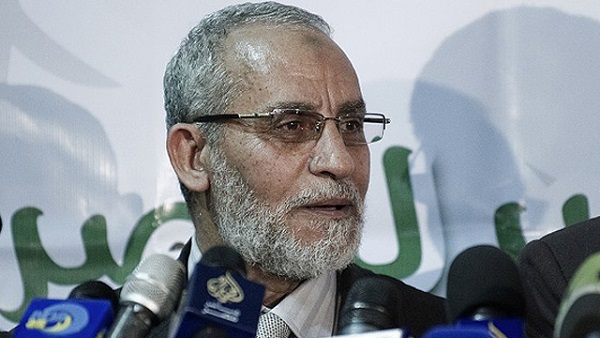 CAIRO, Egypt – An Egyptian court on Saturday, June 7, postponed to July 5 the verdict in the trial of Muslim Brotherhood leader Mohamed Badie and 37 others for inciting violence that killed two people last summer.

But it sentenced to death 10 defendants who are on the run, and a final ruling on their cases is expected the same day once they are reviewed.

After the army ousted Islamist Mohamed Morsi last July, Badie was one of thousands of the deposed president’s supporters arrested in a crackdown that also left more than 1,400 dead.

He is being tried in nearly 40 cases, all of which potentially carry the death penalty, and has already been sentenced to die in one case.

In April, a court in the city of Minya sentenced him and nearly 700 alleged Morsi supporters to hang over the murder and attempted murder of policemen. A final ruling in those sentences is expected on June 21.

Death sentences in Egypt are referred to the country’s top Islamic scholar for an advisory opinion before being ratified. A court may choose to commute the sentences, which can later be challenged in an appeals court.

Defendants tried in absentia also get an automatic retrial if they are ever arrested.

In Saturday’s case, Badie is accused of inciting violence in which two people were killed in the Nile Delta city of Qaliub, only days after the military ousted Morsi on July 3.

Saturday’s hearing was raucous, with the 38 defendants in custody, including Badie, chanting anti-military slogans as soon as they entered the dock.

Defense lawyer Ali Kamal said the death sentences “were expected, given the general climate that (encourages) abuses against the defendants.”

“The prosecution do not provide evidence but the judiciary continues to issue strong rulings”, he added.

After the hearing, Beltagui told reporters that ex-army chief Abdel Fattah al-Sisi, “will be ruined by ruling Egypt.”

Sisi, who led Morsi’s ouster, was elected president last week and is expected to be sworn in Sunday.

Along with Morsi, Badie, Beltagui and Hegazy are being tried on separate charges of mass prison breaks and attacks on police during the 2011 uprising that toppled strongman Hosni Mubarak.

Morsi is due in a separate court in that case Saturday.

He also faces charges of espionage in collaboration with the Palestinian Islamist movement Hamas, and is on trial for inciting the killing of opposition protesters in December 2012 outside the presidential palace.

In March, the same court that sentenced Badie to death triggered an international outcry when it handed down the same sentence for 529 alleged Morsi supporters on similar charges. The judge subsequently upheld only 37 of those sentenced and commuted the rest to life in prison. – Rappler.com