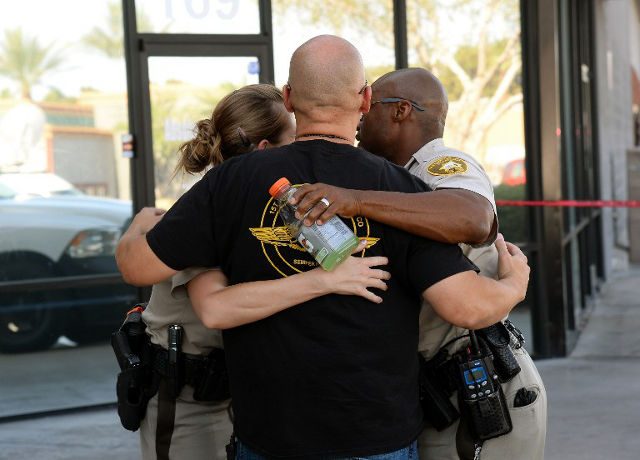 WASHINGTON, DC, USA – Two Las Vegas police officers and a civilian were killed in an apparent ambush Monday, June 9 (Manila time), that ended with the two gunmen killing themselves.

One of the attackers yelled “This is the start of a revolution” before shooting the officers and stripping them of their weapons and ammunition, the Las Vegas Review-Journal said.

Two officers were “ambushed” and shot by the gunmen – a man and a woman – as they ate lunch at CiCi’s Pizza, Sheriff Douglas Gillespie told reporters. One of the officers died at the scene, while the second subsequently died in surgery.

The attackers then ran across the parking lot to a nearby Walmart store, and the Review-Journal said they exchanged gunfire with and ultimately killed a civilian who was carrying a concealed weapon.

The civilian, who has not yet been identified, was found dead inside the front door.

“We will be out there doing it with our heads held high but an emptiness in our hearts.”

The male shooter, described as a tall white man, yelled “everyone get out” before shooting, Assistant Sheriff Kevin McMahill told a news conference earlier.

The two gunmen, who have not yet been named, then went to the back of the Walmart for “some kind of suicide pact,” McMahill added.

Gillespie said a preliminary investigation suggested the woman had first shot the man before taking her own life.

“What precipitated this event, we do not know,” Gillespie said.

“My officers were simply having lunch when the shooting started.”

Gillespie named the slain officers as Alyn Beck, 42, and Igor Soldo, 32. He said they both had young families “devastated” by the tragedy.

Las Vegas police are doubling up their patrols in the wake of the incident. – Rappler.com