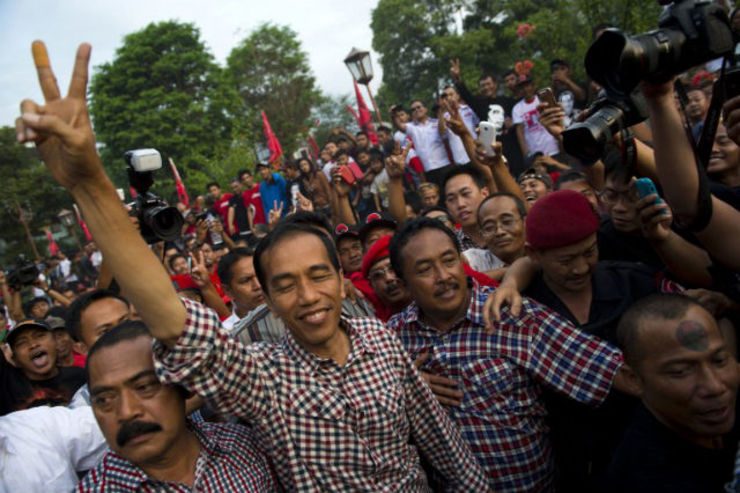 Facebook Twitter Copy URL
Copied
Those in Solo who lived under Jokowi's administration say their city is living proof that despite his gentle demeanor, Jokowi is in fact firm, decisive, and gets the job done.

SOLO, Indonesia – In the Indonesian city of Solo, where powerful sultans once reigned supreme, residents are fervently backing a commoner who transformed their city in his bid to become president.

It’s hard to find anyone in Solo who isn’t wild about their former mayor Joko Widodo, a softly-spoken man with a slight frame better known as Jokowi.

They are hoping he will give the world’s third-largest democracy a much-needed facelift as he did in Solo, a functional yet charming city on the congested island of Java.

But, as the July 9 poll approaches, Jokowi’s once enormous lead over his only rival, ex-general Prabowo Subianto, has shrunk dramatically, and some are questioning whether his man-of-the-people approach makes him too timid to lead Indonesia.

The sprawling archipelago’s public sector is rife with corruption, its economy is slowing, and poverty is widespread. More than half the country’s 250 million people live below or around the US$2-a-day poverty line.

Elected as Jakarta governor in 2012, the 53-year-old Jokowi rose to national fame for pioneering a new style of leadership, visiting poor communities affected by his administration’s plans and getting his hands dirty with public works projects.

But this strength could become a weakness if Jokowi is elected president, political analyst Muhammad Qodari from polling firm Indo Barometer predicts.

“His impromptu visits to communities, going down into the drains and sewers to check on operations was his way of asserting control, but how will he do that at the national level?” Qodari told AFP.

Getting the job done

Those in Solo who lived under Jokowi’s administration say their city is living proof that despite his gentle demeanor, Jokowi is in fact firm, decisive, and gets the job done. During his 7 years running the city he moved slum dwellers into multi-storey flats with working toilets, relocated hundreds of vendors clogging footpaths to a market, and spruced up public parks – solving the kind of issues that plague every Indonesian city.

Many public walls are now painted with commissioned murals, while the city is filled with museums, colorful trishaws, and handcrafted batik shops celebrating its cultural heritage.

“The sidewalks are swept every five hours so we can now lay mats on the ground to enjoy meals,” said Solo taxi driver Budi Purnomo, 31.

Trishaw driver Suprapto, who like many Indonesians goes by one name, was equally enthusiastic.

“It’s stupid not to vote for him,” the 55-year-old said. “This village boy has done an excellent job in Solo and I have no doubt he will do the same for Indonesia as president.”

During a recent trip to Solo, Jokowi was met with throngs of supporters, including housewives, old men in Muslim skullcaps and teenage boys with tattoos and ear piercings.

“I’m certain about a landslide victory in Solo,” Jokowi said to them, as the crowd chanted back: “Jokowi belongs to us!”

A group of women carrying babies in traditional batik slings and barefoot children were seen chasing after his car during the trip, clapping and screaming his name as he left a meeting with a religious elder.

Solo is small city of 500,000 people. But Jokowi has proved himself too in bustling Jakarta, a sprawling megacity of some 20 million people on any given work day.

He has introduced health and education cards for the poor, initiated the construction of a long-overdue metro to ease the capital’s notorious traffic and begun a dredging program to lessen crippling seasonal flooding.

His attention to the everyday Indonesian and his story of humble beginnings has enchanted millions. Born to a timber seller, Widodo was raised in a bamboo shack on a river bank and worked as a furniture maker before becoming mayor.

He appeals to people like Solo housewife Ani Albaini, 40, who says Indonesia is full of leaders “who talk too much” but do too little.

“It’s time they all shut up and get some work done, like Jokowi,” she said. “He is an ordinary man with extraordinary talent.”

Prabowo, a former general, has branded himself as both tough and commanding – a stark contrast to Jokowi – and has promised to clamp down on corruption and bring prosperity to the masses with an iron fist.

Jokowi is known as a man of few words, and was criticized as being too timid in a recent televised presidential debate, which Prabowo dominated with his direct and confident style of oration.

Despite all of Jokowi’s achievements, there are still many who see his manner as a drawback, some even in his heartland of Solo.

Car salesman Muhammad Imam, 45, questioned whether Jokowi had the strength and experience to keep his house in order.

“Prabowo could make everyone toe the line but Jokowi might be too soft,” he said.

“Ruling Indonesia is not like ruling Solo or Jakarta. We need a strong leader like Prabowo, who was a general.” – Rappler.com