Marcos, Prabowo and a failure of memory? Facebook Twitter Copy URL
Copied
With a possible Prabowo win and persistent talk of Bongbong Marcos for 2016, are Indonesia and the Philippines in danger of an authoritarian throwback?

JAKARTA, Indonesia – “It’s like Bongbong Marcos winning as president of the Philippines!”

This is how some Filipinos describe the possible victory of Suharto era general Prabowo Subianto as Indonesian president, a scenario that polls show is becoming more likely as the July 9 election draws near.

Despite unresolved allegations of human rights abuses in East Timor and Jakarta before the fall of the 32-year Suharto kleptocracy in 1998, the former commander of the feared special forces quickly gained ground on popular Jakarta Governor Joko “Jokowi” Widodo, and might end up leading Southeast Asia’s largest economy in the next 5 years.

For some Filipinos and international pundits, the image stirs memories not just of the Suharto dictatorship but also of the martial law regime under the Philippines’ late President Ferdinand Marcos.

“Neither the Indonesians nor the Filipinos have a long political memory,” said Jamil Maidan Flores, a Filipino writer, Jakarta Globe columnist and foreign policy observer who has been working in Indonesia for 22 years.

“I think the Filipino voters now, many of them have an awareness only of political events after the EDSA Revolution and many of the young voters, the 67 million new voters in Indonesia are of an age where they are not aware of political realities in 1998 when Indonesia was in political turmoil so it’s a failure of collective memory.”

With a possible Prabowo win and persistent talk of a 2016 presidential run for Marcos’ son and political heir, are the two countries in danger of a throwback?

Prabowo plays the strongman card to the hilt. Suharto’s former son-in-law infamously made a grand entrance at a political rally on board a helicopter and went on to ride a purebred stallion. While international observers raise the alarm about his dark past including the abduction of student activists, on the campaign trail here, it is a different story. Vendors and bajaj (tricycle) drivers who wait for his arrival outside a wet market in Ciparay, West Java kept harping on one word: tegas.

The Indonesian word for firmness has become a common refrain in the campaign, which analysts often relate to Indonesians’ frustration with the perceived indecisiveness of outgoing President Susilo Bambang Yudhoyono.

Filipino professionals who worked here for two to 3 decades and lived through the Suharto years explain the need for a strong, decisive leader.

Rodolfo Balmater, who put up his own business consulting firm in Indonesia called PT Balmater, told Rappler, “Indonesia has so many cultures. It is very diverse. You have many religions, different cultures from Javanese to Sundanese. You cannot make that quick decision because some people might be having problems so you have to be cunning in handling this.”

In casual conversations, some Filipinos here openly say they are pro-Prabowo and praise Marcos as a “great statesman.” Referring to Singapore’s success under Lee Kuan Yew, they add, “We, Southeast Asians, sometimes need to be spanked!”

Others though draw a line between strong leadership that brings order, and an abusive dictatorship.

“Indonesia would lose much of its moral authority under a Prabowo government,” said one Filipino who refused to be named. “It cannot be as effective and active in human rights.” 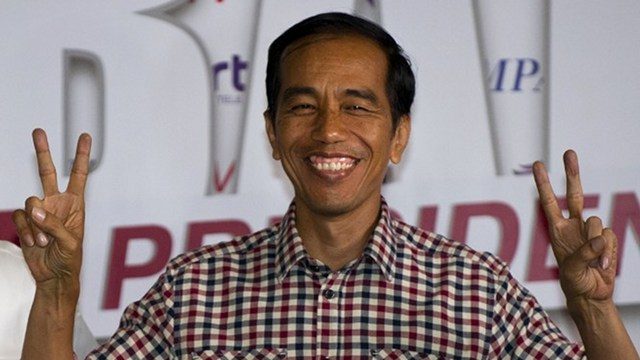 ‘Political will is strong leadership’

Discussions on Prabowo’s strong image contrasted with Jokowi’s reputation as a sincere, incorruptible reformer show one similarity between Indonesian and Philippine politics: the focus on personalities over parties and platforms.

“It is actually a contest between two different kinds of personality. One is humble, approachable, the guy with the common touch versus the guy who is strong-willed and promises to get things done. So the Indonesians have a choice between these two,” said Flores, a speechwriter for the Indonesian Ministry of Foreign Affairs but stressed that his views are his own.

Flores added that Indonesia is looking at strengthening its law against political dynasties, a perennial problem in the Philippines where siblings are together in the Senate, and families like the Marcoses cement their national and local clout.

Coalitions of convenience are also common between the two countries. In Indonesia, parties coalesce to reach the threshold to field a presidential candidate in exchange for ministerial positions. Strange bedfellows are also an old story in Philippine politics, where many parties and coalitions are mere temporary election vehicles.

Filipino Wence Singzon, a Jakarta-based legal and business consultant, said that the Philippines also needs a strong leader, but of a more positive type. He emphasized the need to address the pork barrel corruption scandal and the controversy surrounding the administration’s Disbursement Acceleration Program (DAP).

While Indonesia and the Philippines are young democracies, much has changed since 1998 and 1986. Both countries now take pride in having a relatively free press, a vibrant civil society, and Twitter-addicted citizens.

“People have been very proactive and social media today is very evident and accessed by everyone who has a mobile phone. I feel it’s a sense of belonging for the Indonesian people. From drivers to my principal sponsors in our projects, they are really very politically involved,” she said.

Responding to fears of an authoritarian reversal under a Prabowo presidency, the Jakarta Globe wrote in its editorial that a return to Suharto’s New Order is unimaginable.