Jul 9, 2014 6:08 AM PHT
Jet Damazo-Santos
Facebook Twitter Copy URL
Copied
More than 188 million Indonesians vote on Wednesday, July 9, and make a choice that will have repercussions for the rest of the region and beyond JAKARTA, Indonesia – Wednesday, July 9, is the day of Indonesia’s historic vote. More than 188 million Indonesians will decide on who they want to lead the world’s fourth most populous nation and Southeast Asia’s largest economy for the next 5 years.

It’s a choice between two very different candidates: Suharto-era general Prabowo Subianto, a member of the old guard who promises the strong and firm leadership Indonesia needs, and Jakarta Governor Joko “Jokowi” Widodo, a former furniture maker who rose to national fame with his “man of the people” image. (READ: Indonesia’s presidential election: A primer)

“We see a very strong trend of people liking [Prabowo’s] messages of a strong Indonesia, very decisive, firm and being a leader that could really lead and govern,” Sandiaga Uno, one of Indonesia’s richest businessmen and a spokesman for the former general, told Rappler.

It’s a choice between believing that a military man who has acted without accountability in the past has changed, and breaking from the past and betting on an “everyday man” who critics say lack the experience needed to govern the nation. (For live updates on the Indonesian election, visit Rappler’s live blog)

Outgoing President Susilo Bambang Yudhoyono was, like Prabowo, a top military figure under Suharto who has admitted ordering the abduction of democracy activists. Yudhoyono offered so much hope at the start of his term, but he’s ending it amid criticism he has not done enough to address corruption and other problems in Indonesia. The ruling party that he heads decided at the last minute to support Prabowo.

Today’s election is a choice between an eloquent aristocrat whose fiery nationalistic rhethoric appears to have convinced millions of Indonesians they need him to protect them, and a soft-spoken man from a small town whose collaborative style of governance has endeared him to millions of others.

It’s a choice that has polarized the nation. 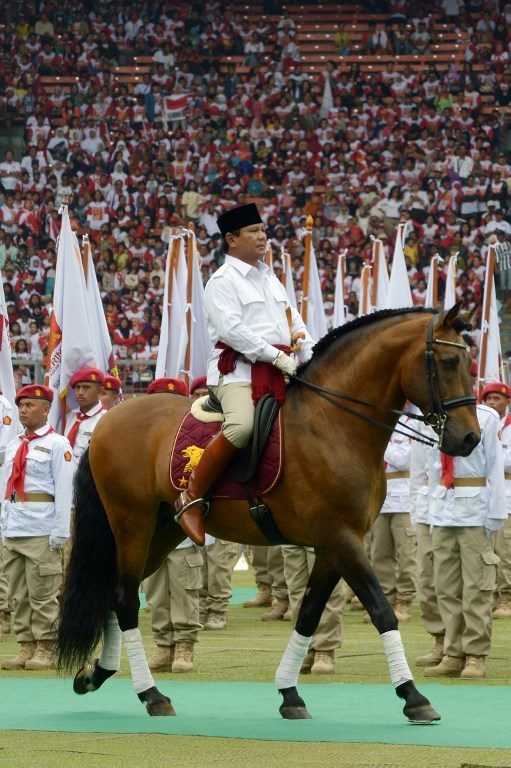 Today’s vote – only the third time Indonesians will directly vote for their president – comes after an intense, highly divisive, and even dirty campaign.

Smear campaigns have painted Jokowi as an ethnic Chinese Christian – huge blows in the world’s most populous Muslim nation with a dark history of discrimination against Chinese. Analysts say these help explain how Prabowo was able to quickly erode Jokowi’s huge lead of at least 20 percentage points over less than 3 months. (READ: Religion, ethnicity and the Indonesian elections)

Prabowo has been called a “psycopath” and a document dismissing him from the military for kidnapping pro-democracy activists in 1997 and 1998 has been leaked.

The country’s media, which only began enjoying freedom after the fall of Suharto, has also been divided. The owners of two of the largest TV groups in the country – MNC TV Group (MNC TV, RCTI and Global TV) and the Bakrie Group (ANTV dan TVOne) – support Prabowo. On the other side, the owner of MetroTV, the leading 24-hour news channel, supports Jokowi.

“It’s very sad,” Endy Bayuni, senior editor at the Jakarta Post, said in a recent forum. “We took years to build trust in free media, it only took one month of campaigning to destroy it.”

With perceptions of a biased media, Indonesian youth – who make up a third of the voters – have turned to social media, a potent force in a country with 69 million Facebook users and two of the most active Twitter cities in the world.

“Social media is like independent media. We are free to give our opinion. We bring together our community because the freedom of speech in social media really matters in this election,” young entrepreneur Johnson Pardomuan said. Over the weekend, more than 2 million Indonesians living overseas already cast their votes at 498 polling centers in 130 countries. A number of reports have come out claiming that exit polls showed Jokowi dominating the overseas vote, but officials and analysts have downplayed these, either painting them as unreliable or stating that they do not represent the 188 million other votes being cast today.

On the ground, Prabowo’s well-funded and well-run campaign machinery that has been preparing for this election for years is seen to be far more efficient and effective than the volunteer-based – albeit chaotic – effort pulled together by Jokowi’s team less than 4 months ago.

Surveys – though proved not entirely accurate by April’s legislative polls – indicate that Jokowi’s once-massive lead has gone down to less than 5 points, a difference that may lead to disputes over results or even violence.

While Indonesia has already successfully held two peaceful direct presidential elections, military, police, and election watchers said the potential for poll-related violence was particularly high this time around given how tight the race for the presidency is.

In total, about 253,000 police, more than 1 million civilian defense, and 31,000 military police have been deployed to ensure safety throughout the country on Wednesday.

A lot is at stake for Indonesia, which is faced with an economy that is slowing, a widening budget deficit, inequality, growing religious intolerance, and massive corruption problems. The world is watching and it needs to ensure peaceful elections happen today.

“Because the laboratory for democracy is here. If we have a successful experiment in democracy, then it is something for the whole world to see. It is something that will help other countries,” foreign policy observer Jamil Maidan Flores explained.

Indonesia is also considered an ASEAN leader, making up about 40% of the regional grouping in terms of the economy and in terms of the size of the population. (READ: Q and A: Why the world is watching Indonesia)

Indonesia’s choice today, therefore, will have repercussions not only for Indonesians, but for the rest of the region and beyond. – Rappler.com