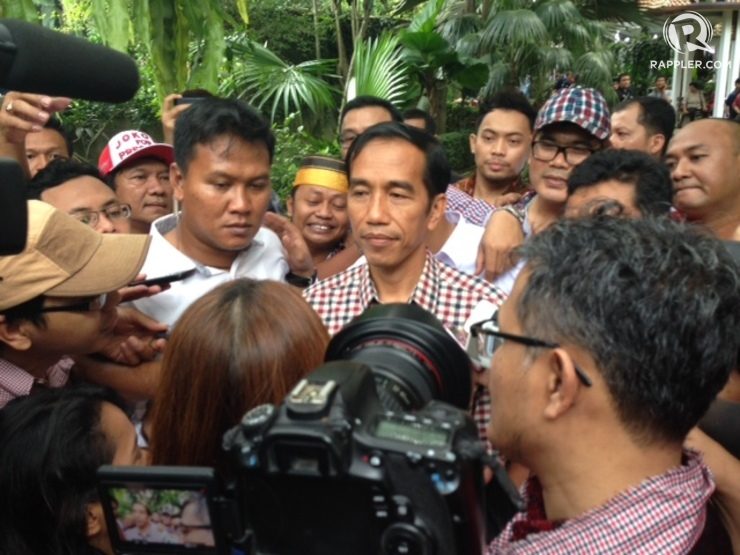 “We take this opportunity to come together based on the quick count results that show that Jokowi-JK are the winners,” Megawati Sukarnoputri, head of Jokowi’s Indonesian Democratic Party of Struggle (PDI-P), said in a press conference at her house in Menteng, Central Jakarta, flanked by Jokowi and his running mate, former Vice President Jusuf Kalla.

The announcement at about 2:30 pm came just 90 minutes after polls closed in the world’s third largest democratic election. Some 188 million people were expected to have voted in 480,000 polling centers across the country.

The Center for Strategic and International Studies (CSIS) and Cyrus Network quick count gave Jokowi-Kalla 52% of the votes over Prabowo-Hatta’s 48%, with 95% of the data in.

“It is time that we safeguard the recapitulation of the results at the regional election commissions and General Election Commission to ensure a clean, honest process with no intervention.”

However, Prabowo team spokesperson Mahfud MD said they were still confident they won, and that their own quick counts showed the former general is winning.

“Victory is on our side,” Mahfud said, adding that the early results were part of psychological warfare.

In a press conference at around 3:30 pm in Jakarta, Prabowo said: “Based on the quick counts of various survey institutes, we Prabowo-Hatta, received the people’s support and mandate.”

“For now, we’ll wait for all the data to come in. Only after more than 90% of the data is in will we declare our actions and position.

“We request all supporters of the coalition and the Indonesian people to safeguard and monitor this victory until the final official count.”

On July 6, Prabowo’s camp posted on its Facebook page the results of 16 surveys – though mostly from lesser known institutes – that show the former general leading with 54.3% over Jokowi’s 37.6%.

A spokesman for Jokowi’s campaign, Anies Baswedan, called on Prabowo and his running mate to behave like “statesmen”.

“For me, all credible survey institutes declared our victory at a minimum of 5 percent,” he said.

It was an unprecedented standoff in Indonesia since Suharto’s downfall in 1998. The only two other direct presidential elections since then were won resoundingly by President Susilo Bambang Yudhoyono.

Yudhoyono was, like Prabowo, a top military figure under Suharto who has admitted ordering the abduction of democracy activists. Yudhoyono offered so much hope at the start of his term, but he’s ending it amid criticism he has not done enough to address corruption and other problems in Indonesia. The ruling party that he heads decided at the last minute to support Prabowo.

Wednesday’s election was a choice between two very different candidates: Prabowo, a member of the old guard who promises the strong and firm leadership Indonesia needs, and Widodo, a former furniture maker who rose to national fame with his “man of the people” image.

The unofficial tallies that Jokowi’s party relied on, known as “quick counts,” have accurately predicted the winner of previous elections.

“What is striking about today is that the most credible and reliable pollsters all have been almost exactly the same,”  Douglas Ramage, an international expert on Indonesian affairs from consultancy Bower Group Asia, told Rappler on Wednesday.

He added that the new quick counts being cited by Prabowo’s campaign had no reliable track record.

However, official results are not due for around 2 weeks, due to the complexity of holding elections across the archipelago of more than 17,000 islands that spans three time zones.

“We haven’t seen the end of this,” Ramage said. – with reports from Agence France-Presse/Rappler.com