Like Indonesia, can PH make corrupt rot in jail? JAKARTA, Indonesia – “Everyone is in touch with corruption from birth until death. When people are born, in some areas, you still need to pay to get birth certificates. The higher you pay, the faster you get it. When you die, you need to get a death certificate. At times, you have to pay more.”

This is how Ade Irawan of the NGO Indonesia Corruption Watch (ICW) describes corruption in his country, a problem so entrenched it involves the highest executive officials and members of parliament to the lowest traffic cop.

It is a story all too familiar with the Philippines, now confronting its biggest corruption scandal in recent history involving lawmakers’ development funds. Yet there is a key difference.

“There is still one institution that people can hope for to enforce the law,” Ade told Rappler, referring to Indonesia’s Corruption Eradication Commission known as KPK (Komisi Pemberantasan Korupsi).

Famed and feared, the KPK is a Ramon Magsaysay awardee that takes pride in its 100% conviction rate, and is hailed as an exception to ineffective anti-corruption bodies in developing countries.

While Manila media reported about the Ombudsman’s blunders in the plunder case against 3 senators in late June, Jakarta’s websites broke the historic life sentence for the former constitutional court chief justice, whom the KPK prosecuted for bribery.

Can the Philippines have its own KPK? 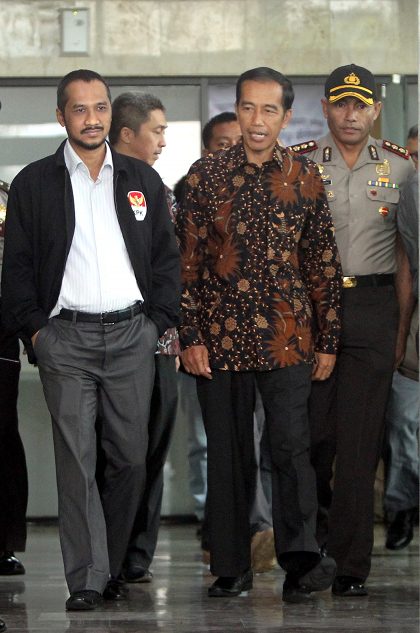 How to fight ‘sophisticated corruption’

Only 10 years old, the KPK is an independent government agency that investigates and prosecutes cases involving at least IDR 1 billion ($86,300 or P3.7 million).

In a country where government transactions always come at a price, the KPK aims for a “shock therapy” by catching the big fish like officials of the ruling Democratic Party, lawmakers, ministers, central bank officials, ambassadors and CEOs. Even the father-in-law of the son of President Susilo Bambang Yudhoyono was not spared.

Journalists sit outside KPK’s lobby waiting for the next arrest in a compound that houses the agency’s own detention facility.

Bambang Widjojanto, KPK vice chairman and commissioner, said the reason behind the commission’s success is no secret. It is found in the 2002 law creating the KPK.

Without any court warrant needed, the KPK wiretaps the phones of possible suspects, and sets up sting operations to catch them in the act.

The KPK also issues travel bans, summons officials, requests bank data, and freezes assets. In contrast, suspects in the Philippines flee and empty their bank accounts long before cases against them are filed.

“We have a control mechanism where we contest our evidence. We invite the investigator, prosecutor, commissioners and others involved. We discuss whether the case should pass, go to the other step, or be stuck in here,” Bambang said. No gifts, no free meals

While the KPK works with police and prosecutors, it develops its own talents that a private headhunting firm recruits. KPK now has a 1,022-strong staff.

“We recruit the best ones. We use what we call multi-tasked background so they don’t come only from the police, legal, but we have others like accountants, those with technology backgrounds,” said Bambang, a lawyer and human rights activist.

The vice chairman said KPK employees get a decent salary but are prohibited from receiving the perks and allowances other agencies get like houses and electricity funds. Even gifts and free meals are not allowed. On display at the KPK office are cellphones, tablets, and expensive batik given to staff. The rest were donated.

It is a standard the KPK is trying to apply to all officials. Government employees and election candidates are required to declare their wealth, which the KPK audits. Presidential bet and Jakarta Governor Joko Widodo famously turned over a guitar from American band Metallica to the KPK to avoid violating the corruption law.

Yet with many Indonesians accepting corruption as a way of life, the KPK also focuses on long-term prevention and education.

With the help of academe and civil society, it studies corruption-prone industries like mining and forestry to identify loopholes and craft action plans. The same goes for processes like customs and taxation, which the KPK masters to fight graft.

The commission also includes anti-corruption in all levels of education but with a creative twist.

“In rural areas, we tell the tale about the value of honesty. This is for the children and we also convert it to animation. Next August, we want to launch video streaming so we can use that to campaign. KPK is the only state institution using radio and TV streaming to campaign against corruption,” said Bambang, whom Rappler interviewed in KPK’s new studio for radio and TV streaming. Still, KPK has much work to do to fight corruption in Indonesia, ranked 114th out of 177 countries in Transparency International’s 2013 Corruption Perceptions Index. It faces the challenge of combating daily forms of corruption outside Jakarta.

For its multi-awarded work, the KPK also earned powerful opponents. Parliament has tried to change the KPK law 16 times to clip its powers. A police chief detective in 2009 notoriously mocked the agency for investigating the police, “How can a gecko hope to defeat a crocodile?”

Despite the political pressures, the commission found a constant ally: the public and civil society groups like ICW.

ICW’s Ade said, “The gecko versus the crocodile. We twisted that word to make it into an acronym that stands for ‘We Love Indonesia. We love KPK.’”

In 2012, when police threatened to raid the KPK office after investigating its most senior traffic officer, protesters, lawyers, activists and journalists soon barricaded the entrance to the building. When parliament refused to release the budget for KPK’s new headquarters, Indonesians launched the fundraising campaign “Coins for KPK” to shame their officials.

“The only institution that fulfills the people’s expectation is KPK,” said Ade. Will PH build on scandal momentum?

Filipino writer and columnist Jamil Maidan Flores, who lived in Indonesia for 22 years, told Rappler that the Philippines should create a body like the KPK.

“There is a fear perhaps of giving too much power to an agency but if it is necessary to curb corruption and if you are able to put in good people with probity in there, I think it would work very well for the Philippines. This is one example of Indonesia that the Philippines should watch very closely.”

In a 2010 study, academic Emil Bolongaita compared the work of the KPK with that of the Philippine Ombudsman.

“In many ways, the Ombudsman can be said to have been designed to fail, engineered to be toothless and clawless from the start,” he wrote.

Bolangaita said the powerful KPK would not existed without the gravity of the corruption problem in Indonesia, the commitment of reformers in government, and the public’s demand to clamp down on corruption.

Commenting on a Rappler article in 2013, Bolangaita said the Philippines can harness the public outrage from its recent corruption scandals to pursue reforms in the law creating the anti-graft court Sandiganbayan, and to amend the Ombudsman Act. (READ: A crisis that should not go to waste)

“The present pork barrel crisis is an opportunity to be seized to make the necessary changes to strengthen these two institutions. For too long, these two have been toothless. It is about time they catch and bite the predators that pretend to be the people’s protectors.”

ICW’s Ade said creating a strong anti-corruption agency is all about momentum and timing.

“If there is no will from the government, the people must push. Most governments would be reluctant to create an institution that is strong enough. We had a transition period in 2002. There was public pressure. That’s very important.”