Why Obama may win or could lose

Jun 3, 2012 10:18 AM PHT
Agence France-Presse
Facebook Twitter Copy URL
Copied
President Barack Obama is perched on a economic and political cliff edge: to one side lies solid ground and 4 more White House years, to the other, a plunge to defeat after a single term 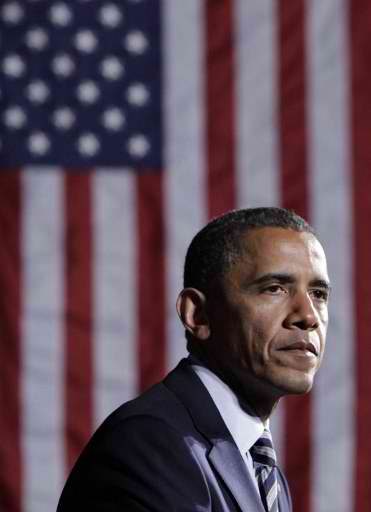 WASHINGTON, United States of America – President Barack Obama is perched on a economic and political cliff edge: to one side lies solid ground and 4 more White House years, to the other, a plunge to defeat after a single term.

Republican candidate Mitt Romney started the week, in which he finally reached the benchmark number of delegates needed to clinch his party’s nomination, being pilloried for appearing with Donald Trump, as the mogul blanketed cable news with claims that Obama is not American-born.

But he ended it as a rise in the unemployment rate to 8.2% bolstered his core argument — that Obama is an economic failure who cannot create jobs.

“The job of the president is to get Americans back to work. He’s not up to the task, he’s over his head,” Romney told CNBC.

As Romney staggered through a Republican primary race strewn with his own gaffes, Washington’s chattering classes saw him as no match for Obama.

But the zeitgeist has shifted.

Indications that Obama may struggle to reach his 2008 fundraising total of $750 million and a report by the Politico news website that outside groups could spend $1 billion to defeat the president have further boosted Romney.

Obama’s early attacks on Romney as a corporate “vampire” have yet to reshape the race and been undermined by some key Democrats.

But in a RealClearPolitics average of national polls, Obama stood at 46% ahead of Romney at just under 44%, and 48% approved of the job he is doing.

That left Obama tantalizingly close to the 50% threshold that would offer strong promise of reelection, but also with zero margin for error. His campaign seems right on the margin of victory or defeat.

A “rising Romney” narrative has been bolstered by other polls showing him leading bellwether state Florida and competitive in western battlegrounds like Colorado and Nevada.

Why Obama may lose

The US economy added an anemic 69,000 jobs last month, and other data suggested the tepid recovery was slowing.

More news like the jobs numbers will undermine an argument Obama made Friday that “we will come back stronger. We do have better days ahead.”

Many Americans simply do not feel the recovery: only a third of those asked told NBC/Wall Street Journal pollsters recently that things were headed in the right direction.

Though Obama argues he created more than four million jobs, a monthly total of 69,000 is not politically sustainable, analysts say.

“If he were creating a quarter of a million jobs or more a month, he would take away Romney’s rationale for running and be reelected rather easily,” said Christopher Malone, a politics professor at Pace University, New York.

Despite insisting “it’s still about hope” Obama is not the inspirational figure of 2008, and may find it harder after four crisis-battered years to turn out his voters.

The mystique of his campaign machine has been tarnished by an untidy roll-out of his endorsement for gay marriage and the sight of top adviser David Axelrod being shouted down by Romney partisans at a press conference.

It is also unclear whether mocking Romney’s argument that his business past will help him rescue the recovery, will stick when voters are looking anywhere for economic relief.

Why Obama could win

Obama strategist David Plouffe famously disdains “bedwetters,” so panic will not be allowed in the president’s camp.

The president does enjoy several structural advantages in the election — he has easier paths to the necessary 270 electoral votes than Romney and could lose a string of states he won in 2008 and still triumph.

Romney must win almost all his target states and realistically, two out of three of battlegrounds Ohio, Florida and Virginia.

Obama, who is yet to fully engage Romney, also holds a big advantage among the pivotal constituency of Hispanic voters.

While many pundits question his governing skills, Obama remains a potent communicator. In Chicago two weeks ago, he delivered a forensic takedown of Romney’s qualifications for office.

Obama’s record as a commander-in-chief who got Osama bin Laden and ended the Iraq war is also a plus, while Romney’s hawkish instincts may jar with war-weary voters.

The president’s team always predicted a close race that may boil down to a personality-based choice between the charismatic Obama and an unpopular challenger who sometimes struggles under pressure.

In a Washington Post poll this week, Obama led Romney 52% to 38% on who had the better personal character to serve as president.

So October’s presidential debates, forums in which a winning personality is often decisive, could be crucial.

“There is this gap out there between perceptions of (Obama) as an individual and assessments of his job performance,” said Andrew Dowdle, a professor of politics at the University of Arkansas. – Agence France-Presse