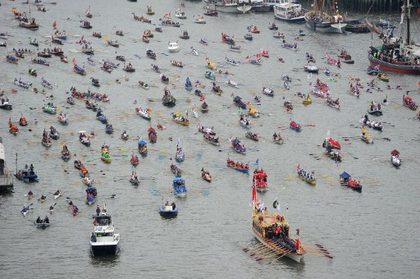 LONDON, United Kingdom (UPDATED) – Queen Elizabeth II sailed Sunday, June 3, on a ceremonial barge at the centre of a spectacular 1,000-boat river pageant on the Thames in the set-piece of celebrations marking her diamond jubilee.

The queen, dressed in a white hat and silver and white coat, was carried down the river on the red and gold barge, with an eclectic collection of boats of all shape and sizes following behind.

As the 86-year-old queen and her husband Prince Philip boarded the barge, the banks of the Thames were thronged with spectators and Union Jacks flew from the balconies of apartments packed with wellwishers. 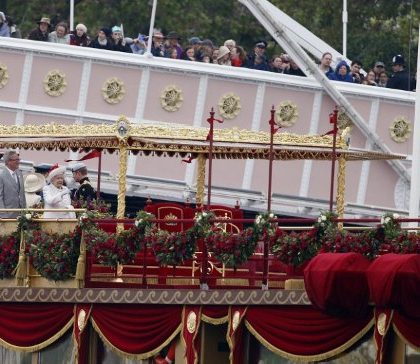 The flotilla was led by a barge carrying eight bells which rang out to herald the passage of the queen’s craft, followed by hundreds of rowing boats, cruisers and steam ships in the biggest pageant of its kind in 350 years.

The queen was ferried to the barge on the launch of the Royal Yacht Britannia, the ship she dearly loved which was decommissioned in 1997.

The heavy rain which had fallen through the night stopped as the queen boarded the Spirit of Chartwell, a converted sightseeing boat.

The monarch was accompanied by senior royals including Prince William and his wife Catherine, who wore a red Alexander McQueen dress, and heir-to-the-throne Prince Charles.

William, the second in line to the throne, and his brother Prince Harry, a fellow helicopter pilot, both wore military uniform.

Behind the queen’s barge was massed a flotilla of steamers and tugs, speedboats and historic vessels, including Dunkirk “little ships” that evacuated British forces from continental Europe in World War II.

The flotilla was led by the belfry barge, in front of Gloriana, which was rowed by quadruple Olympic gold medallist Steve Redgrave alongside injured servicemen.

The flotilla was expected to take four hours to cover the 11 kilometers (7 miles) to Tower Bridge, where the queen will disembark.

While London was the focus of the celebrations, millions of people were holding street parties around Britain to mark the 60th year of the queen’s reign.

Towns and villages were bedecked in red, white and blue bunting for an event that organisers dubbed “the Big Lunch” celebrating the queen’s six decades on the throne.

Charles and his wife Camilla dropped in on a street party in Piccadilly in central London and sat at a table drapped in a Union Jack, chatting with residents.

Some diehard royal fans camped out overnight along the Thames and braved the rain which fell for much of the night to secure a good vantage point.

Nicola Holder, a retired community worker from Devon in southwest England, had put up with “miserable” weather to spend the night on Westminster Bridge to get a good view.

“I’ve never seen anything like this, and I’ve just got so much respect for the queen,” she told AFP.

“I can’t think of any other human being who’s set an example like she has. I think she’s been a very wise lady — as a nation we owe her a huge debt.”

The celebrations come as the royal family enjoys its highest support for decades. That is especially true for the queen, who is only the second British monarch to celebrate a diamond jubilee, after queen Victoria in 1897.

A small group of anti-monarchist protesters was booed and had their chants drowned out with renditions of “God Save The Queen” as they staged a demonstration along the route of the flotilla.

The four-day national diamond jubilee holiday began on Saturday with the queen indulging in her love of horse racing at the Epsom Derby horse race, where she was greeted by flag-waving crowds.

The river pageant on Sunday is by far the most complex part of the festivities, and effectively doubles up as a security rehearsal for the London Olympics that open on July 27.

Some 190 boats will sail alongside the pageant to handle security and respond to any emergencies, while around 5,500 police and 7,000 volunteers will be on standby.

On Monday there will be a concert in the shadow of Buckingham Palace featuring Beatles star Paul McCartney and other top names, before the festivities culminate in the pomp and splendour of a ceremonial parade on Tuesday. – Agence France-Presse