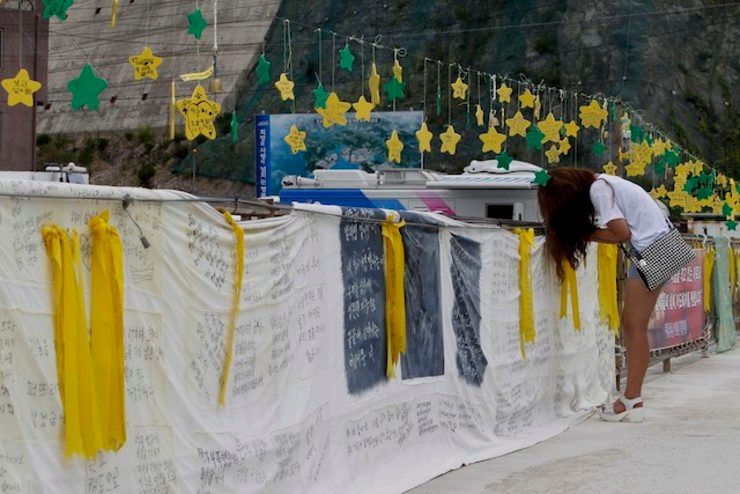 It was the first time the survivors – all from Dawon High School in Ansan city south of Seoul – have given evidence in the trial which began more than a month ago.

Police cordons blocked public access to the district court in Ansan City, outside Seoul, as the students arrived in a red mini-bus and were escorted into the building by a tight phalanx of police officers.

The actual trial is taking place in Gwangju, 265 kilometers (165 miles) south of Seoul, but the judges and lawyers decamped to the court in Ansan to hold a special two-day session for the 17 students who agreed to testify.

Out of concern they might feel intimidated, the student witnesses were not required to appear in the main courtroom, and offered their testimony by video from a nearby room accompanied by a parent.

Their names have not been disclosed and while their evidence was audible in the courtroom, their faces were only visible to the judges and lawyers for the defense and prosecution.

Of the 476 people on board the 6,825-ton Sewol passenger ferry when it capsized on April 16 off the southern coast, 325 were Dawon High School students on an organized outing.

The tragedy, and in particular the loss of so many young lives, rocked South Korea with an overwhelming sense of collective shock and grief.

In the days immediately after the disaster, TV stations broadcast wrenching mobile phone footage taken by one student victim of himself and his classmates laughing and joking about being in the Titanic movie as the ferry begins to list.

As the situation worsens, the students begin to panic, even as the ship tannoy can be heard advising them to stay put.

Sewol captain Lee Joon-Seok and three senior crew members are accused of “homicide through wilfull negligence” – a charge that can carry the death penalty.

Eleven other crew are being tried on lesser violations of maritime law.

The bulk of the charges against the crew arise from the fact that Lee and the others chose to abandon ship while hundreds of people were still trapped inside the heavily listing vessel before it capsized.

The final death toll was just over 300.

The crew were also condemned for ordering the passengers to remain where they were when the ship began listing.

A handful of crew members who stayed and tried to guide passengers to safety were among those who died.

Lee and his crew were publicly vilified in the wake of the tragedy, and there have been some expressions of concern about how fair their trial can be with emotions still running so high.

When the mobile phone footage of the students in the sinking ferry was shown in the Gwangju court two weeks ago, tearful relatives in the courtroom shouted abuse at the defendants and called for them to be executed. – Rappler.com