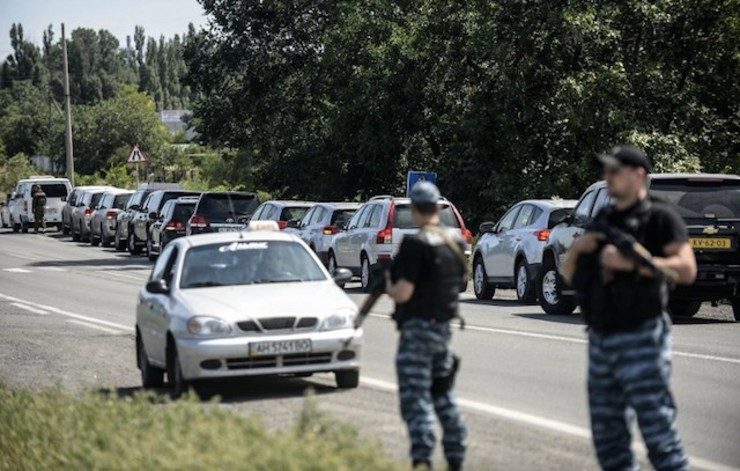 Facebook Twitter Copy URL
Copied
(UPDATED) The tougher sanctions are intended to be particularly painful for Russia, which is already flirting with recession as tensions over the crisis have hurt growth and sent investors fleeing

SHAKHTARSK/DONETSK, Ukraine (2nd UPDATE) – The EU is set to approve punishing sanctions against Russia Tuesday, July 29, over its role in the Ukraine crisis, after Kiev seized control of part of the MH17 crash site in fighting that blocked an international effort to recover victims’ remains.

Kiev said its troops had entered a string of towns around the scene of the July 17 Malaysian airliner disaster in eastern Ukraine, including Shakhtarsk which lies 10 kilometers (six miles) away.

The fighting and explosions forced an unarmed mission of Dutch and Australian police to turn back for the second day running before reaching the site, where the remains of some of the 298 victims still lie in the fields.

“It’s absolutely unconscionable that they remain out there,” said Michael Bociurkiw, a spokesman for monitors from the Organization for Security and Cooperation in Europe (OSCE) in rebel-held Donetsk.

A new attempt to reach the site and conduct a detailed examination was to be made on Tuesday.

Alexander Hug, the OSCE mission’s deputy head, said: “We have made it clear to everyone involved that tomorrow we absolutely have to have safe access.”

But Dutch investigators leading the probe said it was now likely that some remains may never be recovered.

“I believe the chances are not very good that we will get it all,” Dutch police chief Gerard Bouman told parliament in The Hague.

Data from the doomed plane’s black boxes analyzed as part of a Dutch-led probe showed that the crash was caused by shrapnel from a rocket explosion, Kiev said Monday, July 28.

The information from the flight recorders was decrypted in Britain after being handed over to Malaysian officials by pro-Russian rebels.

UN High Commissioner for Human Rights Navi Pillay on Monday condemned the downing of the Malaysian airliner as a possible war crime and demanded a “thorough, effective, independent and impartial investigation”.

“This violation of international law, given the prevailing circumstances, may amount to a war crime,” she said.

More than 1,100 people have been killed in the fighting that has engulfed eastern Ukraine over the past three months, the United Nations said, a toll that does not include the plane crash victims.

The Red Cross has said Ukraine is now in civil war – a classification that would make parties in the conflict liable to prosecution for war crimes.

Western powers, which have accused Moscow of fanning the rebellion by supplying it with weapons including the missile system allegedly used to shoot down MH17, urged new sanctions against Russia.

On Saturday, July 26, the EU hit another 15 individuals and 18 entities – including Russia’s intelligence chiefs – with “Phase 2” asset freezes and travel bans for their role in the crisis.

On Tuesday, member states are expected to take the next step, approving sanctions in four key areas: access to capital markets, defense, dual-use goods and sensitive technologies, including in the energy sector.

The tougher sanctions are intended to be particularly painful for Russia, which is already flirting with recession as tensions over the crisis have hurt growth and sent investors fleeing.

Rebel commander Igor Strelkov denied any role in the MH17 crash in his first press conference since the disaster, held inside the tightly guarded former state security service headquarters in Donetsk.

“I don’t know how the plane was downed, by what means. I only know that it was downed and that’s it. The only thing I can say is that my men did not down it,” said the commander, who was dressed in army fatigues.

“I did not have in my possession any BUK missile systems. Therefore I could not have given an order to shoot down the Malaysian Airlines plane,” he said.

An Agence France-Presse reporter on the outskirts of Shakhtarsk said artillery fire could be heard in the town and plumes of black smoke billowed into the sky, while a car drove away with the sign “children” written in red.

If Kiev manages to cement its latest gains, it could cut off access to Donetsk from Russia, which stands accused by the West of funneling arms to insurgents.

It is not clear which part of the crash site is now back under Kiev control.

“Things are fluid at the moment. Someone who has control of it now may not have control in a few hours,” the OSCE’s Bociurkiw said.

Andriy Lysenko, Ukraine’s military spokesman, claimed that troops were not carrying out any fighting but that “we would occupy (the crash site) once the rebels withdraw”.

Washington meanwhile released new photographs to bolster its claim that Russia was taking a direct role in the conflict by firing into Ukraine.

Russia also said that international monitors would visit its side of the volatile border over the next few days after accusing the United States of “hindering” their work on the ground.

Local authorities said three civilians were killed and five injured in Donetsk, a city of one million, which has been serving as a base for international monitors and journalists traveling to the crash site some 60 km (40 miles) away.

The military said it was also massing troops around key rebel base Gorlivka, 45 km north of Donetsk, “in preparation for liberating it”, a day after fighting there claimed 13 lives. – With Hui Min Neo in Kiev, Agence France-Presse/Rappler.com