Aug 2, 2014 12:14 PM PHT
Facebook Twitter Copy URL
Copied
WHO chief Margaret Chan describes the Ebola outbreak as 'by far the largest ever in the nearly four-decade history of this disease' 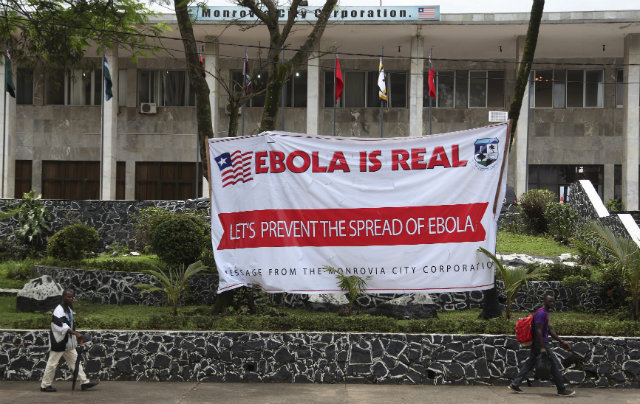 CONAKRY, Guinea – West Africa’s Ebola-hit nations have agreed to impose a cross-border isolation zone at the epicenter of the world’s worst-ever outbreak, amid warnings that the deadly epidemic is spiralling out of control.

The announcement came at an emergency summit in the Guinean capital on Friday, August 1, to discuss the outbreak, which has killed more than 700 people, with the World Health Organization warning Ebola could cause “catastrophic” loss of life and severe economic disruption if it continued to spread.

“We have agreed to take important and extraordinary actions at the inter-country level to focus on cross-border regions that have more than 70% of the epidemic,” said Hadja Saran Darab, the secretary-general of the Mano River Union bloc grouping the nations.

“These areas will be isolated by police and military. The people in these areas being isolated will be provided with material support,” she said at the meeting in Conakry.

Opening the summit, WHO chief Margaret Chan told leaders that the response of the three countries to the epidemic had been “woefully inadequate”, revealing that the outbreak was “moving faster than our efforts to control it”.

“If the situation continues to deteriorate, the consequences can be catastrophic in terms of lost lives but also severe socio-economic disruption and a high risk of spread to other countries,” Chan said.

She described the outbreak as “by far the largest ever in the nearly four-decade history of this disease”. (READ: Ebola: a ruthless killer)

“It is taking place in areas with fluid population movements over porous borders, and it has demonstrated its ability to spread via air travel, contrary to what has been seen in past outbreaks,” she told the summit.

“Cases are occurring in rural areas which are difficult to access, but also in densely populated capital cities. This meeting must mark a turning point in the outbreak response.”

The leaders of Sierra Leone, Liberia and Guinea used the summit to launch a $100 million (75 million euro) action plan that will see several hundred more medical staff deployed to battle the epidemic.

Darab did not outline the exact area to be part of the isolation zone, but the epicenter of the outbreak has a diameter of almost 300 kilometres (185 miles), spreading from Kenema in eastern Sierra Leone to Macenta in southern Guinea, and taking in most of Liberia’s extreme northern forests.

“The healthcare services in these zones will be strengthened for treatment, testing and contact tracing to be carried out effectively,” she said.

The meeting came after Dubai’s Emirates became the first global airline to announce it was suspending flights to the stricken area, while the United States, Germany, France and Italy have issued warnings against travel to the three African countries. (READ: W. African Ebola epidemic ‘likely to last months’ – UN)

US President Barack Obama announced on Friday that the United States would screen delegates travelling from Ebola-hit countries to Washington for a three-day Africa summit next week.

Two Americans infected with Ebola in West Africa will be evacuated back to the United States in the coming days to be cared for in strict isolation, US officials said.

Kent Brantly, a doctor who was treating Ebola patients in Liberia, and Christian missionary worker Nancy Writebol, were being flown home, but it was not immediately clear when they would arrive back in the US.

Meanwhile Nigeria quarantined two people who had “primary contact” with a man who died of Ebola in Lagos last week.

The WHO raised the death toll by 57 to 729 on Thursday, July 31, announcing that 122 new cases had been detected between Thursday and Sunday last week, July 24 to July 27 bringing the total to more than 1,300.

Liberian President Ellen Johnson Sirleaf warned ahead of the summit that the crisis was “nearing a catastrophe” and appealed for more doctors and supplies.

It has killed around two-thirds of those it has infected since its emergence in 1976, with two outbreaks registering fatality rates approaching 90%.

The death rate in the current outbreak is a lower-than-average 55%.

Fears that it could spread to other continents through air travel have been growing, with European and Asian countries on alert alongside African countries outside the Ebola crisis zone.

In Britain, Sierra Leone cyclist Moses Sesay was quarantined and tested for Ebola at the Commonwealth Games in Glasgow, before being given the all-clear, the athlete told a British newspaper.

Kenya, Ethiopia, Democratic Republic of Congo and Benin said they had enhanced screening at border points and airports.

Pan-African airlines Arik and ASKY have halted flights to and from Liberia and Sierra Leone, while Asia-Pacific nations from Hong Kong to Australia have announced tighter security measures at airports, some warning against travel to the Ebola-hit countries. – Rappler.com