Jun 6, 2012 11:14 AM PHT
Agence France-Presse
Facebook Twitter Copy URL
Copied
Cheering crowds lined Queen Elizabeth II's route from the Houses of Parliament to Buckingham Palace, waving flags as she passed in a horse-drawn carriage on the last of four days of celebrations marking her 60th year on the throne A dramatic flypast capped four days of celebrations marking her 60th year on the throne as the crowd waved Union Jack flags at the monarch and her family, surrounding the palace in a sea of red, white and blue.

The 86-year-old monarch later said in a special television message shown across the nation and the Commonwealth that the jubilee had been a “humbling experience.”

“It has touched me deeply to see so many thousands of families, neighbors and friends celebrating together in such a happy atmosphere,” the queen said.

“I will continue to treasure and draw inspiration from the countless kindnesses shown to me in this country and throughout the Commonwealth,” she added. “Thank you all.”

But 90-year-old Prince Philip, the queen’s stalwart companion throughout her reign, was poignantly absent from the red-and-gold-draped balcony after he was taken to hospital with a bladder infection on Monday.

The couple’s youngest son Prince Edward told reporters after visiting Philip in hospital that his father was “getting better” but he will remain in hospital for several days.

The queen braved the rain with her heir Prince Charles and his wife Camilla as well as Prince Harry, Prince William and his wife Catherine to wave from the balcony.

“We were told by police that there were 1.5 million in and around The Mall area,” a spokeswoman for Buckingham Palace told AFP in reference to the packed avenue running from the palace to Trafalgar Square.

Minutes earlier, the royals had driven to the palace from the Houses of Parliament in horse-drawn carriages, again cheered by thousands — many of whom camped out overnight to get a glimpse of the queen.

Military bands and more than 100 mounted soldiers in traditional uniform accompanied the carriages in a classic display of British pageantry. Banners saying “Elizabeth the Great” were held above the crowd.

In Philip’s absence, Charles and Camilla joined the queen, who was dressed in a mint-green silk coat scattered with crystals, in the red and gold 1902 state landau. The outspoken prince will remain in hospital for several days and was “disappointed” to miss the celebrations, the palace said.

In Philip’s absence, heir to the throne Prince Charles joined the 86-year-old queen, who was dressed in a mint-green silk coat scattered with crystals, in the red and gold 1902 state landau along with his wife Camilla.

Prince Harry joined Prince William and his wife Catherine, who wore a beige lace dress by Alexander McQueen, as they smiled and waved from their own carriage.

The Mall, the wide avenue leading from Buckingham Palace to Trafalgar Square, was a sea of red, white and blue, crammed with tens of thousands of people hoping to catch a glimpse of the royals as they passed.

Jill Davies, a silver-haired executive researcher from Suffolk in eastern England, waved her Union Jack as the queen went past her at Downing Street, where the prime minister’s official residence is located.

“Prince Philip is poorly but he’s done his bit, bless him,” she told AFP. “It was fantastic. I was outside Downing Street so I saw it all. The queen was waving to the crowds.”

Charles had earlier taken his father’s place by the queen’s side at a special jubilee service at St Paul’s Cathedral attended by political leaders, foreign ambassadors and royals.

Leading the service beneath the imposing dome of the cathedral, Rowan Williams, the Archbishop of Canterbury and leader of the world’s Anglicans, paid tribute to Philip as well as the monarch.

“We are marking six decades of living proof that public service is possible and that it is a place where happiness can be found,” said Williams. 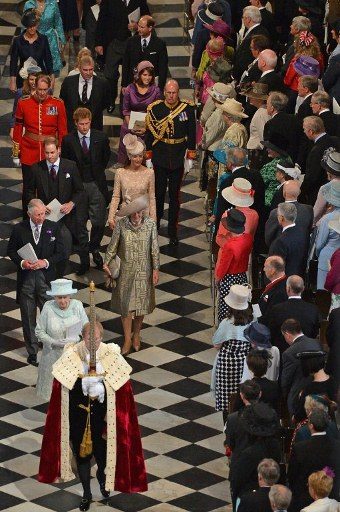 “In all her public engagements, the queen has shown a quality of joy in the happiness of others,” he added.

“The same, of course, can manifestly be said of Prince Philip, and our prayers and thoughts are very much with him this morning.”

US President Barack Obama also paid tribute to the queen on Tuesday, describing her as “a steadfast ally, loyal friend and tireless leader.”

“While many presidents have come and gone, your majesty’s reign has endured,” he said. “That makes your majesty both a living witness to the power of our alliance and a chief source of its resilience.”

The monarch insisted on attending Monday’s concert in front of the palace — which featured stars including Paul McCartney, Elton John and Stevie Wonder and was watched by hundreds of thousands of people — despite Philip’s ill health. After the final set, Prince Charles drew cheers from the crowds as he paid tribute to his “mummy”.

“The only sad thing about this evening is that my father cannot be here with us because unfortunately he’s been taken unwell,” he said.

Charles urged the crowd to show their support, and they responded by a raising a huge roar and chanting “Philip, Philip”.

Philip’s new health scare comes less than six months after he suffered chest pains during the Christmas break and was treated for a blocked coronary artery.

He appeared in good health on Sunday as he travelled on the royal barge in chilly conditions during a 1,000-boat river pageant, the centerpiece of the jubilee celebrations. – Robin Millard, Agence France-Presse