First Ebola case on US soil as doctor returns home

Aug 3, 2014 8:11 AM PHT
Agence France-Presse
Facebook Twitter Copy URL
Copied
The latest outbreak of Ebola in west Africa has killed 729 people of the more than 1,300 infected since March 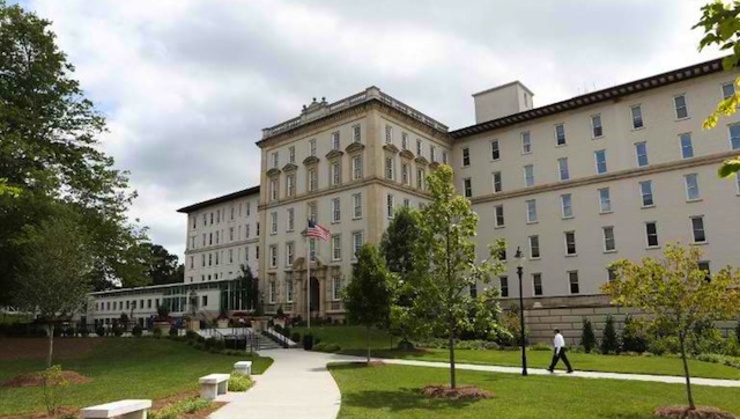 WASHINGTON, United States (UPDATED) – Doctors worked to save America’s first Ebola virus patient Saturday, August 2, after he arrived in the United States aboard a private air ambulance and was whisked to a state-of-the-art hospital isolation unit.

Onboard was stricken doctor Kent Brantly, one of two American aid workers infected with Ebola as they helped to battle an Ebola outbreak that has claimed more than 700 lives in West Africa since March.

The Gulfstream jet, equipped with a collapsible isolation chamber, landed at Dobbins Air Reserve Base outside Atlanta, Georgia just before 11:50 am (1550 GMT).

The jet pulled up at an aircraft hangar, where it was met by an ambulance and several vehicles, and the convoy then wound its way across Atlanta to Emory University Hospital.

Images showed three individuals wearing white bio-suits emerge from the ambulance, with one, apparently Brantly, led gingerly into the hospital.

His wife Amber Brantly asked for people to pray for his recovery and that of those stricken with the virus in Liberia.

“It was a relief to welcome Kent home today,” she said in a statement.

“I spoke with him, and he is glad to be back in the US. I am thankful to God for his safe transport and for giving him the strength to walk into the hospital.”

Christian missionary worker Nancy Writebol is expected to be airlifted back to the United States in the coming days by the same method as Brantly.

“We thank God that they are alive and now have access to the best care in the world,” said Franklin Graham, president of Samaritan’s Purse, the organization for which Brantly was working in West Africa.

The State Department, Centers for Disease Control and Prevention, National Institutes of Health, World Health Organization and Emory Hospital all helped in the effort.

Brantly and Writebol will be treated at Emory’s cutting-edge isolation unit, which has previously been used to care for individuals infected during the SARS epidemic that erupted in Asia in 2002-2003.

It is one of only 4 such facilities in the United States and is located near the CDC headquarters in Atlanta.

Brantly’s arrival marks the first time a patient infected with Ebola has been treated anywhere in the United States, triggering criticism in some quarters.

Business magnate and television personality Donald Trump argued that the patients should be barred from returning to US soil.

However Bruce Ribner, who oversees the isolation unit at Emory, dismissed the criticism.

“They have gone over on a humanitarian mission (and) they have become infected giving medical care,” said Ribner.

“We owe them the right to receive the best medical care that is available.”

The US State Department said the “safety and security of US citizens” remained the paramount concern.

“Every precaution is being taken to move the patients safely and securely, to provide critical care en route on a noncommercial aircraft, and to maintain strict isolation upon arrival,” a State Department deputy spokeswoman Marie Harf said.

Emory Healthcare said the establishment was “privileged” to be treating the infected individuals.

“Emory University Hospital physicians, nurses and staff can treat them safely and effectively, and we are honored to have the privilege of caring for these patients who contracted Ebola while serving on a humanitarian mission,” a statement said.

“These two Americans want to come back home and be treated here, and we are committed to helping them.”

The hospital said Brantly and Writebol would be the only patients housed in the isolation unit.

“This is not because of concerns of exposure, but, rather, for privacy matters considering the high-profile nature of these patients,” it explained.

The latest outbreak of Ebola in West Africa has killed 729 people of the more than 1,300 infected since March. (READ: Timeline: Ebola, a ruthless killer)

The World Health Organization has said the fast-moving outbreak was causing “catastrophic” loss of life in the affected countries of Guinea, Liberia, Nigeria and Sierra Leone. (READ: Ebola ‘moving faster than efforts to control it’: WHO)

It has killed around two thirds of those it has infected since its emergence in 1976, with two outbreaks registering fatality rates approaching 90%. – Rappler.com