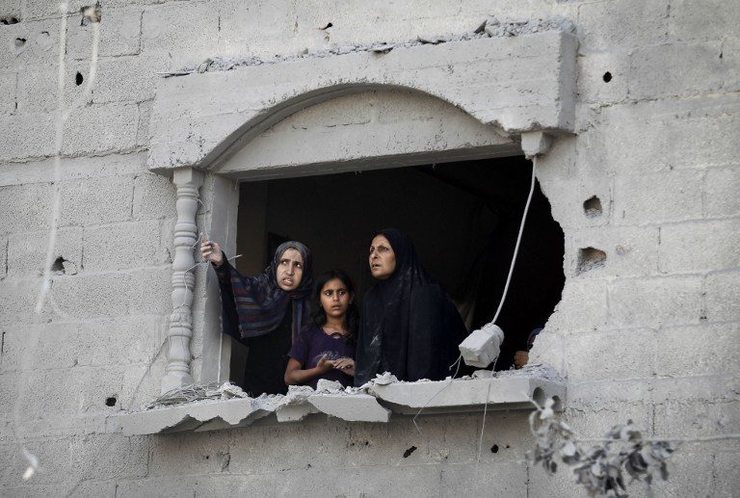 Facebook Twitter Copy URL
Copied
(UPDATED) Meanwhile, at least 10 people die in a fresh strike on a UN school in Gaza shortly after Israel confirmed it had begun withdrawing some troops from the war-torn enclave

GAZA CITY (UPDATED) – At least 10 people died in a fresh strike on a United Nations (UN) school in Gaza Sunday, August 3, shortly after Israel confirmed it had begun withdrawing some troops from the war-torn enclave.

The strike on the school sheltering displaced Palestinians in the southern city of Rafah came as Israel pounded the region following the suspected capture of a soldier by militants, who was later declared dead.

It was the third time in 10 days that a UN school had been hit and came 4 days after Israeli tank shells slammed into a school in the northern town of Jabaliya, killing 16 in an attack furiously denounced by UN chief Ban Ki-moon as “reprehensible.”

An Agence France-Presse correspondent said there were scenes of chaos at the site, with rescuers trying to evacuate the wounded any way they could, while adults were seen sprinting frantically away through pools of blood, young children clutched in their arms.

Chris Gunness, spokesman for the UN agency for Palestinian refugees (UNRWA), said the school had been housing thousands of internally displaced people (IDPs) who had been forced to flee their homes by the ongoing violence in Gaza.

Regional efforts to broker a diplomatic end to the fighting between Israel and Hamas have so far proved elusive, with their confrontation in Gaza now in its 27th day with more than 1,700 people killed.

A Palestinian delegation was to hold truce talks Sunday in Cairo with senior US and Egyptian officials, but Israel has said it sees no point in sending its negotiators to the meeting, citing what it says are Hamas breaches of previous agreed truces.

Islamic Jihad was also expected to join along with US Middle East envoy Frank Lowenstein.

Several Israeli newspapers reported that cabinet ministers have taken a decision not to seek a further negotiated ceasefire agreement with Hamas and were considering ending the military operation unilaterally.

Israel’s army announced on Sunday it had begun withdrawing some troops from Gaza with a military spokesman saying the ground operation was “changing gear.”

“We are removing some (forces),” Lieutenant Colonel Peter Lerner told AFP, saying troops were “extremely close” to completing a mission to destroy a network of attack tunnels.

“We are redeploying within the Gaza Strip, taking out other positions, and relieving other forces from within, so it won’t be the same type of ground operation,” he said.

“But indeed we will continue to operate … (and) have a rapid reaction force on the ground that can engage Hamas if required.

Israel’s assault on the southern city of Rafah began early on Friday in the opening hours of a 72-hour humanitarian truce, which was quickly shattered when militants ambushed a group of soldiers, killing two of them.

A third was reported missing, believed snatched in a development that drew sharp condemnation from top US and UN officials.

But early on Sunday, the Israeli army formally announced the death the soldier, 23-year-old Hadar Goldin, saying he had been “killed in battle in the Gaza Strip on Friday.”

Army radio said no body had been recovered, rendering the decision to announce his death “very delicate.” There was no word on the whereabouts of his remains.

Hamas’s Ezzedine al-Qassam Brigades acknowledged its militants had staged an ambush in which two other Israeli soldiers were killed, but denied holding Goldin.

His death raised to 64 the total number of soldiers killed since the start of the operation to July 8, its heaviest toll since the Lebanon war of 2006.

Nonetheless, Israeli Prime Minister Benjamin Netanyahu vowed to press on with the operation, promising that Hamas would pay “an insufferable price” for continued cross-border rocket fire.

“We will take as much time as necessary, and will exert as much force as needed,” he said late on Saturday, saying troops would complete their mission to destroy the tunnels after which the next security objectives would be decided.

His remarks came after the army gave a first indication it was ending operations in parts of Gaza, informing residents of Beit Lahiya and Al-Atatra in the north that it was “safe” to return home.

Witnesses in the north confirmed seeing troops leaving the area as others were seen pulling out of villages east of Khan Yunis in the south as commentators suggested it was the start of a unilateral withdrawal.  – Rap.compler