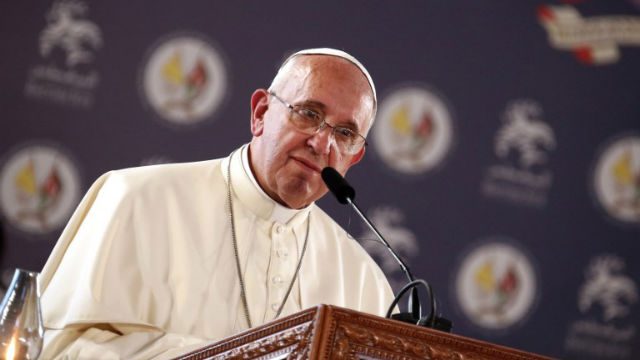 Facebook Twitter Copy URL
Copied
The 77-year-old pontiff "calls on the international community to protect all those affected or threatened by the violence, and to guarantee all necessary help" to refugees

A statement delivered by his spokesman said the pope joined the urgent appeals for peace from bishops in the Middle East and called on the international community to “ensure the necessary help” reaches people fleeing fighters from the Islamic State (IS) extremist group.

The 77-year-old pontiff “calls on the international community to protect all those affected or threatened by the violence, and to guarantee all necessary help” to those forced to flee their homes, “whose fate depends entirely on the solidarity of others.”

“The Holy Father renews his spiritual closeness to all those who are suffering through this painful trial, and makes the impassioned appeals of the local bishops his own,” the statement said.

It repeated an earlier appeal for peace made by Francis from Saint Peter’s Square in mid-July in which he warned that “violence is not conquered with violence.”

Chaldean Patriarch Louis Sako told AFP in an interview on Thursday that religious persecution was worsening in Iraq, saying jihadists who took over large areas of of the north have forced 100,000 Christians to flee and occupied churches, removing crosses and destroying manuscripts.

The IS group, which swept across much of Iraq’s Sunni heartland two months ago, has attacked several towns and villages including Qaraqosh, Iraq’s largest Christian town with a population of around 50,000. – Rappler.com