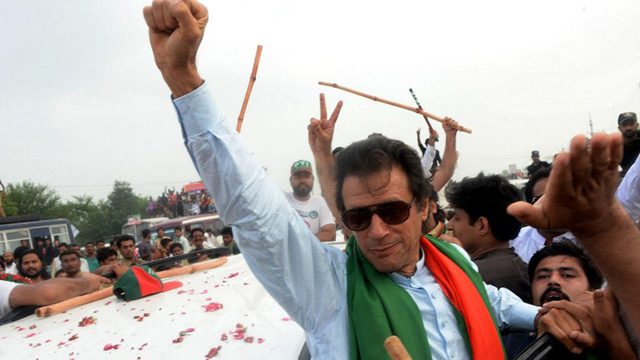 ISLAMABAD, Pakistan – Pakistani opposition politician Imran Khan’s party announced Monday, August 18, it is to renounce all its parliamentary seats, in a bitter row with the government over alleged poll rigging.

The dramatic mass resignation came as the government attempted to launch formal talks with Khan and populist cleric Tahir-ul-Qadri, who have led days of parallel protests calling for fresh elections.

Khan told protesters he would lead a march on Islamabad’s high-security “Red Zone” – where many top government buildings and foreign embassies are located – on Tuesday, August 19.

“I will lead the march on the Red Zone and my workers will follow me,” he told supporters still rallying in the capital late Monday.

He said the party was still making a decision about what to do in northwestern Khyber-Pakhtunkhwa province, where they are in power.

The PTI MPs’ resignations must be submitted to the national assembly speaker and passed on to the election commission, before their seats go to by-elections. Qureshi did not say when this would happen.

PTI scored their best-ever performance in last year’s election, which Sharif won in a landslide victory and was rated as free and credible by international observers.

Meanwhile, Qadri told supporters he would hold a “people’s parliament” session at the sit-in protest site on Tuesday.

“I invite people from across the country to come and attend the session,” he said in an address early Tuesday, adding that whatever decisions the “people’s parliament” took would be fully implemented.

Khan and Qadri on Saturday, August 16, led thousands of supporters on a “long march” to the capital from the eastern city of Lahore, hoping to mobilize a mass movement to oust Sharif.

But Khan’s protest failed to attract the vast crowds he had promised and other opposition parties on Monday shunned his call for a campaign of “civil disobedience”, leaving him looking increasingly isolated.

Before PTI’s unexpected, high-stakes resignation gamble, other opposition parties had distanced themselves from Khan’s call for people to stop paying taxes and utility bills in protest at the government.

“Democracy and nation will not be served by calls for civil disobedience nor by a stubborn refusal by any side to engage in a meaningful dialogue on political issues,” Zardari said in a statement.

Authorities had deployed tens of thousands of security personnel on Islamabad’s streets and blocked main roads to contain the protests, but by Monday their numbers had ebbed and life was returning to normal.

There was more condemnation for Khan’s civil disobedience call from the business community. The Federation of Pakistan Chambers of Commerce and Industry said the focus should be on getting the shaky economy back on track.

A stinging editorial from Dawn, Pakistan’s oldest English-language newspaper, said Khan had “miscalculated disastrously and painted himself and his party into a corner”.

The nuclear-armed country has experienced three military coups and the latest crisis has triggered more speculation about possible intervention by the powerful armed forces.

But sources said back-channel talks to resolve the row were underway on Monday and the government said it would soon announce cross-party committees to hold formal talks with PTI and Qadri.

Memon said the government wanted a negotiated end to the standoff but there was no question of Sharif resigning.

Qadri, a dual Pakistani-Canadian national, rejected the idea of talks with the government.

He has called for the arrest of Sharif over what he alleges was the murder of his supporters.

Ten workers from Qadri’s Pakistan Awami Tehreek movement were killed in clashes with police at his headquarters in Lahore on June 17. A judicial commission was formed to investigate. – Rappler.com