Aug 20, 2014 6:47 AM PHT
Agence France-Presse
Facebook Twitter Copy URL
Copied
(UPDATED) As calls mount for Washington to expand its military intervention against the jihadist group, ISIS threatens to kill another US reporter if bombings did not stop 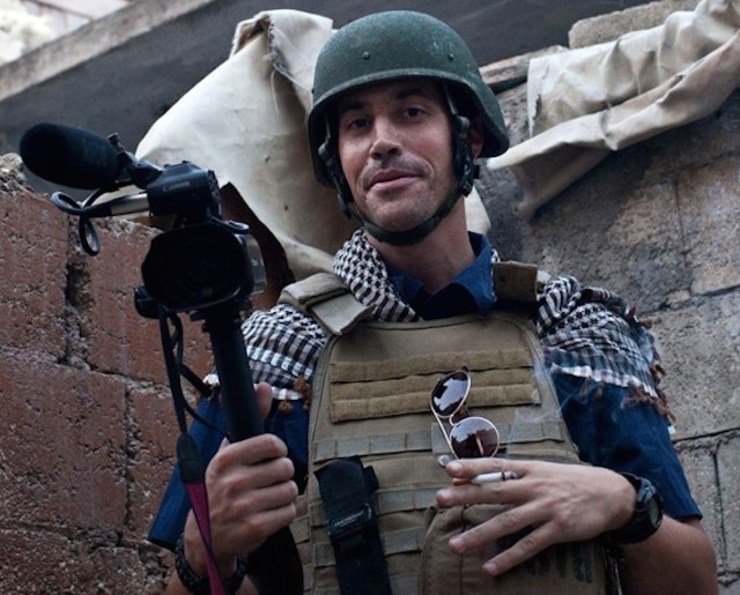 BAGHDAD, Iraq (3rd UPDATE) – Jihadists released a video apparently showing the beheading of an American journalist kidnapped in Syria, in the most direct retaliation yet to nearly two weeks of US air strikes on Iraq.

As calls mounted for Washington to expand its military intervention against the group, the Islamic State of Iraq and Syria (ISIS) threatened to kill another US reporter if bombings did not stop.

The video posted on the Internet Tuesday, August 19, showed a masked militant beheading a man resembling James Foley, who has been missing since he was seized in Syria in November 2012.

“We have never been prouder of our son Jim. He gave his life trying to expose the world to the suffering of the Syrian people,” Foley’s mother Diane said in a Facebook message to supporters.

“We implore the kidnappers to spare the lives of the remaining hostages. Like Jim, they are innocents. They have no control over American government policy in Iraq, Syria or anywhere in the world.”

The White House said US intelligence was studying the video, and that President Barack Obama had been briefed on it as he flew from Washington to resume his vacation on Martha’s Vineyard.

“If genuine, we are appalled by the brutal murder of an innocent American journalist and we express our deepest condolences to his family and friends,” National Security Council spokeswoman Caitlin Hayden said.

Foley was an experienced correspondent who had covered the war in Libya before heading to Syria to follow the revolt against Bashar al-Assad’s regime, contributing to news site GlobalPost, Agence France-Presse, and other media outlets.

Agence France-Presse chairman Emmanuel Hoog described Foley “as a brave, independent and impartial journalist” whose work in Syria and other war zones was “widely admired”.

According to witnesses, Foley was seized in the northern Syrian province of Idlib on November 22, 2012.

In the nearly five-minute video, titled “A Message to America” and distributed online by known Islamic State sources, the group declares that Foley was killed because Obama ordered air strikes against ISIS in northern Iraq.

The execution is carried out in an open desert area with no immediate signs as to whether it is in Iraq or Syria by a black-clad masked militant who speaks English with a British accent.

Foley is seen kneeling on the ground, dressed in an orange outfit that resembles those worn by prisoners held at the US naval base at Guantanamo Bay.

He threatens to kill another man shown in the video and said to be Steven Sotloff, whose kidnapping in August 2013 has not been widely reported.

He has written for several US newspapers and magazines, including TIME, Foreign Policy and The Christian Science Monitor.

Now calling themselves as the Islamic State, the ISIS declared itself a caliphate – a successor state to historic Muslim empires – in June this year.

Formed by a mixture of Sunni insurgents who have fought US and Shiite-led government forces in Iraq and anti-regime rebels in Syria, it has attracted recruits from around the world.

In recent weeks it has laid claim to a wide swathe of eastern Syria and northern Iraq, seizing the major Iraqi city of Mosul and then advancing south towards Baghdad and north against Kurdish forces.

Earlier this month, Obama reacted by ordering US warplanes to strike the jihadists, arguing they threatened US personnel in the Kurdish regional capital Arbil and risked carrying out a genocide against religious minority groups.

News of Foley’s apparent execution comes as US air strikes appeared to yield some results, helping Kurdish and federal forces push IS fighters back from some recently-conquered areas in northern Iraq, including the strategic Mosul dam.

Obama has insisted the scope of the strikes would remain limited but Iraqi officials and observers have argued only foreign intervention could turn the tide on jihadist expansion in Iraq.

Shiite militia, federal soldiers, Kurdish troops and Sunni Arab tribes have been battling IS for weeks in some areas but have been unable to clinch a decisive victory.

An offensive launched on Tuesday against Saddam Hussein’s hometown Tikrit and presented as a major push to liberate the city appeared to have stalled a few hours later, with no significant results.

US and Iraqi officials say the strikes have already had an impact on IS morale but the intervention may also have galvanized some fighters as fighting Americans is a source of prestige in global jihad.

Before releasing the video on Foley, IS sympathizers in social media appeared to shift their focus away from their Iraqi foes to vow all-out war on the United States. – Rappler.com