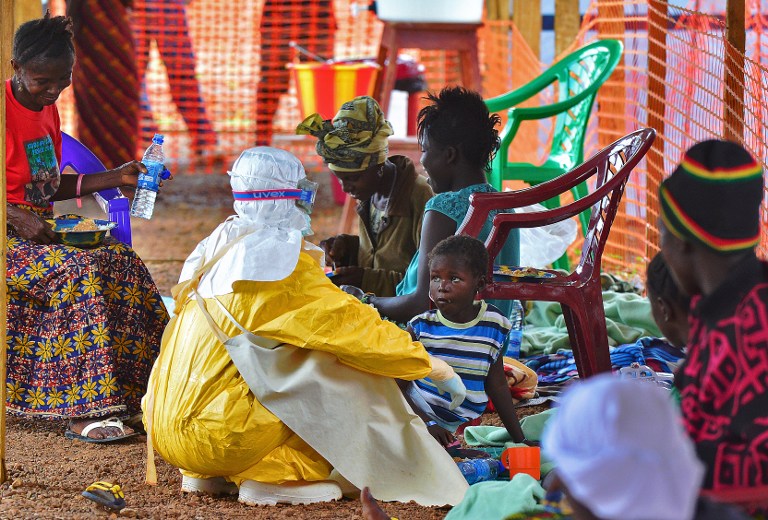 FREETOWN, Sierra Leone (2nd UPDATE) – The UN’s World Health Organization on Sunday, August 24, announced a first Ebola infection among the health experts it has dispatched to battle the raging epidemic in West Africa that has killed at least 1,427 people with few signs of abating.

Also on Sunday, Britain’s first Ebola patient, a male nurse who also contracted the disease in Sierra Leone, was evacuated to London, and the Democratic Republic of Congo confirmed its two first cases of Ebola this year, but claimed they were unrelated to the epidemic in West Africa.

The sobering news of Ebola’s spread came as UN officials pledged to step up efforts against the lethal tropical virus, which has infected more than 2,600 and killed 1,427, according to figures released Friday.

In Kinshasa, Congolese Health Minister Felix Kabange Numbi said that two of eight samples taken from victims of a mystery fever had tested positive for Ebola.

“The results are positive. The Ebola virus is confirmed in DRC,” Kabange told Agence France-Presse.

Speaking later on public television, he said the confirmation marked the 7th outbreak of Ebola in DR Congo, where the virus was first identified in 1976 near the Ebola River.

But he said the two new cases had “no link to [the epidemic] raging in West Africa” and were different strains from one another.

Authorities immediately imposed a quarantine around the affected area in Equateur province near Jera, more than 1,200 kilometers (750 miles) northeast of the Congolese capital Kinshasa.

Medical aid group Doctors Without Borders, said it was sending a crew to help handle patients in the area.

The UN’s World Health Organization gave no details of its infected expert but said the person was “receiving the best care possible”.

Still, the WHO said in a statement, it was considering the “option of medical evacuation”.

Meanwhile, an isolation ward in a London hospital had been readied for the country’s first Ebola patient.

Sierra Leone health ministry spokesman Yahya Tunis hailed the man, a volunteer nurse, as a “valuable member” of a team which worked with Ebola patients in Kenema, a hard-hit part of the east now under quarantine.

Sierra Leone, where 392 Ebola deaths have been recorded, is one of four West African states struggling to control the spread of the aggressively contagious virus, which can spread through bodily fluids including saliva and blood.

Liberia has been particularly hard hit since the outbreak began in March, with 624 deaths, compared with 406 for Guinea and five for Nigeria, according to a WHO count on Friday.

The death toll continues to mount despite quarantines of stricken districts, while neighboring states have shut their borders trying to keep illness out.

On Saturday, August 23, the UN Secretary-General Ban Ki-Moon’s special representative for Liberia, Karin Landgren, pledged the world body would take a “strong role” in coordinating the response to the emergency.

British physician David Nabarro, the UN’s point man on Ebola, during an ongoing tour of the affected region said the United Nations would “ensure resources are given to sectors that need it most”.

But the WHO has also warned that it could take “several months” to bring the epidemic under control.

But it also estimates its count of the infected and dead is likely far too low, due in part to community resistance to outside medical staff and a lack of access to infected areas.

In the Liberian capital Monrovia, workers said crematoriums were struggling to deal with dozens of bodies arriving every day.

No cure or vaccine is currently available for the deadly virus, meaning patients must be isolated.

The epidemic, which first erupted in the forests in the south of Guinea, is also taking its toll on the economies of some of the world’s poorest countries.

“It is a total catastrophe. We are losing lots of money,” Alhaji Bamogo, who sells clothes in the market in the Liberian capital Monrovia, told Agence France-Presse recently.

“All those who are coming to the market come only to buy food or products for the disinfection of Ebola,” he said.

Several international airlines have halted flights to west Africa in a move that Moody’s ratings agency warns “will exact an economic toll” on the region.

Steel giant ArcelorMittal said contractors at its iron ore works in Liberia had suspended operations and were pulling out staff.

And in quarantined areas in Sierra Leone and Liberia, cash crops like cocoa and coffee are being left to rot as farmers fear to stray from home.

Meanwhile the Ivory Coast has closed its borders with Guinea and Liberia, just days after Senegal did the same with Guinea.

And South Africa has banned entry for non-citizens arriving from Sierra Leone, Guinea and Liberia.

The measures taken against Ebola-afflicted countries, especially by neighbors, have caused friction in the region.

Ibrahim Ben Kargbo, the chairman of Sierra Leone’s presidential task force on Ebola, said he was “surprised” by the lack of solidarity among African countries.

It “gives the impression that we are pariah states,” Kargo said on state television. – Rappler.com