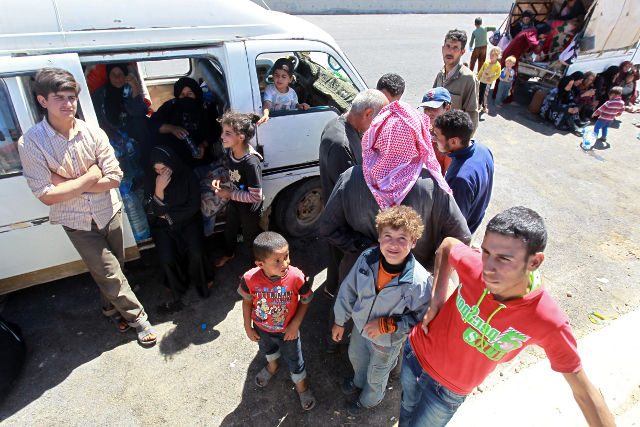 Facebook Twitter Copy URL
Copied
Less than a year ago, the number of registered Syrian refugees stood at two million, UNHCR said, pointing to reports of "increasingly horrifying conditions inside the country" to explain the surge.

GENEVA, Switzerland – More than 3 million Syrians have fled the civil war ravaging their country to become refugees – a million of them in the past year alone, the United Nations said Friday, August 29.

“Syria’s intensifying refugee crisis will today surpass a record 3 million people,” the UN’s refugee agency said in a statement, adding that the number did not include hundreds of thousands of others who fled without registering as refugees.

Less than a year ago, the number of registered Syrian refugees stood at two million, UNHCR said, pointing to reports of “increasingly horrifying conditions inside the country” to explain the surge.

It described “cities where populations are surrounded, people are going hungry and civilians are being targeted or indiscriminately killed.”

The increasingly fragmented conflict raging in Syria has claimed more than 191,000 lives since erupting in March 2011.

In addition to the refugees, the violence has also displaced 6.5 million people within the country, meaning that nearly 50 percent of all Syrians have been forced to flee their homes, UNHCR said.

Over half of all those who have been uprooted are children, it lamented.

Most of the Syrian refugees have found their way to neighbouring countries, with Lebanon hosting 1.14 million, Jordan 608,000 and Turkey 815,000.

The strain on the host countries’ economies, infrastructures and resources is “enormous”, UNHCR stressed, adding that nearly 40 percent of the refugees were living in sub-standard conditions.

The agency said its work to help the Syrian refugees now marked the largest operation in its 64-year-history.

“The Syrian crisis has become the biggest humanitarian emergency of our era, yet the world is failing to meet the needs of refugees and the countries hosting them,” UN refugee chief Antonio Guterres said in the statement.

“The response to the Syrian crisis has been generous, but the bitter truth is that it falls far short of what’s needed,” he added.

Donors have handed over more than $4.1 billion to help those affected by the conflict, but UNHCR said another $2.0 billion was needed by the end of this year alone to meet the urgent needs of the refugees.

David Miliband, former British foreign secretary and the current head of the International Rescue Committee, was quick to react to the new refugee tally.

“The 3 million refugees from the Syria conflict represent 3 million indictments of government brutality, opposition violence and international failure,” he said in a statement.

“This appalling milestone needs to generate action as well as anger,” he said, also calling for “greatly increased efforts” to reduce the suffering of civilians left inside Syria.

UNHCR meanwhile decried that “increasing numbers of families are arriving (in neighbouring countries) in a shocking state, exhausted, scared and with their savings depleted.”

“Most have been on the run for a year or more, fleeing from village to village before taking the final decision to leave,” it added, pointing out that for most of the one in eight Syrians who have become refugees, crossing the border was a last resort.

More than half of those arriving in Lebanon had fled at least once before crossing the border, while one in 10 had fled more than three times, UNHCR said, adding that one woman claimed to have moved no fewer than 20 times before crossing into Lebanon.

Meanwhile there are worrying signs that the journey out of Syria is becoming more difficult, the agency said.

The agency also voiced deep concern for several hundred Syrians trapped inside the remote al Obaidi refugee camp in Iraq after UN agencies and other groups were forced to abandon their offices and warehouses as the region became overrun by Islamic State jihadists.

“National partners are continuing to provide supplies and maintenance, but the situation is volatile,” it said. – Rappler.com