Jun 11, 2012 3:27 PM PHT
Agence France-Presse
Facebook Twitter Copy URL
Copied
Aung San Suu Kyi takes the latest stride in her journey from an imprisoned activist to a politician on the world stage when she visits Europe this week to give a Nobel speech two decades in the making 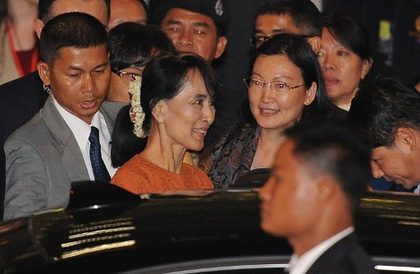 YANGON, Myanmar (AFP) – Aung San Suu Kyi takes the latest stride in her journey from an imprisoned activist to a politician on the world stage when she visits Europe this week to give a Nobel speech two decades in the making.

The Myanmar democracy icon, who was under house arrest when she was awarded the 1991 Nobel Peace Prize, will leave Wednesday for Switzerland, Norway, Ireland, Britain and France on only her second overseas foray in 24 years.

For more than two decades Suu Kyi did not dare leave Myanmar — even to see her sons or British husband before his death from cancer in 1999 — fearing the generals who ruled the country would not let her return.

As well as the Nobel speech, she will speak at an International Labor Organization conference, address Britain’s parliament and receive an Amnesty International human rights award in Dublin from rock star Bono.

Her visit will mark a new milestone in the political changes that have swept through the country formerly known as Burma since decades of outright military rule ended last year, bringing to power a new quasi-civilian government.

President Thein Sein is credited for a series of dramatic changes including releasing hundreds of political prisoners, signing peace pacts with armed rebel groups and welcoming Suu Kyi’s party back into mainstream politics.

The former general now faces a major challenge at home from a wave of sectarian violence in western Rakhine state, where a state of emergency has been imposed in response to violent clashes between Buddhists and Muslims.

Suu Kyi, the daughter of Myanmar’s independence hero General Aung San, for her part has called for “sympathy” with minorities in the wake of the unrest.

In April the veteran activist won her first ever seat in parliament, prompting Western nations to start rolling back sanctions.

Suu Kyi will deliver a hugely symbolic lecture on June 16 in Oslo to accept the Nobel Prize, which thrust her onto the global stage and spurred decades of support for her party’s democratic struggle against authoritarian rule.

But the opposition leader may also inject a note of caution: on her first overseas trip in more than two decades, Suu Kyi this month warned world business leaders at a meeting in Bangkok against “reckless optimism” over the democratic reforms.

“She will want audiences in Europe to appreciate that the hard work of political reform and economic transformation has only just begun,” said Nicholas Farrelly, a research fellow at Australian National University.

The visit, which is scheduled to last until the end of June, will also allow Suu Kyi to burnish her credentials as an international figure after spending most of the last 22 years locked up in her Yangon lakeside villa.

“She could be the next leader of Myanmar, so she will want to reflect that profile,” said Pavin Chachavalpongpun, Southeast Asia expert at Kyoto University in Japan.

Suu Kyi, who is traveling with rising stars from her National League for Democracy (NLD) party, rather than the elderly senior members, known as the “uncles”, can expect a rapturous reception in Europe’s capitals.

“For decades it’s been an easy issue for the West… Suu Kyi is the good guy resisting the evil generals. There’s been a huge amount of support for her principled stand,” said Gareth Price, an Asia expert at the Chatham House think-tank in London.

“But now things are changing. It is becoming more complex.”

One challenge for Suu Kyi — and her foreign hosts — is to avoid upsetting Myanmar’s reform-minded government, which still has close links to the military, as she is rumored to have done by her recent visit to Thailand.

“The difficult question for her and the international community is how to encourage a bunch of people (regime figures) into doing themselves out of jobs by continuing the reform process,” Price added.

“Anything that detracts from that will be seen as a misjudgment.”

There is also a strong personal dimension to the tour.

Suu Kyi will join a “family reunion” in Britain, according to her party.

It has declined to say whether that will include seeing both her sons, Kim and Alexander Aris, as well as her grandchildren.

But her security chief Khun Thar Myint told AFP: “I don’t want to disturb the reunion of family members who have been living apart for many years.”

While Kim has visited his mother in Myanmar since her release, Alexander has not and he now lives in the United States. Suu Kyi will also spend her 67th birthday somewhere in Europe on June 19.

She will also address both houses of Britain’s parliament on June 21 — a rare honour bestowed on few foreign dignitaries — and accept an honorary doctorate at Oxford where she studied and then later lived with her family before returning to Myanmar in 1988. – Shwe Yinn Mar Oo, Agence France-Presse