Sep 5, 2014 9:07 PM PHT
Hindra L
Facebook Twitter Copy URL
Copied
Beyond the debate over whether interfaith marriages should be legally recognized or not, the question of whether marriage should be dependent on religion is asked. 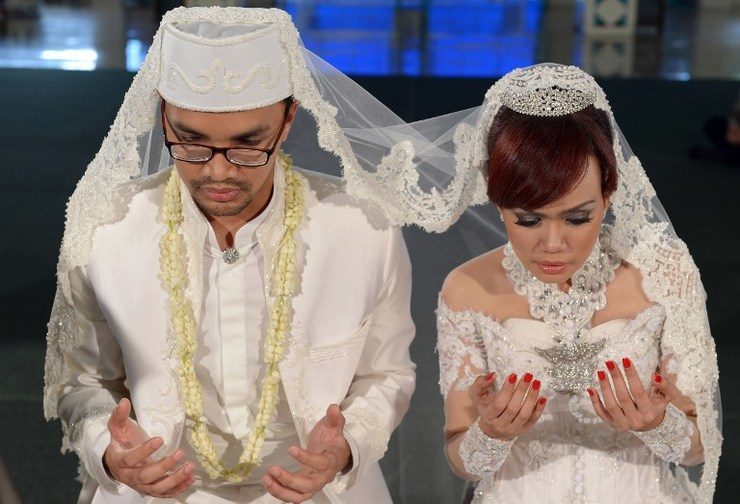 JAKARTA, Indonesia – The long-running debate on interfaith marriages in Indonesia resurfaced again this week, after a group of law students and alumni from the University of Indonesia sought to have an article in the country’s 40-year-old marriage law be declared unconstitutional.

The debate revolves around Article 2, Paragraph 1 of the 1974 Marriage Law, which states that “a marriage is valid if entered into in accordance with the applicable laws of each party’s religion and beliefs”.

While it doesn’t specifically rule out interfaith marriages, it is largely interpreted that way since civil weddings don’t exist in Indonesia and couples have to get married under one of the country’s 6 officially recognized religions – Islam, Protestantism, Catholicism, Hinduism, Buddhism and Confucianism.

What do religious leaders say?

The Indonesian Ulema Council (MUI), the country’s highest authority on Islam – the religion of 88% of Indonesians – says the Koran forbids interfaith marriages. “This can not be negotiated,” MUI member Anwar Ibrahim said on Friday, September 5, in response to the petition in court.

Other Muslim groups, however, interpret the Koran differently and find no issue with interfaith marriages. “Muslims have different interpretations of the Koran, including of the chapter that talks about marriage,” Zainun Kamal from the Paramadina Foundation, a religious and social institution founded in 1986 by late Islamic scholar Nurcholish Madjid, told the Jakarta Globe in 2010.

On the other hand, the Indonesian Bishops Conference (KWI) said that, principally, the Catholic Church can’t forbid interfaith marriages.

“The churches can only appeal for people to avoid interfaith marriages. There are things to be considered,” Fr. Hibertus Hartono MSF said, citing issues such as family approval, which religion their children would follow, and more.

However, he said the church is aware that it is a human right for people to hold any belief. He also said that love should transcend religion.

“In the end, churches can’t force a non-Catholic partner to convert into Catholicism. At the same time, we ask Catholics who get married to non-Catholics to marry under Catholic rites,” he said.

In practice, it is difficult for interfaith couples to get married in Indonesia. Some manage to do so either through the use of fake IDs that show they have the same religion, or with the help of religious organizations sympathetic to the cause. When all else fails, one of the partners would have to convert, or the couple can choose to get married abroad.

“The interpretation (of the marriage law) has created a legal uncertainty,” Anbar Jayadi, one of the petitioners, told the Constitutional Court during the preliminary hearing for their suit on Thursday, September 4, as quoted by Kompas.com.

Anbar argued that the article in question contradicts the constitutional provisions on equality before the law, the right to have a family and bear children through a legitimate marriage, and the right to worship according to their respective beliefs.

But beyond the debate of whether interfaith marriages should be legally recognized or not, Anbar argued that marriage should not depend on religion.

Instead, he said the government should guarantee the citizens’ right to marry regardless of religion, and he found an ally in Indonesia’s Human Rights Commission (Komnas HAM).

“From the perspective of human rights, every citizen has a right to build a family and have children,” Komnas HAM chairwoman Siti Noor Laila said, as quoted by Kompas.com.

However, Religious Affairs Minister Lukman Hakim Saifuddin said that while Indonesia was not an Islamic state, it was also not a secular state that does not recognize religious values.

“Indonesians are very religious. They uphold religious values. In any country, marriage is something sacred. Marriage can’t be separated from religious values,” he was quoted as saying.

The Constitutional Court, however, told Anbar to further refine their petition, so it appears the debate may not end anytime soon. – Rappler.com