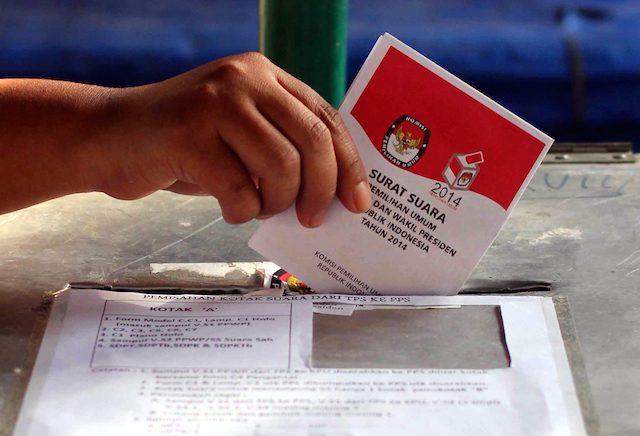 JAKARTA, Indonesia – After losing in the July 9 presidential elections, as well as in subsequent attempts to challenge its results, Prabowo Subianto and his allies have taken the battle to the legislature. This time, it’s not the presidency at stake, but the right of Indonesians to directly elect their governors, mayors and district heads.

A committee in the outgoing House of Representatives (DPR) – which will end its term on September 30 – is currently deliberating a Regional Elections Bill (RUU Pilkada) that seeks to have these regional executive leaders be chosen by the local legislature (DPRD). This was the way it used to be, until post-Suharto era reforms led to Indonesians being able to directly vote for them for the first time in 2005.

The controversial bill’s proponents tout the budget savings that could be made if Indonesia does away with the costly direct elections, which are held separately by each province. They also say indirect elections through the DPRD reduces the likelihood of election-related violence and “money politics”. Those against it – more than 80% of Indonesians according to a recent survey by the Indonesian Survey Circle – decry the threat to democracy and point out it’s unlikely “money politics” would actually decline.

But arguments on the merits of either system aside, the issue here, really, is politics.

“This is a political game,” R. Siti Zuhro, a political analyst at the Indonesian Institute of Sciences (LIPI), explains. “This competition is a continuation of the presidential election.” 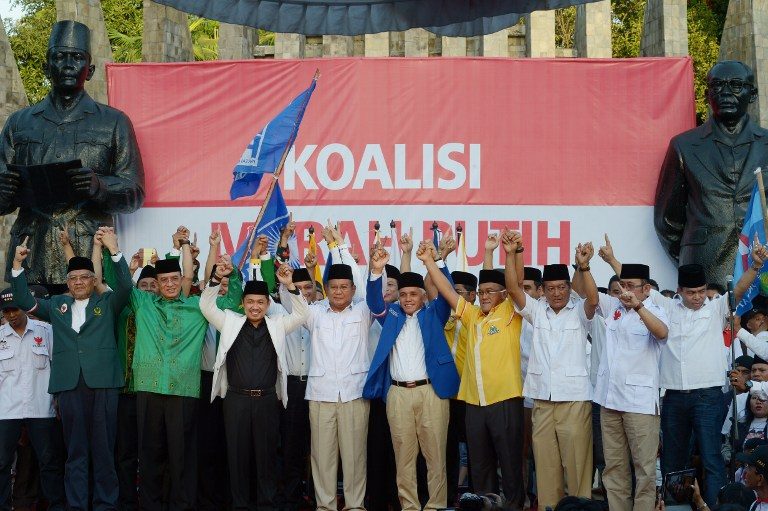 Pushing for the bill on the red and white corner of the legislature are Prabowo and the 6 political parties that supported his failed bid for the presidency. The Red and White Coalition consists of Gerindra (Prabowo’s party), the Suharto-era political vehicle Golkar (which is still led by tycoon Aburizal Bakrie), losing vice presidential candidate Hatta Rajasa’s National Mandate Party (PAN), and the graft-tainted ruling Democratic Party and Islamic parties United Development Party (PPP) and Prosperous Justice Party (PKS).

On the minority side stands President-elect Joko “Jokowi” Widodo’s party, the Indonesian Democratic Party of Struggle (PDI-P), and the two smaller parties that supported him during the election, Hanura and National Awakening Party (PKB).

The bill was first proposed by the Ministry of Home Affairs in 2010, but it has found no strong political support over the past 4 years. About two weeks ago, however, members of the Red and White Coalition – which control 63% of the legislature – began expressing support for it.

“This is their revenge for Jokowi winning, because he’s the product of direct elections,” University of Indonesia political analyst Arbi Sanit says.

Another way of looking at it, Siti adds, is that these political parties allied with Prabowo are trying to find a way to still play an important role over the next 5 years. That can either be in the legislature as part of the majority opposition or with Jokowi’s government, whose term begins on October 20. (READ: Prabowo’s coalition moves to control legislature)

The ‘problem’ with Jokowi

The problem is that Jokowi – who has maintained he would not trade ministerial seats for political support – and PDI-P are not giving them enough political reasons to change alliances. PDI-P and its chairwoman, former President Megawati Sukarnoputri, have no history of being flexible or good at negotiating, explains political analyst and academic Dodi Ambardi. “This was seen in 1999 (when Megawati backed out of a coalition with PAN and PKB). And today she’s still the head of PDI-P, so she’s not changing the way she handles party politics, she’s not sharing power,” he says.

“Jokowi, at the same time, promises to do the same thing. He wants to have a lean cabinet, and doesn’t want to share power with an oversized coalition.”

Most political parties came knocking on PDI-P’s door before the election, but they went away and ended up siding with Prabowo.

Even Vice President-elect Jusuf Kalla, who was seen to be the seasoned political hand who would help Jokowi on the negotiating table, has so far been ineffective in this regard because he has no bargaining chips to offer, Dodi says.

“If Jokowi shares political spoils, Merah Putih (Red and White) will fall apart. But he isn’t,” he adds.

They’re doing this – pushing for the controversial RUU Pilkada – to force Jokowi and Megawati to think about negotiating, he adds.

So which is the lesser evil? For Jokowi to “share political spoils” or to risk allowing this bill to pass?

Tempo newspaper looked at the party representation in the DPRDs of Indonesia’s 33 provinces and found that 31 of them were controlled by the Red and White coalition.

If the bill is passed, therefore, Prabowo and his allies would not only reinforce their control over the House of Representatives – and likely block Jokowi’s programs over the next 5 years – but also wield executive and legislative control over most of decentralized Indonesia.

Over the next two weeks to Sept. 25, the date the bill is expected to go to a vote in a plenary session, Indonesians will hold street protests and campaign online and offline against the bill, while politicians meet behind closed doors and negotiate the future of the country.

The missing factor so far here is President Susilo Bambang Yudhoyono, who has so far stayed mum on the issue despite calls for him to step in and withdraw the bill.

If the bill does go to a plenary vote, the glimmer of hope, analysts say, is that lawmakers may not all toe the party line.

“If closed voting is done during the plenary, there’s a chance of the bill being rejected,” Dodi says. “If it’s open voting, there will be pressure from party leaders and it’s more likely the bill will pass.” – Rappler.com