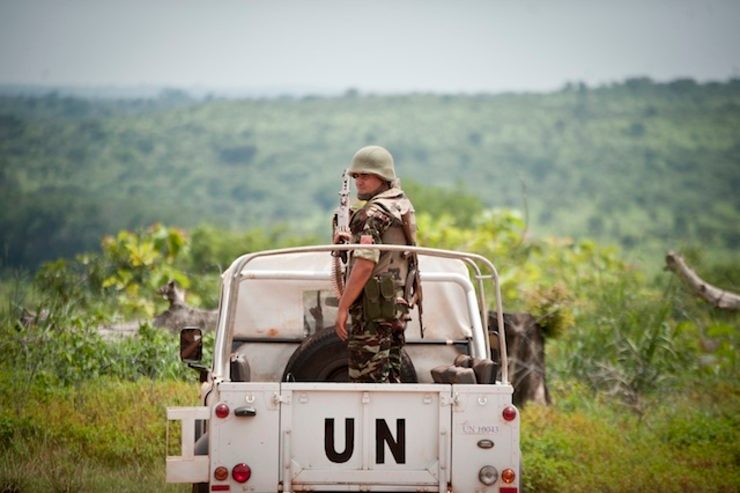 Facebook Twitter Copy URL
Copied
About 1,500 troops from Bangladesh, Pakistan, Indonesia and Morocco, among other nations, will join 4,800 African troops already on the ground who will be 're-hatted' to serve in the MINUSCA mission

UNITED NATIONS – A new UN peacekeeping mission gets off the ground next week in the Central African Republic, one of Africa’s most fragile states, despite questions over what peace there is to keep.

About 1,500 troops from Bangladesh, Pakistan, Indonesia and Morocco, among other nations, will join 4,800 African troops already on the ground who will be “re-hatted” to serve in the MINUSCA mission.

Senior UN officials and CAR’s President Catherine Samba-Panza are to attend a formal ceremony in Bangui on Monday, September 15, to launch the UN’s 9th mission in Africa and 16th worldwide.

The mission was set up in April, taking over from the African Union-led MISCA that was deployed alongside 2,000 French troops after a March 2013 coup plunged the country into bloodshed and chaos.

While some stability has returned to Bangui, fighting continues elsewhere in the country between mainly Muslim former Seleka rebels and Christian anti-Balaka militias, with deadly attacks an almost daily occurrence.

A ceasefire deal signed in July has yet to take hold, and the appointment of the country’s first Muslim prime minister has done little to put CAR back on track to reconciliation.

The violence has wiped out what little state authority was being wielded from Bangui in one of Africa’s poorest countries. It ranks 185 out of 187 on the UN development index.

“The state has always been extremely weak but it has got to the point where ministers have an office and a building of sorts, maybe they have a personal assistant, maybe a computer, and that’s it,” said UN peacekeeping chief Herve Ladsous.

“There are no civil servants and no administration.”

Under a deal signed with the Bangui government, UN peacekeepers will be tasked with restoring law and order and given authority to make arrests. They also will ensure that prisons are guarded and courts are operating.

“We have to give citizens a feeling that the state is back,” said Ladsous.

To help rebuild central power, UN officials are also looking at ways to bring millions of dollars from diamond mines now in the hands of militias back to state coffers.

The mission is facing a mammoth logistical challenge in a country with appalling roads and a smattering of airstrips. Equipment trucked in from Douala, in nearby Cameroon, takes at least 10 days to reach Bangui.

The UN Security Council has called for 12,000 troops for the mission – almost double the current size – and Ladsous insists it will be up to full force by December.

There are also plans to deploy spy drones after the successes of the UN mission in the Democratic Republic of Congo in using the surveillance technology to watch over armed groups in remote areas.

The UN mission is being launched on the heels of a string of failed international operations in CAR, and experts are skeptical that this new endeavor will be the exception.

“In international circles, the CAR crisis has been passed around like a ‘hot potato’ from organization to organization,” said Thierry Vircoulon of the International Crisis Group.

“Far from intervening in support of a peace accord, the UN has yet to persuade the parties to sign on to one and is supporting a powerless transitional government,” said Vircoulon.

Attention needs to turn to regional players including Chad, which has taken in a large number of Muslim refugees, the Congo Republic and the Democratic Republic of Congo, which have been seeking to extend their influence through this conflict.

“The road will be long”, Senegalese General Babacar Gaye, the MINUSCA commander, told the Security Council last month. “The situation is worrisome.”

Samba-Panza, the former Bangui mayor now leading the country, is due to attend a special meeting at the United Nations in New York on September 26 to outline the way forward for her troubled nation. – Rappler.com