Sep 11, 2014 11:02 PM PHT
Facebook Twitter Copy URL
Copied
Scotland's September 18 referendum has put the wind in the sails of Catalans who want full sovereignty for their region in the northeast of Spain 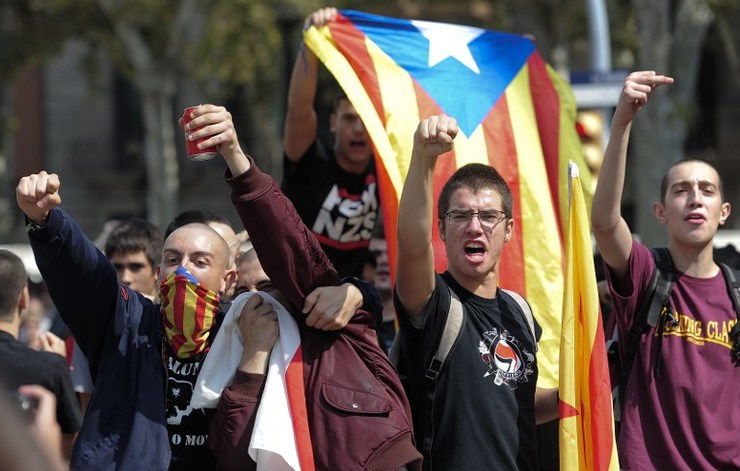 BARCELONA, Spain – Red and yellow flags filled the streets of Barcelona Thursday, September 11, as Catalan nationalists fired up by Scotland’s independence referendum rallied to demand a vote on breaking away from Spain.

Thousands of people wearing shirts striped with the Catalan colors, some of them also waving blue and white Scottish flags, massed in the sunshine at the start of a rally expected to draw half a million demonstrators.

Scotland’s September 18 referendum has put the wind in the sails of Catalans who want full sovereignty for their region in the northeast of Spain.

“Now is the time,” ran the slogan printed on T-shirts of demonstrators who gathered amid the wail of high-pitched Catalan “grallas” or oboes.

The Scottish vote is due just a week after the most sensitive day of the year for Catalonia: Thursday’s “Diada”, the annual commemoration that marks its defeat and absorption by Spain.

“If a nation such as Scotland can vote, why not Catalonia?” said the region’s president Artur Mas, who has defied Madrid by calling a vote on Catalan independence for November 9.

“If the Catalan population wants to vote on its future, it’s practically impossible to stop that forever,” he told Agence France-Presse in an interview on Wednesday, September 10.

Demonstrators planned to mass in the late afternoon along two central Barcelona avenues in the shape of a giant letter “V” for vote.

They will also set up 947 symbolic ballot boxes – one for each of Catalonia’s municipal districts.

Spain’s national government fiercely opposes any move towards independence for Catalonia. It has branded Mas’s planned vote illegal and vowed to block it.

Mas retorted on Wednesday: “It’s absurd to pretend that could be so and I think the Spanish government will have to realize that.”

Mas has vowed to pass a regional law that he says will allow him to push ahead with the “consultation” vote, but his efforts risk being thwarted by Spain’s Constitutional Court.

The Diada marks what many in the region see as the day they lost their autonomy: September 11, 1714, when Barcelona fell to Spanish and French forces in the War of the Spanish Succession.

Many of Catalonia’s 7.5 million inhabitants feel short-changed by the national government in Madrid, which redistributes their taxes.

They want full control of their region with its distinct Catalan language and culture.

“Our culture, our language and our traditions must be respected and we have seen that in this state that is impossible,” said Bernat Pi, a 24-year-old doctoral student waving a Catalan flag and a blue and white Scottish Saltire one.

Catalonia formally declared itself a “nation” in 2006 but Spain’s Constitutional Court later overruled that claim.

In 2012, Spain’s Prime Minister Mariano Rajoy rejected Mas’s demand for more power to tax and spend for the region.

Catalonia accounts for a fifth of Spain’s economy but it was hit hard by the financial crisis that began in 2008, fueling a surge in pro-separatist feeling.

In 2012 Barcelona saw the first of the latest series of massive Diada demonstrations.

“Three years ago we demonstrated in the Diada and we hope that this year’s will be the definitive one,” said Jordi Fradera, 43, who travelled to Barcelona early on Thursday morning from the town of Girona.

Opponents of secession think cutting themselves off from Spain would be an economic disaster, however.

South of Barcelona in the town of Tarragona on Thursday, the Catalan Civil Society movement called for a rival gathering to denounce independence as a “dead end”. – Rappler.com