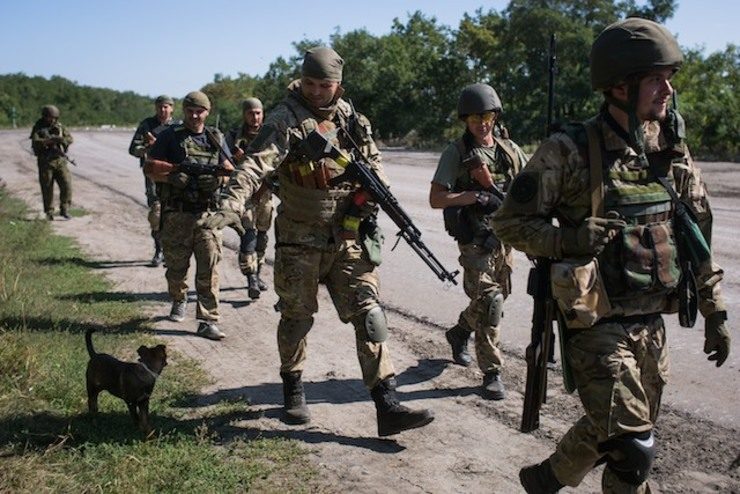 Facebook Twitter Copy URL
Copied
Ukrainian Prime Minister Arseniy Yatsenyuk called on world leaders not to trust Russian President Vladimir Putin despite his decision to sign Moscow up to a truce aimed at ending a five-month war that has claimed more than 2,700 lives

KIEV, Ukraine – Tensions over Ukraine festered after Kiev accused the Kremlin of seeking to “eliminate” the pro-Western former Soviet nation while Moscow charged Washington with orchestrating the entire crisis.

The bitter exchange on Saturday, September 13, in the wake of the toughest Western sanctions yet on Russia came with a fragile 9-day truce once again tested by an hours-long battle for control of a strategic eastern Ukrainian airport.

Russia further stoked tensions by sending a 220-truck convoy into rebel-held territory which it said carried aid but which was never checked by European monitors or Ukrainian soldiers at the border.

Ukrainian Prime Minister Arseniy Yatsenyuk called on world leaders not to trust Russian President Vladimir Putin despite his decision to sign Moscow up to a truce aimed at ending a five-month war that has claimed more than 2,700 lives.

Yatsenyuk accused the increasingly isolated Kremlin chief of deliberately keeping Ukraine in a state of war to create a “frozen conflict” in Russia’s backyard.

“His goal is to take the entire Ukraine… He wants to eliminate Ukraine as an independent country,” Yatsenyuk told an international forum in Kiev.

“He wants to restore the Soviet Union.”

‘Sanctions will get Putin’s attention’

The European-mediated peace deal that Kiev signed with Moscow and two rebel leaders has helped calm fighting across the economically vital but devastated industrial rustbelt that hugs Russia’s border in eastern Ukraine.

But both the United States and Europe remain deeply suspicious of Putin’s intentions and are still waiting for him to pull back 1,000 paratroopers they claim have helped insurgents claw back territory in the days preceding the truce.

Moscow not only denies backing the fighters but also accuses Washington of fomenting the February protests that ousted a pro-Kremlin leader and brought in a new team that struck an historic EU alliance and is now seeking NATO membership.

Lavrov accused Washington of “trying to use the crisis in Ukraine to break economic ties between the EU and Russia and force Europe to buy US gas at much higher prices.”

Russia supplies about a third of Europe’s natural gas needs – a reliance that forced Brussels to shield Gazprom from its other sanctions on state-held energy firms.

But Washington added Gazprom to the list of energy firms that will be denied access to advanced exploration equipment needed for new projects.

Top Russian banks and energy companies have also been barred from borrowing from both US and European capital markets for longer than a month.

The US punitive steps further target a giant defense firm run by a modern-day billionaire who served alongside Putin in the Soviet spy agency in the 1980s.

“These sanctions will get Putin’s attention,” the Eurasia Group political risk consultancy said.

But both US and EU officials have promised to scale back or cancel the measures if Russia sticks by the ceasefire deal.

The European Union has further tried to assuage Russia by delaying until the end of 2015 the implementation of a major trade agreement with Ukraine that the two sides’ parliaments Kiev intend to ratify on Tuesday, September 16.

‘We are being killed’

The diplomatic rhetoric was accompanied by a reported rebel attack on a Donetsk airport that they temporarily seized at the end of May with a force comprised almost entirely of Russian nationals.

“Are Russian forces trying to capture Donetsk airport?” Swedish Foreign Minister Carl Bildt asked on Twitter. “If that is the case then it’s a clear Moscow violation of ceasefire agreement.”

But people living around the airport seemed to point most of the blame on Ukrainian forces who had been shelling Donetsk from just outside the city in an offensive that Putin’s has compared to Nazi Germany’s siege of Leningrad.

“We are being killed here, simply killed,” said a retired miner named Viktor Smolin while pointing to where a mortar shell tore through the roof of a block of flats.

In the rebel-held town of Makiivka, in eastern Ukraine, government forces and insurgents are stationed within kilometers of each other, and the drumming of heavy weapons is steady despite the truce.

The continued stress of war is shattering already stressed nerves among those still living in this industrial region.

“A rocket fell in my garden,” said resident Marina. “It blew out all the windows. Why? No one knows.”

Russia on Saturday angered Kiev still further by pushing across the Ukrainian border a massive truck convoy that it said contained food and supplies for residents of the badly-hit eastern city of Lugansk.

A top security spokesman in Kiev said the deliveries “violated customs-clearing procedures” because neither monitors from the OSCE pan-European security body nor Ukrainian border guards had a chance to inspect the cargo. – With Maria Panina in Moscow, Russia, and Michel Moutot in Donetsk, Ukraine, Agence France-Presse/Rappler.com