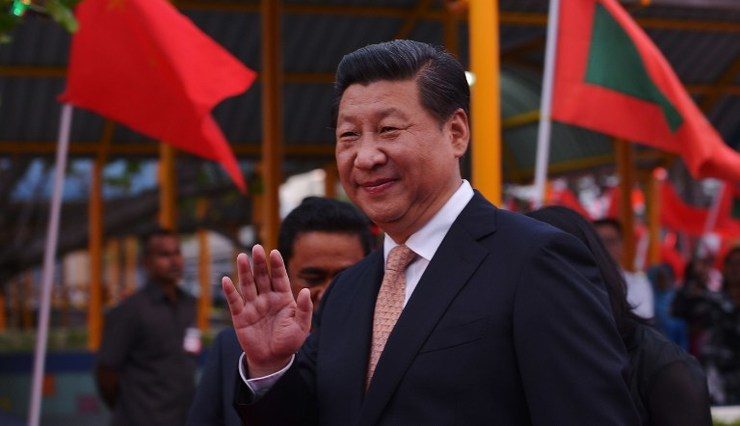 Facebook Twitter Copy URL
Copied
President Xi Jinping says he is eager to boost relations with the Maldives, which is best known for its tourist industry but also straddles major international shipping routes

The Maldives is best known for its tourist industry but also straddles major international shipping lanes, and Chinese investment there has grown significantly as Beijing tries to secure vital trade routes.

In a joint statement, the two countries also said they agreed to cooperate on security issues – a potentially sensitive issue in a region traditionally dominated by India.

“The Maldives welcomes and supports the proposal put forward by China to build the 21st Century Maritime Silk Road, and is prepared to actively participate in relevant cooperation,” the statement said.

“The two sides agreed to enhance cooperation in other areas, such as marine, economy, and security,” it said, without elaborating.

Xi is the first Chinese head of state to visit the Maldives since the former British protectorate gained independence in 1965.

It is his second meeting with President Abdulla Yameen in a matter of weeks, following their talks last month in the Chinese city of Nanjing.

A Maldivian government source said before the meeting that Male was keen to avoid upsetting regional superpower India by bringing up sensitive security issues, since New Delhi considers the islands to be within its sphere of influence.

Yameen said the Maldives was “honored” to be a part of the trade route initiative, flagged by Xi during a visit to Indonesia last year and intended to revive a route running from China through Southeast Asia and the Indian Ocean to Europe.

The proposal called for increased maritime cooperation between China and Southeast Asian nations, and for China to work with partners to develop ports and other maritime infrastructure.

“I am confident that this is the beginning of an era of heightened and sustained cooperation between the Maldives and China,” Yameen said.

Yameen also secured Chinese support for an ambitious project to build a road bridge between central Male island and nearby Hululle island, where the international airport is located.

Chinese have become the largest single group of holidaymakers to visit the Maldives, a nation of 1,192 tiny coral islands scattered some 850 kilometres (530 miles) across the Equator.

The Maldives received just over one million tourists last year and more than 30 per cent of them were Chinese. Tourism accounts for more than a quarter of the $2.3 billion economy.

“Known as ‘a string of pearls that God left in the human world’ and with its simple and warm-hearted people and picturesque scenery, Maldives is a magnet attracting tourists from around the world,” said Xi, adding he was eager to experience the islands for himself.

But as well as being renowned for sandy beaches and turquoise waters, there is also some alarm that the Maldives has become a recruiting ground for jihadists.

At least four nationals are said to have been killed while fighting in Syria this year.

Former president Mohamed Nasheed told Britain’s Independent on Sunday paper at the weekend that up to 200 Maldivians were fighting for the Islamic State in Iraq and Syria. The entire population of the Maldives is only around 330,000 Sunni Muslims.

“Radical Islam is getting very, very strong in the Maldives,” said Nasheed, who lost last November’s run-off election to Yameen. “Their strength in the military and in the police is very significant.”

Eight Chinese were among a group of foreign tourists injured in a bombing in Male in 2007 carried out by suspected Islamist militants.

Xi leaves the Maldives on Tuesday for Sri Lanka before heading on Wednesday to India.

Prime Minister Modi has moved quickly to engage with China, inviting Xi to India soon after taking office in May. – Rappler.com