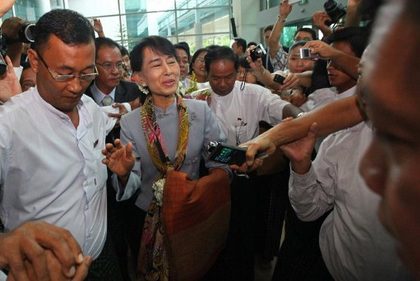 Her visit marks a new milestone in the political changes that have swept the country formerly known as Burma since decades of military rule ended last year, bringing to power a new quasi-civilian government.

“I would like to do my best for the interests of the people,” Suu Kyi told reporters before her plane left Yangon airport.

She will visit Switzerland, Norway, Britain, France and Ireland on her more than two week tour, which will include a speech in Oslo for her 1991 Nobel Peace Prize.

She leaves as western Myanmar is rocked by sectarian violence between Buddhists and Muslim Rohingya that has left dozens dead and prompted President Thein Sein to warn of disruption to the fragile reform process.

Suu Kyi could face calls in Europe to address the underlying sectarian issues, although analysts say she may instead choose to focus on the wider topic of human rights.

“It’s a very explosive situation and whoever touches the issue will have to walk a very, very fine line,” said Aung Naing Oo, a Myanmar expert with the Vahu Development Institute in Thailand.

The Myanmar government and many Burmese consider the Rohingya to be illegal immigrants and view them with hostility.

Even key figures in the democratic movement have come out to say the Rohingya are not one of Myanmar’s ethnic nationalities.

A spokesman for Suu Kyi’s National League for Democracy party said the former political prisoner had instructed him to work “to help both sides equally” before she left for Europe.

Suu Kyi is due to speak at an International Labour Organization conference, address Britain’s parliament and receive an Amnesty International human rights award in Dublin from rock star Bono.

The veteran activist will also join a “family reunion” in Britain, according to her party and celebrate her 67th birthday on June 19 in the country.

For years, since returning to her homeland to care for her sick mother, Suu Kyi did not dare leave — even to see her sons or British husband before his death from cancer in 1999 — fearing the ruling generals would not let her return.

She made her first overseas foray for 24 years earlier this month to visit Thailand.

President Thein Sein is credited for a series of reforms including releasing hundreds of political prisoners, signing peace pacts with armed rebel groups and welcoming Suu Kyi’s party back into mainstream politics.

Her lecture on June 16 in Oslo to accept the Nobel Prize, which propelled her onto the global stage and spurred decades of support for her party’s democratic struggle against authoritarian rule, will be hugely symbolic.

But she may also inject a note of caution — on her first overseas trip in more than two decades, Suu Kyi this month warned world business leaders at a meeting in Bangkok against “reckless optimism” over the democratic reforms.

“She will re-iterate the message that there’s still a long way to go in Burma,” said Gareth Price, an Asia expert at Chatham House in London.

“She will also call for responsible trade and investment and support for the rule of law in Burma, as the reforms are reversible.”

The veteran activist is traveling with her personal assistant, her security chief, the dissident rapper-turned-politician Zayar Thaw and a youth member from her National League for Democracy (NLD) party, Nay Chin Win.

There is also a strong personal dimension to the tour, although her party has declined to say whether she will see both her sons, Kim and Alexander Aris, as well as her grandchildren.

While Kim has visited his mother in Myanmar since her release, Alexander has not and he now lives in the United States. – Shwe Yinn Mar Oo, Agence France-Presse