Sep 20, 2014 7:29 PM PHT
Agence France-Presse
Facebook Twitter Copy URL
Copied
Syrian Kurds have been massing since Thursday on the other side of the border as the IS extremists seized dozens of villages in a lightning offensive 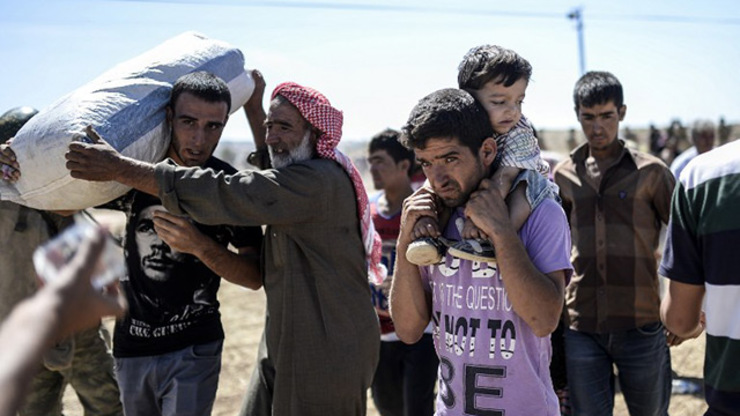 ISTANBUL, Turkey – Some 45,000 Syrian Kurds fleeing advancing Islamic State of Iraq and Syria (ISIS) jihadists have poured across the border into Turkey since Ankara opened up its southern frontier, the country’s deputy prime minister said.

“As of now, 45,000 Syrian Kurds have have crossed the border and entered the Turkish soil from 8 entrance points,” Numan Kurtulmus told reporters on Saturday, September 20.

“No country in the world can take in 45,000 refugees in one night, bring them here unharmed, and find them a shelter without a problem. This proves how powerful Turkey is,” he said.

Syrian Kurds have been massing since Thursday on the other side of the border as the IS extremists seized dozens of villages in a lightning offensive as they close in on the strategic Syrian town of Ain al-Arab, known to the Kurds as Kobane.

Turkey opened its border on Friday after new fighting near Kobane prompted a mass exodus of residents.

Ankara, which has given shelter to some 1.5 million refugees from the Syrian conflict, has been refusing to accept any more for fear of being overwhelmed.

On Saturday, Ankara announced the 49 of its nationals that the IS extremists seized from its consulate in Mosul in June had been released and were back in Turkey.

Some 4,000 Syrian Kurds – mostly women, children and elderly people – crossed to the southern Turkish town of Dikmetas on Friday.

“We have opened our doors because we had to,” Kurtulmus said, adding that Turkey was ready to cope with an even larger refugee influx. “We are ready for both the worst case and the best case scenario,” he said.

UNHCR on Friday welcomed “Turkey’s prompt action in ensuring safe haven for and extending support to Syrian-Kurdish civilians seeking to cross its borders.”

“It is of life-saving importance, that these people have access to safe haven,” said Amin Awad, Director of UNHCR’s Middle East and North Africa Bureau. “Its actions… were right and humane in a very difficult situation.” – Rappler.com