Sep 23, 2014 7:08 AM PHT
Ayee Macaraig
Facebook Twitter Copy URL
Copied
'We have to keep knocking down those external and internal obstacles that are cultural and religious,' says Hillary Clinton on the gender pay gap NEW YORK, United States – “We cannot grow the global economy if we do not open the doors to women to participate.”

Former US Secretary of State Hillary Clinton expressed disappointment with the gender pay gap, saying it remains a challenge even in developed countries like the United States.

Speaking at the annual meeting of the Clinton Global Initiative (CGI) here on Monday, September 22, the longtime women’s rights advocate drew attention to new data from the US Census Bureau showing that women earned 78 cents for every dollar men did in 2013.

“It’s been quite exciting to see a lot of the changes that are going on but it’s also been somewhat distressing to see how hard change still is, including in my own country. We’ve had a survey about poverty in the US and looking at incomes that came out last week. One of the big news items was that women’s income compared to men’s income had gone up one penny. We are now are 78 cents on a dollar!”

The woman who is considering again vying to become America’s first female president said that the survey showed that hurdles to women empowerment and gender equality cut across global divides.

We have to keep knocking down those external and internal obstacles that are cultural and religious, and based on views of women’s roles and their capacities, that are just no longer affordable.

“So when I talk about this, I’m not just talking about somebody else in some other region of the world. I’m also talking about developed countries, that we have to keep knocking down those external and internal obstacles that are cultural and religious, and based on views of women’s roles and their capacities, that are just no longer affordable,” she said.

The former US first lady made the comments after moderating a discussion with IBM CEO Ginni Rometty and World Bank President Jim Yong Kim at the opening plenary session of CGI with the theme “Reimagining Impact.” 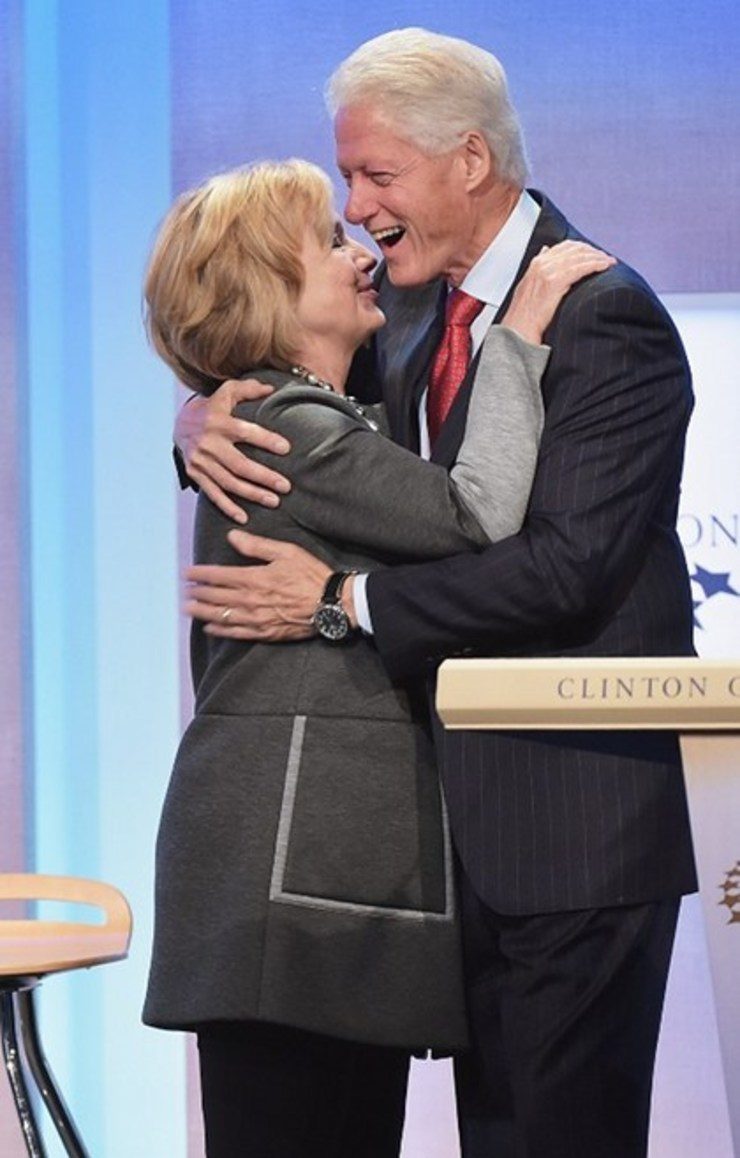 Former US President Bill Clinton echoed the views of his wife, saying women’s political participation is not an adequate gauge for equality.

“It’s important not to forget that sometimes the most significant impact is not just when a woman is elected president but when there’s something done at the bottom of the economic pyramid,” said Clinton in a separate panel.

He cited the experience of women in Bangladesh and Peru as an example.

“Bangladesh had years and years of constant conflict between two women leaders, so much so that it almost paralyzed the government …. In Peru, [we have a project that] empowers women to become entrepreneurs, very poor villages up in the mountains and they deliver goods that have never, never been available to people before and all of a sudden, all these women who have no income become, by Peruvian standards, middle class.”

Clinton said, “I think it’s important that we don’t get all carried away by politics but look at people at the bottom of the pyramid.”

The former President established CGI in 2005 to convene world leaders in government and the private sector to solve pressing global problems.

Former President Clinton asked Chilean President and ex-UN Women executive director Michelle Bachelet about the female presidents of Latin America. He quipped, “Most of the rest of the world thinks of Latin America as a real macho place and is really surprised that they’re doing so much better than other people.”

Bachelet noted that Chile has a female president, Senate president, and women leaders of trade unions and universities. She was re-elected president of Chile in December 2013, after becoming her country’s first chief executive in 2006.

“But on the other hand, we’re still so far from away where we should go and there’s still a lot of macho men in Latin America so it’s not a perfect world still for women,” she said, drawing laughter from the crowd,” Bachelet said.

A former defense and health minister, Bachelet said that while the political empowerment of women is not the ultimate benchmark for progress, it is vital. “Because when there are no women in high-level positions, people can talk about equal rights but it’s just speech. But when you see that women are able to be in very important positions and do it well, then it’s a model for others.”

Despite “much evidence” on the social and economic benefits of women empowerment, Bachelet said getting action on the issue is another matter.

“The thing is when you talk to many heads of state, heads of government about this, they say, ‘Yeah, yeah’ but nothing happens really. So I always ask myself: how are we able to build strong, decisive arguments that will show how the world will be better if men and women have equal rights and opportunities?”

Despite the difficulties in the advocacy, former Secretary Clinton hailed initiatives like the World Bank’s “She Works” partnership for women’s employment.

World Bank’s Kim said it is a partnership with private corporations to bring more women into the work force, highlighting issues like leadership and fighting sexual harassment.

“If you take very systematic measures to improve the quality of women who work and to recruit more, we think you can make a lot of gains. Most of the economies far behind in women’s participation are asking us for help and how to increase the participation. This is coming from a private sector angle to make it easier and more desirable,” Kim said.

IBM’s Rometty, the first female leader of the technology and consulting company, talked about IBM’s “Supplier Connection” initiative to link women in small and medium enterprises with bigger businesses.

Hillary Clinton asked Rometty how to get more women in science, technology, engineering and mathematics or STEM. Rometty responded that representation and inclusion are not enough to ensure diversity.

“It’s really about the word engagement. It means you are comfortable in any way to contribute. You don’t just sit there. In addition to engagement, you have to provide access for this to happen. To me, that is your way to unlock and expose an entire segment of the world population,” Rometty said. – Rappler.com