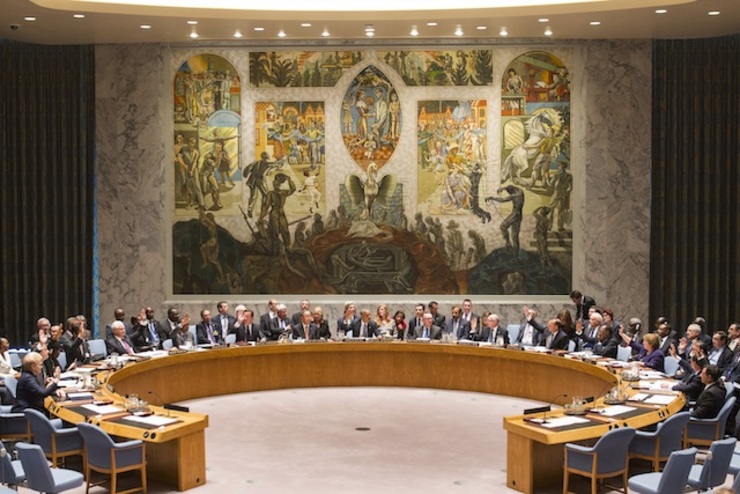 In just the second time an American president presided over the Council, Obama led the heads of state-level meeting and urged his counterparts to prevent the movement of foreign jihadis, and to counter the violent extremism they espouse.

The US-drafted resolution is binding on all 193 UN member states, requiring them to take steps to prevent suspected foreign terrorist fighters from entering or transiting their territories, and to enact domestic legislation to prosecute them.

“If there was ever a challenge in our interconnected world that cannot be met by any one nation alone, it is this: terrorists crossing borders and threatening to unleash unspeakable violence. These terrorists believe our countries will be unable to stop them. The safety of our citizens demand that we do,” Obama said on Wednesday, September 24.

UN Secretary-General Ban Ki-Moon briefed the Council that over 15,000 foreign fighters from more than 80 nations traveled to Syria to join terrorist organizations like the Islamic State of Iraq and Syria (ISIS), and the Al-Qaeda-linked Al Nusra Front.

Ban said, “As Muslim leaders around the world have said, groups like ISIL – or Da’ish – have nothing to do with Islam, and they certainly do not represent a state. They should more fittingly be called the “Un-Islamic Non-State.”

In his speech before the Council and the UN General Assembly, Obama acknowledged the difficulty with UN resolutions: enforcement. He said next year, countries should announce concrete steps to counter extremist ideologies.

“Resolutions alone will not be enough. Promises on paper cannot keep us safe. Lofty rhetoric and good intentions will not stop a single terrorist attack.”

The resolution obliges states to criminalize attempts to travel abroad and join a terrorist organization, and to prevent suspected terrorists from entering or traveling through their territory. Countries are also to require airlines to share passenger lists, and increase the sharing of information on these fighters. 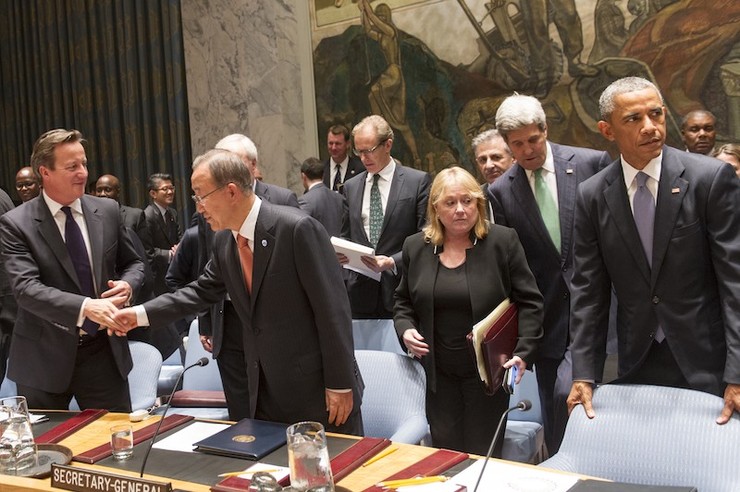 The document expands a Security Council resolution adopted after 9/11, and has the second most number of co-sponsors ever, according to the US Mission to the UN.

The meeting is part of US efforts to gain international support for its strategy to “degrade and destroy” ISIS, a notorious terror group that beheaded soldiers, journalists and aid workers, persecutes religious minorities, and rapes and enslaves women.

The international community fears that foreign fighters will return to their home countries and carry out terror attacks using the skills they learned in battle, as in the case of 9/11 and the 2002 Bali bombings.

Even before the resolution was adopted, Cameron and Canadian Prime Minister Stephen Harper said their countries already initiated measures like seizing passports, and ensuring airlines comply with no-fly lists.

Abbott highlighted the threats Australia and Southeast Asia face from ISIS. He noted that last week, an Australian operative in Syria tasked his local network to conduct “demonstration killings” while this week, an Australian terror suspect attacked two policemen.

“Even in what seem to be darkening times, there are grounds for hope: the ISIL horror has generated all-but-universal revulsion. Islamic leaders from Prime Minister Najib [Razak] of Malaysia, and President [Susilo Bambang] Yudhoyono of Indonesia, to the Grand Mufti of Australia, have declared that the ISIL movement is against God, against Islam and against our common humanity,” Abbott said.

In his address before the General Assembly, Obama likewise acknowledged strides in Malaysia and Indonesia as countries offering “alternatives to terror.”

“We see it in Malaysia, where vibrant entrepreneurship is propelling a former colony into the ranks of advanced economies. And we see it in Indonesia, where what began as a violent transition has evolved into a genuine democracy.”

Rappler earlier reported that about 50 Indonesians, and 20 Malaysians went to fight with ISIS in Syria. Abbott said the number is at least 60 for Australia

Obama said airstrikes and military action are not enough. “Violent extremist terrorism must be rejected. We must change hearts and minds.” – Rappler.com