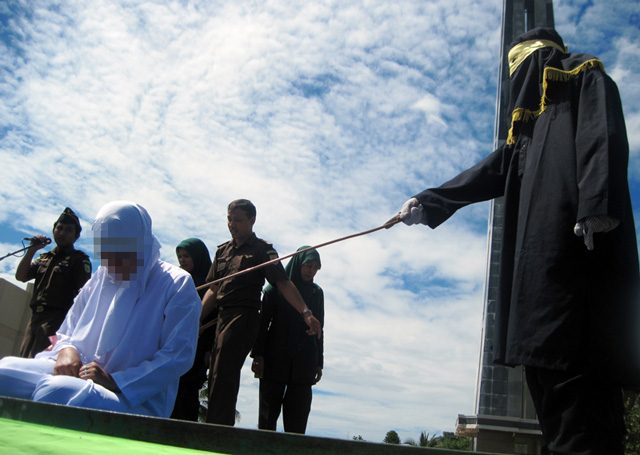 BANDA ACEH, Indonesia – It’s official: Muslims and non-Muslims alike will soon be subjected to a strict new Islamic Sharia bylaw in Aceh that has been welcomed by conservatives and decried by human rights activists.

Indonesia’s westernmost province has been implementing Sharia law since 2001 and is the only province in the Muslim-majority country to do so. But the bylaw passed by the local legislature early on Saturday, September 27, imposes harsher penalties on a longer list of offenses. Offenses not previously regulated such as adultery and homosexual acts are now also punishable with up to 100 lashes. But falsely accusing a person of adultery without presenting 4 witnesses merits 80 lashes.

The harshest punishment in the law – 200 lashes or 200 months in prison – is reserved for child rapists.

A key change is that it will for the first time apply to some 90,000 non-Muslims who live in the province, Indonesians and foreigners alike.

The law will go into effect after a period of information dissemination.

The new bylaw is a watered-down version of one that prompted international outrage when it was passed by Aceh‘s legislature in 2009 as it included stoning to death as punishment for adultery. It was later overturned by the provincial governor. But rights activists are still unhappy about it.

Aceh-based human rights activist Zulfikar Mohammed has expressed concern that the new law would embolden the province’s Sharia police to discriminate against the non-Muslim minority in the province.

“Who can guarantee that the Sharia police will not act beyond the limits of their authority? This often happens,” he said.

Chika Noya, an independent activist for lesbian, gay, bisexual and transgender (LGBT) people, also said the law was a “big step back” for LGBT rights in Indonesia. Gay sex is not illegal in the rest of the country.

“It’s as if we’re going back hundreds of years,” Noya told AFP on Friday ahead of the vote. “The Indonesian government is hypocritical if it lets the bylaw pass. They say they are democratic, they have ratified so many human rights instruments – why should they allow Aceh to violate basic human rights?”

The director general of regional autotomy at the Ministry of Home Affairs, Djohermansyah Djohan, previously said his department could shoot the law down if it violated human rights.

Amnesty International has expressed concern over the bylaw and has called for an end to caning in Aceh, saying it goes against international laws on torture and rights, as well as Indonesia’s own constitution.

In the new law, canings – which are carried out with thin rattan sticks in public and are aimed at humiliating, rather than causing physical pain – can be substituted with payments of pure gold or jail time.

The bylaw was unanimously passed by all factions in the local legislature.

“The people of Aceh have long been waiting for this law, for the full implementation of Islamic law in the veranda of Mecca,” Tgk. Muhammad Harun, a spokesman for the Aceh Party, said.

Aminuddin, a spokesman for the Golkar faction, also said they have carried out several reviews and in-depth studies of the materials in the law and found that “the design is nearly perfect and the law is adequate.”

“We’re grateful for the approval,” he added.

Lawmakers also said public officials and law enforcement officers who violate the law would receive the harshest punishments.  – with a report from Agence France-Presse/Rappler.com