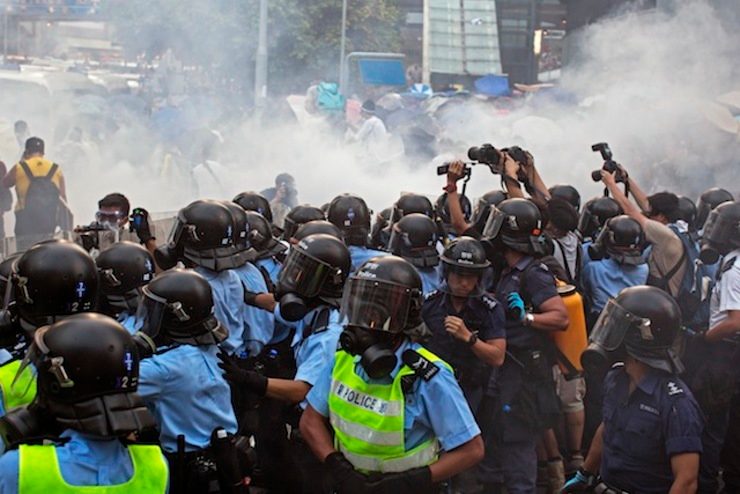 HONG KONG (UPDATED) – Police fired tear gas as tens of thousands of pro-democracy demonstrators brought parts of central Hong Kong to a standstill Sunday, September 28, in a dramatic escalation of protests that have gripped the semi-autonomous Chinese city for days.

There were chaotic scenes, with protesters screaming “Shame!” at police as they tried to shield themselves from the clouds of gas, Agence France-Presse reporters said.

Several scuffles broke out between police in riot gear and demonstrators angered by the use of tear gas, which is rare in Hong Kong. An elderly woman was seen being carried away by protesters.

Police had earlier used hand-held pepper spray on demonstrators who had spilt onto a major multi-lane highway after breaking through barricades set up to stop people swelling the crowds camped outside Hong Kong’s government headquarters since Friday, September 26.

Traffic had ground to a halt on busy Connaught Road, with police forced to retreat as the protesters rushed towards the crowds outside government headquarters on the other side. They cheered and embraced each other in the middle of the road, a major city artery usually filled with whizzing taxis and buses.

China, which stations a military garrison in Hong Kong, said it was confident the city’s administration could handle the protest.

The extraordinary scenes came at the climax of a week of student-led action against China’s refusal to grant full democracy to the former British colony.

Beijing said that while it would allow elections for Hong Kong’s leader in 2017, it would insist on vetting the candidates.

Students have boycotted classes in the past week, while the increasingly tense protests have also seen them mob the city’s leader and storm into the complex housing government headquarters.

Prominent pro-democracy group Occupy Central threw its weight behind the protests on Sunday, saying they were bringing forward a mass civil disobedience campaign that had been due to start on October 1.

The group had sparked months of heated debate in the city of seven million over its plan to bring Hong Kong’s financial district to a standstill with a mass sit-in. On Sunday they appeared to have come close to reaching that goal.

Hong Kong’s leader, Chief Executive Leung Chun-ying, told a press conference his administration was “resolute in opposing the unlawful occupation actions by Occupy Central”, branding its activities illegal as they were designed to paralyze the city.

He said his government would hold more public consultations on the planned political changes – a move already scheduled before the protests.

‘The world needs to know’ 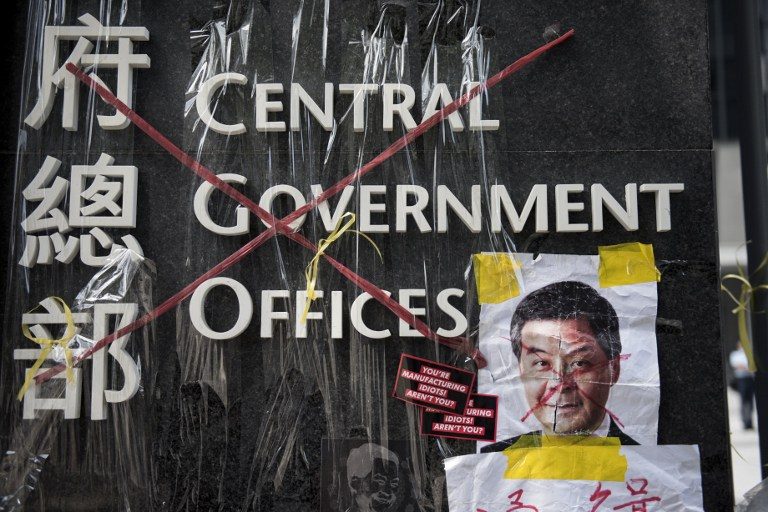 Traffic on the busy Connaught Road had already been heavily slowed by a man who had climbed onto the outside of a bridge and threatened to jump unless protesters were allowed through police lines. Firefighters were forced to place a large inflatable mat on the road below.

He surrendered shortly after the protesters broke through.

Ryan Chung, a 19-year old student watching events unfold, said: “We have the right to stay here and to protest. The world needs to know what is happening in Hong Kong. They need to know we want democracy but don’t have it.”

The crowds of protesters camped outside the city’s government headquarters had swelled on Saturday night, September 27, to more than 10,000, with scuffles with police overnight as lines of officers pushed back surges of people with riot shields.

“From now on there will be more confrontation, possibly violent ones between citizens and police,” he told Agence France-Presse.

But he added that with Beijing maintaining a hardline stance, it was difficult to see a way out of the standoff.

“The government needs to handle the students very carefully – any mishandling will spark larger acts of civil disobedience,” he said.

Former colonial power Britain handed Hong Kong back to China in 1997 under a “one country, two systems” deal that guarantees liberties not seen on the mainland, including freedom of speech and the right to protest.

But tensions have been growing in the southern Chinese city over fears that these freedoms are being eroded, as well as perceived political interference from Beijing.

Paraphrasing a spokesperson with the Hong Kong and Macau Affairs Office of China’s State Council, the Xinhua news agency report also said Beijing “firmly opposes all illegal activities that could undermine rule of law and jeopardize ‘social tranquility’ and it offers its strong backing” to the Hong Kong government. – Rappler.com