Hong Kong protests: what happens next? 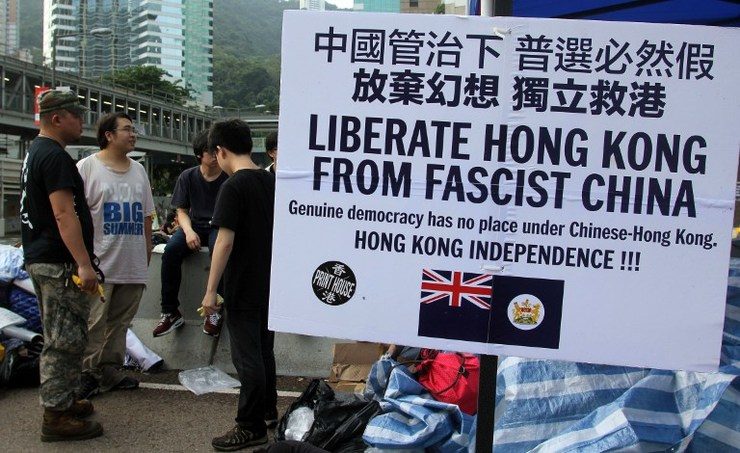 Facebook Twitter Copy URL
Copied
With neither side willing to budge, what are the possible scenarios over the coming days?

HONG KONG – Hong Kong has been plunged into the worst political crisis since its 1997 handover as pro-democracy activists take over the streets following China’s refusal to grant citizens full universal suffrage.

On one side is a coalition of pro-democracy groups who have brought paralysis to parts of the city, calling on Chief Executive Leung Chun-ying to resign and for Beijing to rescind its decision that candidates to succeed him in 2017 elections be vetted by a committee of loyalists.

On the other side is Leung’s local government, backed by Beijing, who insist that the decision will stand.

They argue that the electoral reform package on the table – meaning that Hong Kong’s leader will for the first time be elected by popular vote in 2017 – is already an improvement on the current system, under which the chief executive is appointed by a Beijing-controlled committee.

But protesters call that proposal “fake democracy” because only two to three candidates who receive backing from a loyalist nomination committee will be allowed to stand for election in the first place, effectively barring anyone critical of Beijing.

With neither side willing to budge, what are the possible scenarios over the coming days?

For the last three nights demonstrators have managed to draw crowds of tens of thousands onto Hong Kong’s streets at key intersections. Many streamed into the city’s Bauhinia Square Wednesday morning to protest at China’s National Day ceremony, booing as helicopters carrying the a large Chinese flag and smaller Hong Kong flag flew overhead.

With Wednesday and Thursday (October 1 and 2) being public holidays, numbers could continue to swell, especially if the police stick to the low profile they have kept ever since coming under heavy criticism for tear-gassing crowds on Sunday night, September 28.

A continued blockade of vital carriageways and ever-growing crowds would place intense pressure on the government to respond, either by meeting some of the protesters’ demands or by cracking down on them.

Analysts say Leung’s resignation, while unlikely, could take some of the momentum away from the protesters.

Although the numbers for the last few nights have been impressive, pro-democracy groups are under pressure to keep the crowds large.

A dwindling of supporter numbers on the streets could lead to a loss of momentum and embolden the city authorities to send police in to clear those who remain.

The smaller protest sites are the most vulnerable to clearances. Each morning only a handful of protesters have been seen in the Mong Kok and Causeway Bay districts as many leave to shower and rest.

Demonstrators also have to take note of wider public opinion within a city proud of its hard-won reputation for being a good place to do business.

Although sporadic arguments have taken place between commuters and shop owners angry at the disruption caused, there has been little public backlash so far.

That could change if the inconvenience caused by the protests extends into further days or weeks.

And while the protests have been overwhelmingly peaceful and mild mannered, protest leaders know radicals in their midst could derail that.

“They feel that the fringe elements may try and influence the younger elements to take the lead in acts of civil disobedience,” risk consultancy Intelligent Security Solutions wrote in a recent briefing note.

Faced with the prospect of ongoing paralysis and increasingly unhappy political masters in Beijing the city authorities could decide to send the riot police back in and make a concerted attempt to clear the streets.

Hong Kong police have refused to rule out redeployment of tear gas or even rubber bullets. And with a stretched and exhausted force tempers could flare.

But direct confrontations risk creating another groundswell of support for the demonstrators as was seen on Sunday night when the use of tear gas brought thousands of fresh protesters onto the streets.

Some analysts, meanwhile, believe the movement is no longer entirely in the control of protest leaders.

“Even with the arrest of organizers and suspected leaders, the movement could sustain itself,” Steve Vickers Associates, a risk consultancy, wrote in a briefing note Tuesday, September 30.

The most controversial option would be if Beijing decided Hong Kong authorities could no longer handle the protests and decided to send in the People’s Liberation Army.

Rumours have frequently swept protest camps that the PLA, which maintains a garrison in the city, will be deployed. But so far there has been no evidence of that.

Both Leung and Beijing have said Hong Kong can handle its own affairs. And any decision to send in mainland security forces would cause condemnation both in Hong Kong and the wider world.

One Western security analyst, who asked not to be named, told Agence France-Presse that PLA deployment was “the least likely option”.

Instead, the analyst said, Hong Kong police could bolster their numbers by transporting officers from mainland China and placing them in local uniforms.

“That way they could still claim the protests were being handled internally,” he said. – Rappler.com