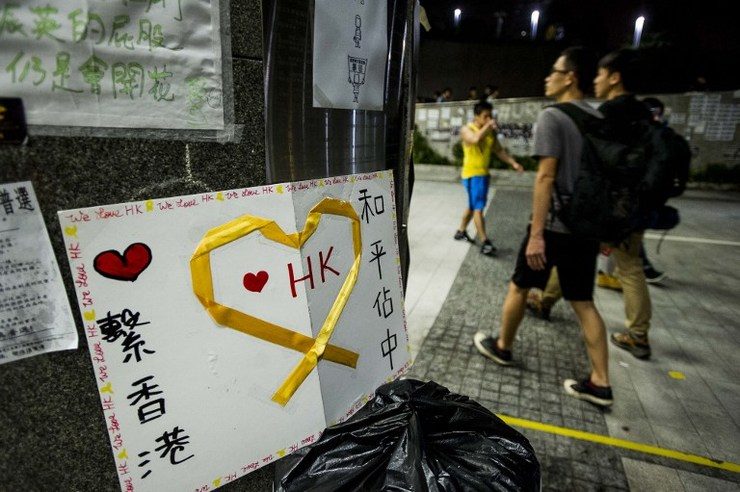 Facebook Twitter Copy URL
Copied
(UPDATED) But while the crowds outside had dwindled to less than a thousand by dawn on Monday, some protesters make it clear they have no intention of going home

HONG KONG (4th UPDATE) – Hong Kong’s pro-democracy protesters remained stubbornly encamped on the streets as dawn broke on Monday, October 6, just hours before a government deadline to clear key thoroughfares they have blockaded for more than a week.

The city’s embattled leader Leung Chun-ying has warned he will “take all necessary actions to restore social order” after a mass campaign for free elections that has seen tens of thousands of people pour onto the streets.

Leung was forced to shut government headquarters on Friday, October 3 – leaving 3,000 civil servants at home – because of the massed ranks of protesters blocking its access roads. He has insisted they must reopen on Monday.

But while the crowds outside had dwindled to less than a thousand by dawn on Monday – making the complex accessible to workers by both road and foot – some protesters made it clear they had no intention of going home.

“We’re going to be here until we get a response from the government,” said 20-year-old student Jurkin Wong as he chatted with friends who had just woken up.

“We have to stay here. It’s for our future.”

The protesters are demanding the right to nominate who can run for election as the former British colony’s next leader in 2017. China’s Communist authorities insist that only pre-approved candidates will be able to run, which activists dismiss as “fake democracy”.

Handed back to Chinese rule in 1997, Hong Kong is governed under a “one countries, two systems” deal that guarantees civil liberties not seen on the mainland, including freedom of speech and the right to protest.

But tensions have been rising over fears that these freedoms are being eroded, as well as rocketing inequality in the key financial hub.

There was a relaxed atmosphere amongst the largely youthful crowds outside government headquarters early Monday, with many expressing doubt that the police would use force to clear them from the massive highway they have brought to a standstill.

A striking statue of a man defiantly wielding an umbrella – which has become a symbol of the democracy movement – was put up at the site in Hong Kong’s Admiralty district to loud cheers.

But the protesters were divided over whether they would stay and resist any attempt to remove them on Monday, with concerns growing that their campaign could be losing direction after a week-long standoff that has at times erupted into violence.

“If there is any violence or any (use of) weapons, I think I will probably go home,” admitted 27-year-old lawyer Chan Wang-Ingai.

But at a second protest site across the harbor in the packed shopping district of Mong Kok, some demonstrators were in fighting mood.

“We are not going to leave before we get what we want – even if they shoot us with rubber bullets,” said Oscar Ng, who wore a bicycle helmet on his head and a mask to protect his face.

The Mong Kok protest has been the scene of ugly clashes in recent days, with demonstrators angrily accusing police of bringing in hired thugs from triad criminal gangs to stir up trouble – a claim authorities have strongly denied.

In a minor breakthrough, student leader Lester Shum met Sunday, October 5, with mid-ranking officials with the aim of setting conditions for a meeting with Leung’s deputy Carrie Lam.

Students have been at the vanguard of the so-called “umbrella revolution”, and the government offered the talks last week in a bid to end an impasse that has wreaked havoc with the city’s transport system and taken a heavy toll on businesses.

University staff made an impassioned plea Sunday for students to head home after Leung issued an ominous warning that the situation could “evolve into a state beyond control” if the protests do not end soon.

“The most pressing task for the government is to reopen access to the CGO (Central Government Offices) on Monday so that some 3,000 CGO staff can return to their workplace and continue to provide services to the public,” Leung said at the weekend.

Secondary schools in the affected areas would also reopen, officials said, as the city administration pushed for Hong Kong to get back to normal.

Student leaders and the government have both said they are willing to enter talks aimed at ending the deadlock, but only under certain conditions.

The government said “the door to dialogue is always open, if the (main student union) HKFS is willing”, calling on them to help clear protesters from areas around Admiralty.

HKFS, the Hong Kong Federation of Students, said allegations that police had failed to protect them from attacks by aggressive counter-demonstrators must be investigated before agreeing to talks.

“Stop threatening and suppressing all the occupiers – then there is possibility to talk,” said HKFS leader Alex Chow. – Rappler.com