Oct 20, 2014 2:06 PM PHT
Rappler.com
Facebook Twitter Copy URL
Copied
'As the captain of the ship as trusted by the people, I urge you all to get on the ship of the Republic of Indonesia and sail towards Indonesia Raya' The following is an unofficial translation of President Joko Widodo’s speech at his official swearing-in ceremony on Monday, October 20, 2014:

We, Jokowi and JK (Jusuf Kalla), have just taken our oaths. That oath has a deep spiritual meaning that enforces our commitment to become a big nation. It is time to unite our hearts and hands, and continue the heavy work to transform Indonesia into a sovereign country politically, self-sufficient economically, and with a strong character culturally.

Follow the inauguration on Monday through Rappler’s Live Blog 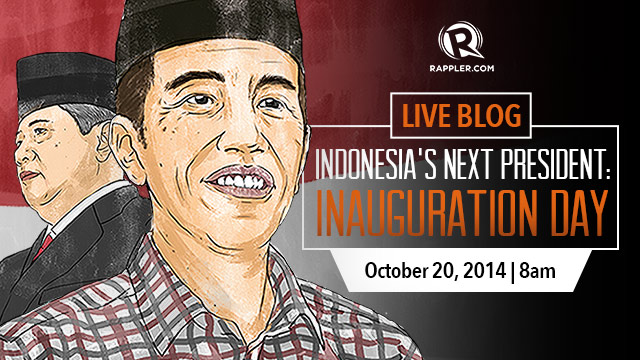 My administration will ensure that every person in the motherland feels the presence of their government. I am certain that the nation will be stronger if state institutions (lembaga negara) do their work according to the people’s mandate, as written in the Constitution.

To the fishermen, laborers, farmers, bakso (meatball) vendors, street vendors, drivers, academics, teachers, military, police, entrepreneurs, and professionals, I urge you to work hard, gotong royong, because this is the historic moment for us all to move together, to work, work, and work.

We want to be present among other independent nations with dignity, with pride. We want to build our own civilization, we want to become a creative nation, a nation that contributes nobility to the world’s civilization.

We have to work hard to restore Indonesia as a maritime country. The oceans, the seas, the bays, and the straits are the future of our civilization.

We have far too long turned our back on the seas, the oceans, the straits, and the bays. It’s time to restore everything so that “jalesveva jayamahe” (in the sea we will triumph), a slogan used by our forefathers, will echo again.

Building a country cannot be done alone by its president and vice president, and the administration that I lead, but we need a collective strength. The next 5 years will be a momentum to show our freedom as a nation. Therefore, work, work, and work is the priority. I am certain with hard work and gotong royong we will be able to protect Indonesia as a whole, improve welfare, and contribute to the world order in accordance with the principles of freedom, eternal peace, and social justice.

In the name of the people and the government of Indonesia, I thank and appreciate the attendance of fellow state leaders and special delegates. As the third biggest country in the world with the biggest Muslim population in the world, as an archipelagic nation and the biggest nation in Southeast Asia, Indonesia will keep on practicing a free and active foreign diplomacy, for the national interest, and contribute in creating a world order in accordance with the principles of freedom, eternal peace, and social justice.

To conclude this speech, I implore you fellow countrymen, to remember one thing as said by the first president of the Republic of Indonesia, Bung Karno. That in order to build Indonesia into a big nation, prosperous and peaceful, we need the spirit of courage to face the waves.

As the captain of the ship as trusted by the people, I urge you all to get on the ship of the Republic of Indonesia and sail towards Indonesia Raya (Great Indonesia).

We will raise the mast, a strong one. We will face the tides in the ocean with our own power. And I will stand with the people and the Constitution.

May God bless our noble intention.