Facebook Twitter Copy URL
Copied
(UPDATED) 'A vaccine is not the magic bullet, but when ready, it may be a good part of the effort to turn the tide of the epidemic,' a World Health Organization official says

GENEVA, Switzerland (2nd UPDATE) – Hundreds of thousands of Ebola vaccine doses could be rolled out to West Africa by mid-2015, the World Health Organization said Friday, October 24, after new cases of the virus were reported in New York and a two-year-old girl died in the first case in Mali.

Two American nurses were declared cured of Ebola and one – Dallas-based Nina Pham – hugged President Barack Obama at the White House to prove it.

But the states of New York and New Jersey ordered mandatory quarantine for medics who had treated victims of the disease in West Africa.

Steps include mandatory quarantine 21 days of any individual who has had direct contact with an Ebola patient while in Guinea, Liberia or Sierra Leone, including medics who treated Ebola patients.

Additionally, anyone who has travelled to the affected regions but not had direct contact with an Ebola patient will be actively monitored by public health officials and quarantined if necessary.

Europe’s main stock markets fell on Friday over concerns about New York’s first case, in a doctor who tested positive after returning from treating sufferers in Guinea, one of the countries at the epicenter of the world’s worst outbreak of the disease.

The search for an effective vaccine to fight the disease took on fresh urgency as the WHO said several hundred thousand doses could be available in the “first half” of 2015.

“All is being put in place to start efficacy tests in the affected countries as early as December,” WHO assistant director general Marie-Paule Kieny said.

Kieny’s comments came after closed-door talks to try to find a vaccine to beat a disease that has killed almost 4,900 people and ravaged the west African nations of Guinea, Liberia and Sierra Leone.

Experts are pinning their hopes on the experimental vaccine rVSV, with doses arriving in Geneva for a new round of trials, and ChAd3, made by Britain’s GlaxoSmithKline.

Five other potential vaccines are in the pipeline.

Whichever proves effective in trials, WHO hopes to send huge numbers of doses to Africa for “real-world” tests.

“The pharmaceutical companies developing all these vaccines are committing to ramping up the production capacity to millions of doses to be available in 2015,” said Kieny.

There is currently no licensed cure for Ebola, which is transmitted through close contact with the bodily fluids of an infected person or someone who has died from the disease. 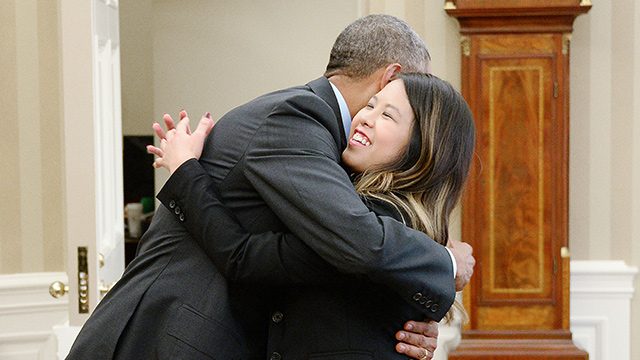 New York’s mayor said America’s biggest city was fully equipped to handle Ebola as authorities moved to shut down fears of the virus spreading after a 33-year-old doctor, Craig Spencer, became the first American case of the virus outside Texas.

He was rushed to a Manhattan hospital Thursday, October 23, with fever and gastrointestinal symptoms, a week after returning from treating Ebola sufferers in Guinea with the charity Doctors Without Borders.

His fiancee and two of his friends are in quarantine but appear healthy, officials said.

“There is no cause for alarm,” Mayor Bill de Blasio told a news conference. “New Yorkers need to understand the situation is being handled and handled well.”

There was better news when Pham – the first US healthcare worker to contract Ebola – was declared free of the virus.

“I am on my way back to recovery even as I reflect on how many others have not been so fortunate,” Pham said before meeting Obama.

She and her nursing colleague Amber Vinson, who was also given the all-clear, caught the disease while treating a Liberian Ebola sufferer, Thomas Eric Duncan, at a Dallas hospital. He later died.

But in the West African nation of Mali, a two-year-old girl who recently returned from a trip to neighboring Guinea with her grandmother died from the virus.

The toddler’s condition had shown signs of improvement earlier, but a source in the prime minister’s office said she had succumbed to the virus in the western region of Kayes.

The Malian government advised residents to avoid all non-vital travel to affected areas.

The WHO said the Malian authorities were tracing everyone who had contact with the girl and her grandmother and 43 people had been placed under observation.

In Ivory Coast, which has escaped Ebola until now, a desperate search was on for a health worker from Guinea who may have fled across the border after having contact with a patient who died of the disease.

The man had still not been tracked down after 48 hours late Friday.

African countries have pledged to send more than 1,000 health workers to the most severely-hit countries.