Oct 30, 2014 8:54 PM PHT
Facebook Twitter Copy URL
Copied
'It is too soon to draw conclusions on the reduction of Ebola cases in Monrovia,' says Fasil Tezera, MSF head of mission in Liberia 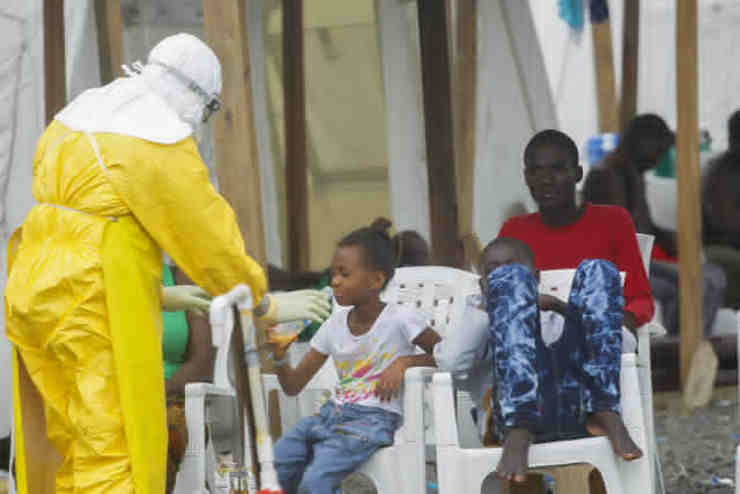 MONROVIA, Liberia – Global aid agency Doctors Without Borders (MSF) urged caution on Thursday, October 30, over claims of a slowdown in infections in Ebola-hit Liberia, saying the apparent drop could be due to poor management of the sick.

The warning follows an announcement by the World Health Organization (WHO) that data from a range of sources including funeral directors and treatment centers indicated lower admission rates and burials.

But the medical charity, known by its French initials MSF, warned that “mandatory cremation of dead bodies and a poor ambulance and referral system could also be reasons for this decrease in admissions”.

“It is too soon to draw conclusions on the reduction of Ebola cases in Monrovia,” Fasil Tezera, MSF head of mission in Liberia, said in a statement.

“While the number of admissions in MSF’s 250-bed Monrovia Ebola center has dropped to around 80, we do not have a full picture of the extent of the outbreak and estimates might not be reliable.”

An MSF spokeswoman in Dakar told Agence France-Presse many people in the capital were calling the Ebola hotline to report that they were sick but were not being picked up because of a lack of ambulances and were going missing from the statistics.

“The present epidemic is unpredictable: we have seen a lull in cases in one area only to see the numbers spike again later,” Faisal added.

WHO assistant director-general Bruce Aylward told reporters in Geneva on Wednesday that while labs were also seeing a “plateauing or slight decline” in the number of confirmed cases, the crisis was far from over.

He added that he was “terrified that the information will be misinterpreted and that people will begin to think Ebola is under control.”

The Ebola outbreak that has been ravaging west Africa has claimed 4,922 lives, according to the latest update from the WHO. The vast majority of deaths were in Liberia, Guinea and Sierra Leone. (FAST FACTS: Ebola outbreak)

Aylward said that the number of Ebola cases registered worldwide had soared to 13,703 — up from around 10,000 reported by the WHO on Saturday — but he stressed the increase was mainly due to previously unreported cases being added to the statistics.

His cautious optimism on Liberia came a day after the Red Cross offered hope that progress was being made in the battle against the killer virus, noting a sharp drop in the burials it was being called on to carry out.

Health authorities in Liberia welcomed the apparent slowdown but echoed the call for caution issued by the WHO and MSF.

Deputy health minister Tolbert Nyensuah said that even if it managed to achieve no new cases, Liberia would not be able to consider itself Ebola-free until neighbors Guinea and Sierra Leone had eradicated the virus.

“We cannot do this alone — we have to do it regionally. Liberia went down around April, and we never had a case for about 60 days, but then Guinea and Sierra Leone were still reporting, so we had resurgence and reoccurrence of the disease as the second wave.”

He said however that Liberia, too, had evidence of the slowdown, with burials less frequent, lab confirmations down and reports of new cases “decreasing exponentially”.

MSF warned that the epidemic had made obtaining treatment for malaria, which is endemic in Liberia, almost impossible in the capital, because of the “collapse of the healthcare system”.

The majority of Monrovia’s primary health centers are closed, with staff too afraid to work, MSF said, and in the rare clinics remaining open, patients showing fever are sent to Ebola centers.

“The first symptoms of malaria are the same as those of Ebola,” said Chibuzo Okonta, MSF’s deputy director of emergency programs.

“They include fever, headache and overwhelming fatigue. We decided to give this antimalarial treatment to both children and adults. It treats and prevents the disease.”

The agency said it had begun distributing antimalarial to around 300,000 people in the city’s poorest, most densely-inhabited neighborhoods.

“The objective is also to eliminate the risk that patients with fever, suspected of having Ebola, will end up in Ebola treatment center in contact with infected persons,” Okanta added.

Malaria remains the leading cause of death in Liberia, with 1.7 million cases in 2012 according to the health ministry, 1,800 of them fatal. – Rappler.com