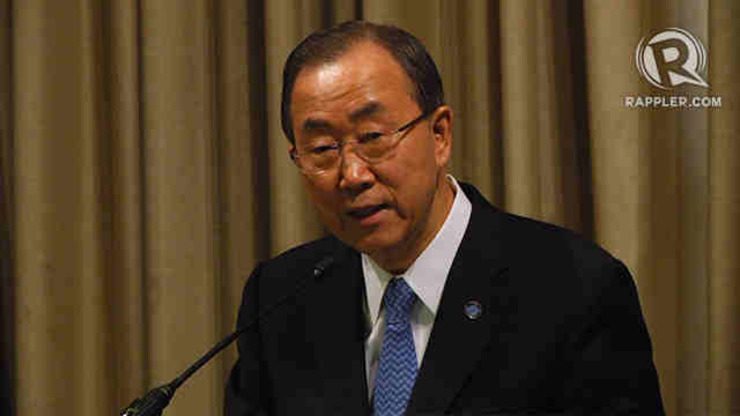 Facebook Twitter Copy URL
Copied
'The mutilation of girls and women must stop in this generation, our generation,' says UN chief Ban Ki-moon

NAIROBI, Kenya – UN chief Ban Ki-moon launched on Thursday, October 30, a global campaign to end the often deadly practice of female genital mutilation (FGM) within a generation, as survivors said it had “shattered” their lives.

“The mutilation of girls and women must stop in this generation, our generation,” Ban said on a visit to the Kenyan capital Nairobi.

“Men and boys must also be encouraged to support the fight against FGM — and they should be praised when they do.”

FGM ranges from the hacking off of the clitoris to the mutilation and removal of the entire female genitalia, and is carried out from the youngest babies to teenagers.

More than 125 million women have been mutilated in 29 countries in Africa and Middle East, according to the World Health Organization (WHO), which condemns the practice as a “violation of the human rights” of women.

Communities originally from those countries have also carried the painful tradition to Western nations.

“It is not culture, it is a violation of human rights,” FGM survivor Kakenya Ntaiya said at the launch of the campaign.

“Girls’ dreams, their hopes, their lives are being shattered.”

Apart from the intense pain itself, immediate dangers include bleeding and infection.

In the longer term, risks include infertility and complications during childbirth, sometimes resulting in the death of the baby.

While illegal in multiple nations, FGM continues to be carried out in secret, often in basic conditions without anesthetic.

Ntaiya, a 36-year-old Kenyan mother of two, described the intense pain and damage caused when she was cut as a young girl, still a common practice for the Maasai people she comes from.

“It was devastating undergoing the cut, it was horrible and very painful,” she told Agence France-Presse. “I would never wish for any young girl to undergo that.”

Campaigners call the dangerous practice mutilation rather than the term female circumcision, so as to make clear the dangers it involves and harm it causes.

“When I underwent the practice, it was celebrated, we didn’t know it was against the law,”  Ntaiya added. “But today, the story is different. Why are we letting it happen?”

Kenya outlawed FGM in 2011, with practitioners punishable by a minimum three-year jail term or fine, and life imprisonment if the procedure causes death.

Ban launched the campaign in Kenya at the end of a Horn of Africa visit to Ethiopia, Djibouti and Somalia, a region where FGM is a major problem.

The campaign, which follows the adoption by the UN General Assembly in 2012 of resolution to eliminate FGM, was first launched in Britain by journalist Maggie O’Kane from the Guardian newspaper.

O’Kane, who said an estimated 20,000 girls are at risk of FGM in Britain, started a petition that successfully made the government order the dangers of FGM be taught in schools.

That work won the support of Ban, who called for journalists to spread the message about the risks and consequences FGM, with grants to encourage reporters to write stories.

“Change can happen with sustained media attention on the damaging public health consequences of FGM,” Ban said. “With your help, we will succeed.” – Rappler.com