Nov 1, 2014 8:29 AM PHT
Facebook Twitter Copy URL
Copied
Army chief Navere Honore Traore says he would take power 'in line with constitutional measures,' a move which will prove hugely unpopular with the protesters, who see him as a close ally of Compaore 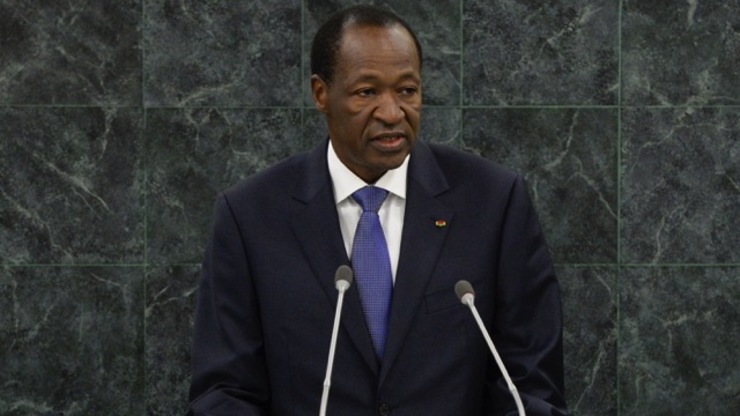 OUAGADOUGOU, Burkina Faso – Burkina Faso’s embattled President Blaise Compaore announced on Friday, October 31, that he was stepping down to make way for elections after a violent uprising against his 27-year rule.

His resignation came as tens of thousands of protesters demanded that he quit immediately after a day of unrest that saw mass demonstrations, with protesters storming and setting fire to parliament.

Observers have drawn a parallel between the protests and the Arab Spring, while the situation is being closely watched across Africa, where at least 4 heads-of-state are pushing constitutional change to cling to power.

“In order to preserve the democratic gains, as well as social peace… I declare a power vacuum to allow the establishment of a transition leading to free and fair elections within a maximum of 90 days,” Compaore said in a statement read on local television.

Army chief Navere Honore Traore said he would take power “in line with constitutional measures”, a move which will prove hugely unpopular with the protesters, who see him as a close ally of Compaore.

“We do not want General Traore in power. We need someone credible. Traore is Blaise Compaore’s henchman,” said Monou Tapsoaba, an activist with the opposition People’s Movement for Progress.

A French diplomatic source who wished to remain anonymous said Compaore had left the capital Ouagadougou and fled south, although he was still in the country.

The president had initially rejected calls to resign, prompting the demonstrators to gather outside the city’s military headquarters, chanting: “Blaise, get out!” (READ: Burkina Faso parliament set ablaze in protests over president)

France’s President Francois Hollande vowed that Paris would “contribute to calming” the situation in its former colony, adding that he was sure Compaore would “take the right decision in the coming hours to achieve the calm necessary”.

The EU called for the people of Burkina Faso to have the final say in who rules their country.

“The European Union believes that it is up to the people of Burkina Faso to decide their own future. Any solution must be the result of a broad consensus and respect the constitution,” a spokesman for the bloc’s diplomatic service said.

The protests on Thursday, October 30 forced Compaore to withdraw plans to try to change the constitution to extend his rule, although he had then vowed to stay in power for another year under a transitional government.

The protests started as lawmakers prepared to vote on legislation that would allow 63-year-old Compaore to contest elections in November 2015.

They have plunged Burkina Faso into its worst crisis since a wave of mutinies shook the country in 2011.

Compaore was only 36 when he seized power in a 1987 coup in which his former friend and one of Africa’s most loved leaders, Thomas Sankara, was ousted and assassinated.

He has remained in power since, re-elected president 4 times since 1991 – to two 7-year and two 5-year terms.

Compaore is one of a number of sub-Saharan African leaders who have stayed in power for decades.

His bid to cling to power has angered many, particularly young people in a country where 60% of the population of almost 17 million is under 25.

Many have spent their entire lives under the leadership of one man and are disillusioned by the establishment running the poor former French colony, which is stagnating at 183rd out of 186 countries on the UN human development index.

Some Burkinabe protesters have likened the protest to the Arab uprisings that began in 2010.

Burkina Faso’s army chief announced on Thursday that the government had been dissolved.

The army imposed a dusk-to-dawn curfew and pledged to restore constitutional order within 12 months, in a statement signed by Traore.

But leading opposition politician Benewende Sankara described the army’s move as a “coup”.

Many of the tens of thousands massed on the streets of the capital called for retired general and former defense minister Kouame Lougue to take control, shouting: “Lougue in power!”

There were reports that Traore had met Lougue to discuss the crisis.

Opposition leaders gave the death toll from Thursday’s violence as “around 30”. AFP was only able to confirm 4 deaths and 6 seriously injured, based partly on reports from the capital’s main hospital.

Envoys from the UN, the African Union and the Economic Community of West African States (ECOWAS) were expected Friday in Burkina.

Known in colonial times as Upper Volta, the landlocked country became independent from France in 1960 and its name was changed to Burkina Faso (“the land of upright men”) in 1984. – Rappler.com