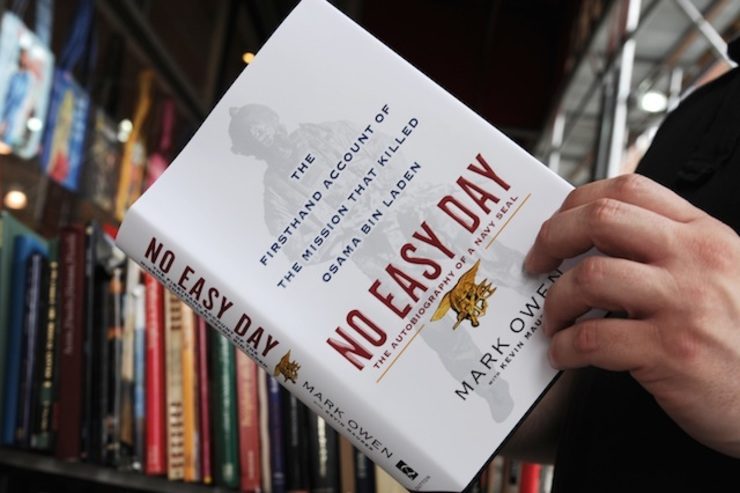 Facebook Twitter Copy URL
Copied
The strict code of humble anonymity represented a 'life-long commitment and obligation' and those who flouted it were no longer teammates 'in good standing," a letter from a top official read

WASHINGTON DC, USA – The commander of US Navy SEALs has issued a stinging rebuke to troops who have broken the elite force’s hallowed tradition of secrecy and humility by publishing memoirs and speaking to the media.

Days after the Fox News network announced it would broadcast a documentary with a commando who claims to have shot Osama bin Laden, Rear Admiral Brian Losey, the head of Naval Special Warfare Command, wrote to his troops denouncing anyone who seeks fame or fortune by revealing details of secret missions.

“A critical tenet of our Ethos is ‘I do not advertise the nature of my work, nor seek recognition for my actions,'” Losey and the top enlisted sailor, Force Master Chief Michael Magaraci, wrote in the letter, obtained by Agence France-Presse on Monday, November 3.

“We do not abide willful or selfish disregard for our core values in return for public notoriety and financial gain, which only diminishes otherwise honorable service, courage and sacrifice,” said the letter dated October 31.

The strict code of humble anonymity represented a “life-long commitment and obligation” and those who flouted it were no longer teammates “in good standing,” it said.

The commander warned in the letter that “we will actively seek judicial consequence for members who willfully violate the law” by revealing classified information.

The documentary titled “The Man Who Killed Usama Bin Laden” is due to air next month. Fox News said it had no plans to cancel the program.

“Fox News has not been contacted by the Department of Defense or any other government agency expressing concern about ‘The Man Who Killed Usama Bin Laden’ special and we have every intention of airing it as planned on November 11th and 12th,” spokesperson Carly Shanahan told Agence France-Presse.

The Pentagon could not confirm if the commando identified in the documentary took part in the May 2011 raid but said all troops are legally bound by non-disclosure agreements promising never to discuss classified information, even after they retire from the military.

“If in fact this individual was associated with the military unit that carried out the UBL (Osama bin Laden) raid, which is yet to be determined, he is still bound by his Non-Disclosure Agreement to not discuss classified information, especially in a nationally televised interview,” spokesperson Commander Amy Derrick-Frost said in an email.

For a force known as the “quiet professionals,” the 2011 Bin Laden raid thrust an intense public spotlight on the highly-trained troops, with publishers and producers keen to sell their stories to a hungry audience.

Another Navy SEAL who was part of the team that carried out the May 2011 raid on Bin Laden’s Pakistani compound, Matt Bissonnette, ran into trouble by publishing a memoir without submitting it to the Pentagon for review beforehand.

The US government accused him violating his legal obligation to allow the Defense Department to check the manuscript before publication to ensure no sensitive secrets would be exposed.

Bissonnette’s lawyer has been in talks with government attorneys to try to settle the dispute but the commando remains under criminal investigation, officials said.

Bissonnette’s book, “No Easy Day,” was a best-seller and now he is poised to release a new memoir, “No Hero: The Evolution of a Navy SEAL.” But this time he agreed to the Pentagon vetting the manuscript before publication. – Rappler.com