How plywood started the destruction of Indonesia’s forests 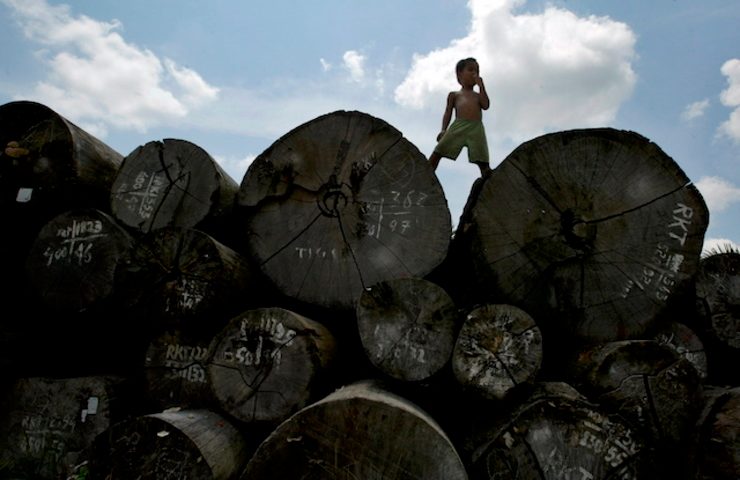 Indonesia now has the has the fastest rate of deforestation in the world, driven largely by clearing for palm oil plantations. But the process began long ago, with one of the most common building materials: plywood.

As far as commodities are concerned, it was plywood that defined the rainforests of Borneo in the 1970s and 80s, clearing the way for pulp and paper, and the booming palm oil industry.

Indonesia was once the second-largest tropical rainforest in the world (after the Amazon), a position it has relinquished to the rainforests of the Congo.

The flora of Borneo has about 15,000 species — richer than the whole continent of Africa, which is 40-times larger.

As many as 315,000 orangutans lolled in the branches of the giant dipterocarp forests in Borneo. Now it is estimated only 27,000 orangutans are left. I recently bought my very first guitar. The strong straight wood grain of the impeccably-finished instrument tells me it came from a tropical rainforest tree — a tree that may have reached 45 meters high. This tree was felled to provide the plywood that backs my guitar.

Plywood is one of the most common building materials. You will likely find it in your house, in part of your furniture and your boat.

The strings that tie us to the paradise forests of Borneo twine through our financial institutions, our lawmakers and the stuff we began to buy in the 1950s.

In America — and Japan where my guitar was made — plywood fuelled the booming post-World War II building industries.

The story of plywood

In 1966, the Indonesian economy was in a bad way. General Suharto became President under dubious circumstances after inciting the bloody year of living dangerously, a massacre that killed perhaps one million communist sympathizers.

The International Monetary Fund, the World Bank, Australia and Japan together organized financial assistance through a development plan to attract private foreign investment. Development was a neat new narrative in the 1960s. But it silenced other narratives such as conservation and the rights of indigenous people.

With the help of western economic advisers, Suharto became known as the “Father of Development”. His development order crafted the basic forestry law of 1967 and associated foreign investment laws. These laws designated 143 million hectares — three-quarters of all of Indonesia’s land area — as Forest Area.

Unambiguous exploitation rights were granted to private firms and their domestic partners for generous logging concessions, already inhabited by Indigenous Dayak groups. Despite millenia of presence, these traditional rights were subsumed to twentieth century logging firms.

Displacement of these peoples, and transmigration of 7 million Javanese redistributed poverty to devastating affect. Ultimately the great fire of Borneo in 1982-83, the worst forest fire then known, was started by poor farmers clearing land for subsistence cropping.

In May 2014, Indonesia’s Human Rights Commission launched the first national inquiry into violations related to land and forests.

A tale of corruption

Indonesia’s forests were first marketed to the Philippines, a country that holds the inimical record for 20th century deforestation.

The Philippines saw an astonishing logging spree of 30 million hectares, 80% of the country, stripped bare in 3 decades. In 1972, the feverish scramble resulted in more concessions offered than forest available.

A comprehensive study of logging in Indonesia showed that in 3 years from 1967 to 1970, logging concessions covering over 53 million hectares were virtually gifted to global logging companies.

Mirroring practices honed in the Philippines, companies such as US Wyerhauser and Georgia-Pacific, and Japanese Mitsubishi were guaranteed the free repatriation of profits and tax holidays while, between 1969 and 1974, the export price of Indonesian logs rose 600%.

By 1979, Indonesia was the world’s leading producer of tropical logs, with 40% of the global market.

By 1987, Apkindo’s predatory pricing strategies had captured three quarters of the American import market, and 67% of the global market for tropical plywood with immense profits channeled to Hasan and Suharto’s inner circle.

One of the biggest logging companies in the world in 1970 was American Georgia Pacific. Its local partner was Bob Hasan, a close friend and business partner of President Suharto. To staunch the flow of windfall profits leaving the country (as logs) and refocus them on the central leadership Hasan re-formed the entire forestry industry by setting up a monopoly of globally lucrative plywood.

In 1981, the ban on logs leaving the country saw the exit of many big foreign investors dragging down the domestic value of logs and provided cheap raw material for plywood mills.

The Indonesian Wood Panel Association (Apkindo), controlled by Hasan, was given extraordinary powers by Suharto, including sole authority to grant export licenses to plywood makers, and the power to sanction any company that breached its rules.

Apkindo flooded the world’s plywood export market. By 1987, Apkindo’s predatory pricing strategies had captured three quarters of the American import market, and 67% of the global market for tropical plywood with immense profits channeled to Hasan and Suharto’s inner circle.

By 1994 Hasan was one of the richest men on earth.

In 1997, in an Orwellian twist, Bob Hasan was even awarded a US medal for his environmental achievements in building a giant pulp and paper mill, and an honorary professorship.

But by then concern at the loss of forests had began to emerge enflamed, in 1997-98, by the largest forest fire ever known that burned 5 million hectares of rich dipterocarp forest, and killed one third of all orangutans. If it were people, think of a fire that wipes out the population of China, the US, and Europe.

It was only at the turn of this century that someone finally looked at what was happening to Indonesia’s forest estate. The 2002 report “Where have all the forests gone” by Derek Holmes was shocking. It shows graphs of forest cover that slope inexorably toward zero.

Extrapolated downward, the slopes show no lowland rainforest for Kalimantan (Indonesian Borneo) by 2010, and no forests at all by 2035. In 2014 it’s not quite as bad as Holmes predicted but it’s pretty bad.

Nearly 60% of Kalimantan’s lowland forest is gone, and any rainforest that remains is being cleared faster than ever to feed consumer demand for paper and oil palm.

And as for my guitar, Yamaha has a policy that recognizes unsustainable harvesting practices and procurement guidelines that focus on planted forests, ironically on plywood from plantations that now grow on land cleared of rainforest. – Rappler.com

Penny van Oosterzee is Director of Biome5, a University Fellow at Charles Darwin University and Senior Research Adjunct James Cook University, and a partner in an ARC research project on cost-effective restoration for biodiversity and carbon outcomes. She has a PhD focused on the Ecosystem Sector and Climate Change. She receives funding from the Biodiversity Fund for a rainforest restoration project in the Wet Tropics. She is a partner of an Australian Research Council project on cost-effective reforestation for carbon and biodiversity benefits.

This article was originally published on The Conversation as part of a series on how the products we buy affect the world’s rainforests, in the lead up to the Asia-Pacific Rainforest Summit in Sydney.