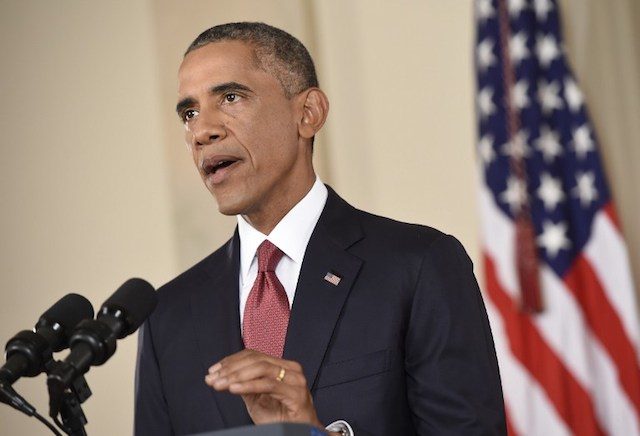 Facebook Twitter Copy URL
Copied
(UPDATED) The immigration plan, which the US President says is 'lawful,' is expected to shield from deportation up to 5 million of the estimated 11 million undocumented migrants in the US

WASHINGTON DC, USA (UPDATED) – US President Barack Obama on Thursday, November 20, bared what he called a “lawful” immigration plan that offers temporary relief from deportation to millions of undocumented migrants in the United States.

“There are actions I have the legal authority to take as President, the same kinds of actions that were taken by Democratic and Republican presidents before me,” Obama said in a nationally-televised broadcast from the East Room of the White House, as he announced the widely-anticipated executive action.

“I want to work with both parties to pass a more permanent legislative solution. And the day I sign that bill into law, the actions I take will no longer be necessary,” the President said in his address.

Obama said the plan to grant “deferred action” would apply to two groups.

“If you’ve been in America for more than 5 years; if you have children who are American citizens or legal residents; if you register, pass a criminal background check, and you’re willing to pay your fair share of taxes – you’ll be able to apply to stay in this country temporarily, without fear of deportation. You can come out of the shadows and get right with the law,” he said.

The order may protect up to 5 million of America’s estimated 11 million undocumented migrants from deportation.

‘Not an amnesty grant’

Obama clarified that the action is not the same as an amnesty grant, as claimed by critics, nor would it lead to US citizenship.

“It does not grant citizenship, or the right to stay here permanently, or offer the same benefits that citizens receive – only Congress can do that. All we’re saying is we’re not going to deport you,” he said.

The President also said that deportation efforts would be focused on criminals.

“We’re going to keep focusing enforcement resources on actual threats to our security. Felons, not families. Criminals, not children. Gang members, not a mom who’s working hard to provide for her kids. We’ll prioritize, just like law enforcement does every day,” he said.

The White House has long wanted to pass a broad immigration reform package that would offer a path to citizenship for young migrants that grew up in the US.

The Republican House of Representatives blocked it and failed to agree on its own alternative proposal.

Republic National Committee (RNC) chairman Reince Priebus slammed the plan, saying that while the US is a “nation of immigrants” as described by the President in his address,  it is also “a nation of laws and limited executive power.”

“We agreed with the President when he said, ‘his notion that I can just change the laws unilaterally is just not true.’ We wish he had kept his word to the American people. The Constitution does not grant the President the power to act as a one-man legislature when he disagrees with Congress and with voters,”  Priebus said in a statement.

He also questioned the timing of the move. “If he believed that his actions were urgent and that he had the constitutional authority all along, why did he wait 6 years into his presidency to act?”

Priebus added: “I am confident that the Republican Congress will do everything within their power to uphold the Constitution. The American people rejected the administration’s policies during the midterms; they will do so again in 2016.”

White House lawyers and many outside experts believe Obama has the constitutional authority to act, and administration spokesman Josh Earnest had said prior to the scheduled announcement that Obama’s action would not be unprecedented.