Facebook Twitter Copy URL
Copied
(UPDATED) Protest marches spring up in cities across the United States as a huge security operation stifles clashes in Ferguson, the town at the center of the country's latest racially-charged riots

FERGUSON, Missouri, USA (UPDATED) – Protest marches sprang up across the United States on Tuesday, November 25, and police battled to stifle another night of unrest in Ferguson, ground zero of America’s latest racially-charged riots.

Violence erupted in the St Louis, Missouri suburb for a second night, after Monday’s (November 24) decision by a grand jury not to prosecute a white police officer for shooting dead an unarmed black teenager in August.

Windows were smashed at city hall, a police car was set on fire and protesters pelted police with rocks, bottles, chunks of concrete and a Molotov cocktail, St Louis County police said.

Demonstrators also threw bottles appearing to contain urine, said county police chief Jon Belmar. He said 44 arrests were made, but that in general the night was calmer than Monday, when the town saw rampaging looters, much gunfire from rioters and at least 12 buildings set on fire.

This time police only used tear gas once, Belmar said.

“I think generally it was a much better night,” Belmar told reporters.

Missouri Governor Jay Nixon said the National Guard force in the Ferguson area had been tripled to more than 2,000 troops to back up the beleaguered local police force.

Early in the night at the Ferguson police station riot police dispersed around 100 protesters chanting and waving placards, including one that read: “We will not be silenced.”

Crowds were smaller than they had been on Monday. But masked agitators on the fringes of the demonstration clashed with police. Later, the violence worsened.

Meanwhile, thousands of marchers snaked along streets and freeways, disrupting traffic on bridges and in tunnels in New York City – leading to a number of arrests.

A peaceful crowd took to the streets in Washington outside the White House. 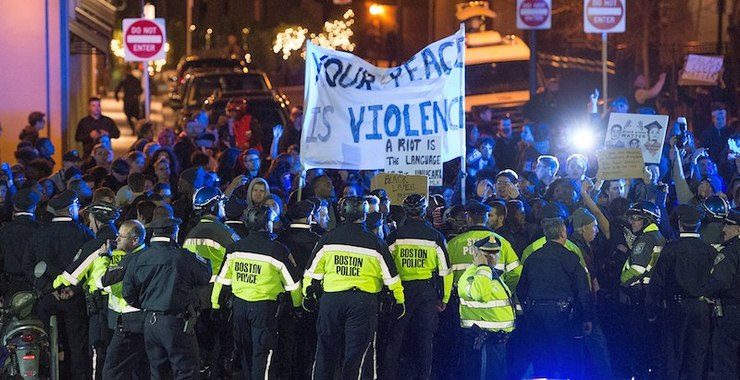 Similar angry but largely peaceful protests took place across the country, from Oakland and Seattle on the west coast to Atlanta, Philadelphia and Baltimore in the east.

In Portland and Denver police reportedly resorted to pepper spray.

CNN reported that gatherings large and small had been reported in 170 communities nationwide.

US President Barack Obama called for rioters to be prosecuted, but acknowledged the deep-rooted frustrations of minorities who feel they are unfairly treated by police.

“Burning buildings, torching cars, destroying property, putting people at risk. That’s destructive and there’s no excuse for it. Those are criminal acts.” Lawyers for the family of slain youth Michael Brown denounced the prosecutor whose grand jury hearing found that police officer Darren Wilson had killed the 18-year-old in self-defense.

“This process is broken. This process should be indicted,” Brown family lawyer Benjamin Crump told a news conference.

Crump criticized the way Wilson had not been cross-examined when he appeared before the grand jury, which decided not to indict him over the August 9 shooting.

But in his first televised comments since the incident, Wilson told ABC News he had feared for his life during the confrontation, believing Brown was attempting to wrestle his gun away from him.

“I can feel his hand trying to come over my hand and get inside the trigger guard and try to shoot me with my own gun,” Wilson said.

Asked if he believed he would have acted the same way if Brown was white, Wilson responded: “No question.”

The officer said he was comfortable that he had acted correctly.

“I don’t think it’s haunting. It’s always going to be something that happened,” he said, adding that his conscience was clear because “I know I did my job right”. Separate protests flared, meanwhile, in Cleveland, Ohio, following the fatal shooting by police of a 12-year-old black boy holding a toy gun at the weekend.

Despite appeals by Brown’s family for calm in Ferguson on Monday, protests rapidly degenerated into looting, arson and running street battles between police and stone-throwers.

“His current employment status has not changed,” Knowles said.

The August shooting of Brown sparked weeks of protest and a debate about race relations and military-style police tactics.

The Ferguson grand jury concluded Wilson had acted lawfully in firing 12 shots at Brown after he first reached into the officer’s car to grapple with him, then turned on him as he gave chase.

Brown’s death, the aggressive police response to protests and now the result of the grand jury hearing have stirred racial tensions in Ferguson, a mainly black suburb with a mostly white police force.

The town’s community of 21,000 has been on edge since the shooting, and residents complain of years of racial prejudice and heavy-handed police tactics. – Rappler.com