JAKARTA, Indonesia – The election of Golkar Party’s chairman this week in Bali and the visit of London Mayor Boris Johnson to Jakarta lead our wrap of stories from Indonesia over the weekend.

1. Not good for Jokowi: Bakrie poised to maintain control of Golkar

Despite efforts by his rivals to derail him, Aburizal Bakrie – the tycoon turned would-be presidential candidate turned opposition leader – is poised to be re-elected on Monday or Tuesday, December 1 or 2, as chairman of the influential Golkar party. This means Golkar would unlikely join forces with President Joko “Jokowi” Widodo, and the president will likely have to contend with a strong opposition throughout his term.

Despite backing the losing presidential candidate, Aburizal has defied predictions that Golkar – a party which had never been in the opposition – would abandon him. Supporters say he still managed to lead Golkar into becoming the second largest faction in the House of Representatives and secured strategic posts. But his rivals plan to hold a shadow party convention on January 15. Read the full stories on Businessweek and the Jakarta Globe. London Mayor Boris Johnson was apparently so inspired by Jakarta’s car-free Sundays that he’s considering the same for his city. “Wasn’t that sensational? I was blown away by the popularity of the car-free Sunday here,” he said on Sunday, November 30, after a bike ride in the capital with Jokowi and Jakarta Governor Basuki Tjahaja Purnama as part of a 6-day regional tour. The key roads of Sudirman and M.H. Thamrin in Jakarta’s central business district are closed to motorists on Sunday mornings, leaving it free for thousands of people to run, skate, or bike in. “We have been thinking about it for ages. I don’t think you are going to get the British people out of bed at six in the morning to do it quite like that but it is certainly food for thought,” he said. Read the full story from BBC. 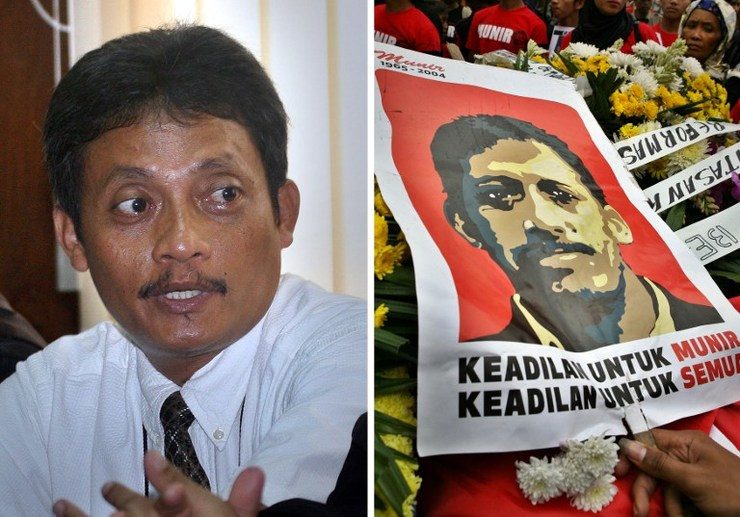 “The parole destroyed the sense of justice and democratization in Indonesia,” said Choirul Anam, the lawyer of the wife of human rights activist Munir Said Thalib, who was killed by arsenic poisoning on a Garuda Indonesia flight from Jakarta to Amsterdam via Singapore in 2004. The convicted assasin, former Garuda Indonesia pilot Pollycarpus Priyanto, walked out of prison on parole on Friday, November 28, 8 years into his 14-year jail term.

Though Pollycarpus was technically eligible for parole, rights groups “regretted” the decision because they believe the mastermind – high-ranking officials in the State Intelligence Agency (BIN) – has not been punished, Agence France-Presse reported. The head of BIN at the time, A.M. Hendropriyono, was never charged and is now an advisor of Jokowi. The new government made positive headlines recently after Administrative and Bureaucratic Reform Minister Yuddy Chrisnandi issued a ban on lavish weddings for state officials and their families. But both Jokowi and Vice President Jusuf Kalla were seen on Saturday, November 29, attending one such lavish wedding – that of Indonesian Military (TNI) commander Gen. Moeldoko’s 28-year-old son, Randy Bimantoro. The event at the Jakarta International Expo in Kemayoran, Central Jakarta, was also attended by PDI-P chairwoman Megawati Sukarnoputri, Gerindra Party chairman Prabowo Subianto, and former President Susilo Bambang Yudhoyono, according to the Jakarta Post. To be fair, the new rule – which states occasions like wedding receptions should have no more than 1,000 participants – will only go into effect in January.  – Rappler.com